After close-up look at priestly ministry, he’s ready for ordination 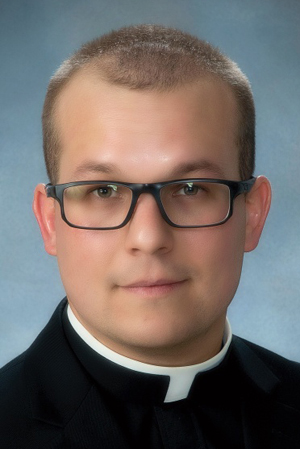 Rev. Mr. Patrick Muka will be ordained a priest May 19 at the Cathedral Basilica of SS. Peter and Paul.

When Patrick Muka was in third grade at St. Raphael School in Hamilton, N.J., he wrote in a letter he would like to be a military chaplain when he grew up. To his surprise his mother saved and treasured it.

The path from that letter to fruition hasn’t been a straight line, but this childhood dream will be at least partially fulfilled on May 19 when Patrick will be ordained to the priesthood. It won’t be for the Military Ordinariate or for the Diocese of Trenton. It will be for the Archdiocese of Philadelphia at the hands of Archbishop Charles Chaput at the Cathedral Basilica of SS. Peter and Paul.

When he was growing up the youngest of three children of John and Patty Muka and preceded by his brother and sister, Brian and Patty, their parish was St. Vincent de Paul in Yardville, N.J. Religion was important in the family. On the way home from Sunday Mass John Muka might grill the kids on what the Gospel was and what the homily was about.

After St. Raphael School Patrick continued on to Grice Middle School and Hamilton West High School. He then accepted an ROTC scholarship to Drexel University with the view of possibly becoming a naval officer, which explains how he landed on the west side of the Delaware River.

As a freshman at Drexel his grades in engineering were high and also his ROTC training was going well, but somehow he didn’t feel fulfilled. That childhood dream of the priesthood was stirring. He thought about the Jesuits and the Franciscans. Then in May 2008, he went to an overnight discernment program at nearby St. Charles Borromeo Seminary, and at a holy hour he prayed.

“I asked the Lord if he wanted me to pursue the priesthood,” he recalls. “There was a pronounced voice, ‘Come and see.’ It’s surreal in a way, it’s a gift from God. He chose me, I didn’t choose him.”

His mother was thrilled because it was her dream that one of her children would choose a religious vocation, but his father took a lot more convincing. This meant throwing away a perfectly good scholarship to an excellent university after a single year.

But he too came around and that fall Patrick Muka entered St. Charles Borromeo Seminary, technically from St. Andrew Parish in Newtown, where Msgr. Michael Picard agreed to sponsor him. 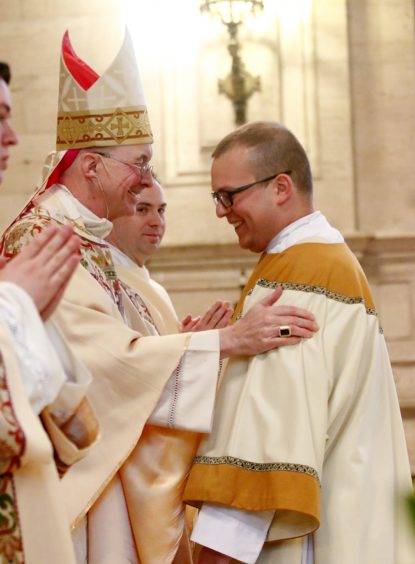 Bishop Timothy Senior congratulates Deacon Patrick Muka during his ordination as a transitional deacon in May 2017. He will be ordained a priest May 19. (Sarah Webb)

He had to repeat his freshman year because engineering and philosophy are two different animals.

He completed his four years in the College Division and first two years of theology studies before he hit a dry spot and asked for and received a leave of absence while he reflected further on his future course.

During his leave of absence he first worked in the dementia unit of a nursing home, among other things. He stayed active in his spiritual life especially through the Legion of Mary, a devotion he first encountered at St. Charles, and through the recitation of the rosary.

At the beginning of 2016 as a prelude to returning to the seminary he took up residence in the rectory of Our Lady of Grace Parish in Penndel, shadowing Father William Dooner, the pastor, and Father Robert Gross, the parochial vicar. Patrick assisted in little ways in the school and visiting the sick while experiencing what the life of a parish priest is really all about. “I was fortunate to be able to do this,” he said.

He returned to St. Charles Seminary in the fall of 2016. His former classmates had just been ordained and now he was in a new group.

His deacon assignment was at Our Lady of Perpetual Help Parish in Morton under the guidance of Msgr. John Savinski.

Now Patrick’s long journey toward ordination is coming to completion.

“It is awesome,” he said. “Through this, God gives to me the gift of his own love with his people.”

Patrick’s advice for others who are following this path is, “find good priests to help you with your spiritual life.”

It certainly worked for him.

PREVIOUS: For Penn grad soon to be priest, peace comes with achievement

NEXT: New abbot leads ‘ministers of peace and reconciliation’ for church