For Penn grad soon to be priest, peace comes with achievement 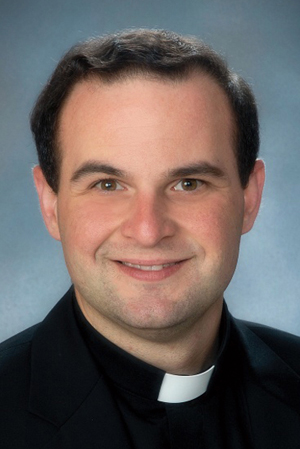 Eric Banecker is now a transitional deacon who will be ordained a priest for the Archdiocese of Philadelphia on May 19, but others saw that possibility before he realized it himself. He recalls as far back as grade school at Epiphany of Our Lord School in Philadelphia suggestions were made that he should consider the priesthood.

He comes from a solid, churchgoing family, including his parents Eric and Joanne, younger sister Jackie and brother Andrew, although that in itself isn’t a sign of a religious vocation. But while he was at Roman Catholic High School as a Connelly Foundation Neumann Scholar he sometimes thought about the priesthood, and also dated a bit.

After high school thanks to a Mayor’s Scholarship, Banecker headed for the University of Pennsylvania where he majored in English and classical studies. As a senior he was president of the Newman Catholic Center, which has the distinction of being the pioneer Catholic ministry in an American secular university.

That is where his natural talent for writing came to good use as he penned occasional op-eds defending church positions in Penn’s venerable student newspaper, The Daily Pennsylvanian.

Through the Newman Center Banecker also became acquainted with several priests who were chaplains during those years including Jesuit Father Phil Florio.

Also during this time he underwent the 19th Annotation of the Spiritual Exercises of St. Ignatius Loyola, a solo retreat experience, and he was guided by the now-deceased Jesuit Father Bruce Bidinger as his spiritual director.

“I did a lot of praying and discerning,” Banecker said. “I wanted to do something that would make me happy and it kept coming back to me that maybe I should be a priest and use whatever skills I had to contribute to the church. I got to know priests that were very happy in what they were doing and seemed like they were using their talents well.”

For a time he considered entrance into the Society of Jesus himself. But then again, “I felt connected to the local church and felt there was a great need here as well,” he explained.

Although the idea of a religious vocation was coming to the forefront, he hadn’t quite accepted it yet, and after graduation from Penn he took a position with the Archdiocese of Philadelphia in the Stewardship and Development Office.

One year later, after further prayer and discernment, he was thoroughly convinced that the priesthood was his vocation, and he entered St. Charles Borromeo Seminary.

During his years in the seminary, he discovered it was a good community of men. Not all stay through ordination, but those who do stay believe in what they are doing.

If there was a difference between the University of Pennsylvania and St. Charles Borromeo Seminary, other than emphasis on theological studies, it had to do with a general mantra, he found. At Penn the emphasis was that you can be whatever you want to be.

“There is nothing wrong with that,” Banecker said, “but there can be a bit of Pelagianism, ‘I can control everything, everything is about me.’  That leaves a bit of anxiety under the surface and the seminary made me a little calmer. It is good to step back and have that core of inner peace no matter what goes on.”

What the seminary did not do was stifle his gift for writing which was nurtured at Penn. At the seminary he not only took charge of the seminarians’ blog, Seminarian Casual, but he contributed thoughtful essays and interviews to a number of publications including CatholicPhilly.com, Our Sunday Visitor and First Things.

Yes, there have been scandals that may inhibit some potential religious vocations, but for Banecker, “the lesson is whatever you do you must do well. There are a lot of very talented, very gifted and very holy men here and they are supported by a good faculty,” he said. “You get out of it what you put into it and it can have a very good effect.”

Now as he completes that long journey toward ordination, Eric Banecker looks back on all of the excellent role models he had along the way, in family, in schools and in the seminary, whether it was parents or priests or businessmen. “They all left a mark on me,” he said.

PREVIOUS: Long road to priesthood began in Vietnam, will end in Philly

NEXT: After close-up look at priestly ministry, he’s ready for ordination