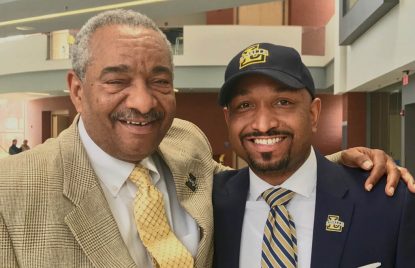 Ashley Howard stood a few feet away and listened to copious compliments from the school’s president and athletic director. Then it was his turn to speak.

In front of a packed audience on Monday, April 9, Howard was formally introduced as the 19th head coach of La Salle University’s men’s basketball program. After a long career as an assistant coach — the past five at 2016 and 2018 NCAA champion Villanova University — Howard is a head coach for the first time at any level.

“Having the track record of success wherever he’s gone and never having an interview (to be a head coach), sometimes I think he was disappointed with the whole profession,” said Mo Howard, Ashley’s father, himself a former star at St. Joseph’s Prep and Maryland University who played one season in the NBA. “But in his first interview, he nails it.”

Howard replaces former coach Dr. John Giannini, who mutually agreed with La Salle’s brass that a leadership change was necessary. Howard served as an assistant under Giannini for four years and then assisted his college coach, Drexel University’s Bruiser Flint, for the next four. After a one-year stint at Xavier University, Howard accepted an offer to assist Jay Wright at Villanova.

With his Catholic roots — an alum of both Gesu School and Msgr. Bonner High School (Class of 1999) — providing an essential foundation, Howard is prepared to support a philosophy that envelops the whole person and not just the basketball player.

“It’s definitely become a part of who I am,” said Howard. “Being part of a faith-based community where you have the opportunity to develop the entire person and not just an athlete is something I take a great deal of pride in. It’s something that’s very valuable that we’re going to incorporate into our program, and it’s something that has definitely helped me along the way.

“Being a part of the great history and tradition of Villanova, most people don’t realize that (Villanova men’s basketball chaplain) Father Rob Hagan is a great mentor of mine and someone who has helped me out immensely during my time at Villanova, and I’m looking forward to rekindling that same relationship with (La Salle men’s basketball chaplain) Brother Ed Sheehy.”

La Salle University president Colleen Hanycz is “thrilled” that Howard “shares and embraces the values of the Christian Brothers as mentors who touch hearts, stimulate minds and cultivate leadership.”

“It’s very important to me personally because more than anything he understands that underlying Catholic mission,” said Hanycz. “When I was talking to him the other day I said, you know, last year our students did 60,000 hours of community service. He nodded his head.

“That’s familiar to him. That’s a familiar model of what we are teaching our students — to be servant leaders from the first day — and that comes directly out of the church. Pope Francis issued a new papal exhortation today and we see that joy and that understanding that we are here to serve our neighbor. Ashley Howard gets that.”

“It’s extremely exciting because if we are true to what we say we are — that we are educating the whole person — athletics is a dimension of the whole Lasallian education to which we are committed,” he said. “Our new head coach has been here before so he knows this university. We are excited to have him back into the Lasallian world.”

Howard told his dad that he would be the second person he’d call after he received word. The first would be wife Arianna and little daughter Journey.

When the phone rang, the first words Mo Howard heard were, “Dad, I got the call.” Mo Howard knew precisely what that meant.

“He was pretty excited,” said a wistful Howard. “Not only does he get to stay home, he’s a part of the Big Five. If you’re from Philadelphia and you love basketball the way that we do, it’s pretty monumental.

“One of the things that I know about my son is his ability to bring families into these college environments and make everybody feel important. Another thing is, he has an innate ability to go and watch a kid play and think of how good he can possibly be two years later. I don’t know many coaches or many people who have that innate ability to do that.

“So having said that,” said Howard, a light mist forming in his proud eyes, “I think La Salle picked a pretty good guy to lead their program forward.”