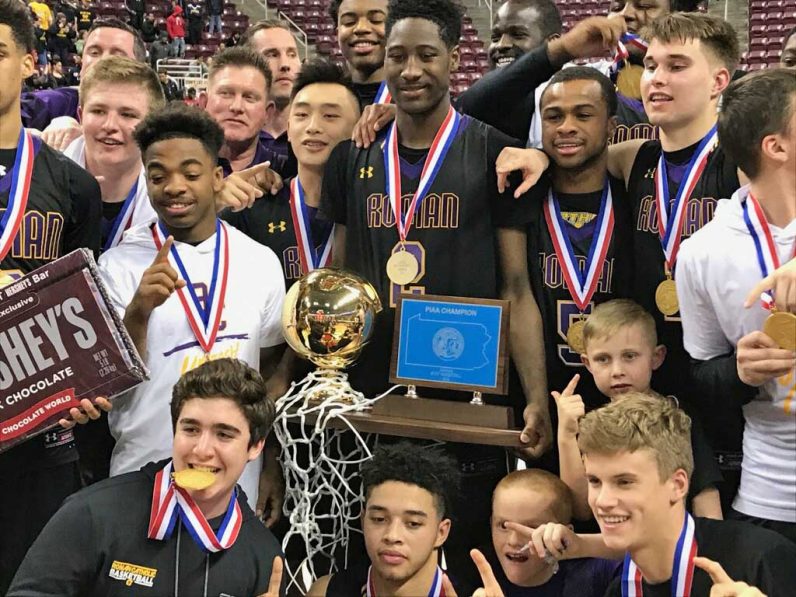 Roman Catholic celebrates their March 28 PIAA Class 6A state championship over Lincoln High, 92-80. It was the Cahillites third state title in the past four years. (John Knebels)

The scoreboard said the margin of victory was 12 points, but with 1:06 remaining, the lead was only two points.

Been there, done that.

On March 28 at the Giant Center in Hershey, Pa., Roman Catholic upended Lincoln, 92-80, to win the PIAA Class 6A state championship for the third time in the past four seasons.

Like most wins by the Cahillites, the game wasn’t decided until late.

“I think it’s poise, composure, leadership, experience,” said Roman Catholic second-year coach Matt Griffin. “We knew they were going to go on runs. They’re a good team. They weren’t going to go away.”

Over the final 66 seconds, the Cahillites outscored the Railsplitters by 10-0, including hitting six of seven from the line in crunch time. After falling behind by 8-1 early in the first quarter, Roman went ahead with a 20-10 spurt. The only time the Cahillites trailed again was at 33-32 late in the second quarter.

The victory helped avenge an 86-76 loss to Lincoln in the District XII championship.

All season long, Roman has endured elevator-like rides. The Cahillites, who also won their third Catholic League championship in four years, finished with a 24-6 overall record and snared 17 of their last 18. Of those 30 games, 17 were decided by 10 or fewer points; on 10 occasions, the margin of victory was five points or fewer.

Roman’s record in those nail biters were a sparkling 14-3 and 8-2, respectively.

“People kept thinking we would lose,” said Roman senior Allen Betrand. “When we were losing early, people figured that would be the game where we wouldn’t come back. But we weren’t worried no matter what the score was.

“Everybody doubted us,” Betrand continued. “Every game we played hard, and we proved everybody wrong.”

Lincoln (24-7) had major problems guarding the Cahillites because no matter who had the ball, he either scored or found a hot hand that could. Junior Seth Lundy (28 points), junior Hakim Hart (26), sophomore Lynn Greer III (20), and Betrand (14) combined to shoot 31 for 47 from the floor, 6 for 14 on three’s, and 20 of 26 from the foul line. The Cahillites assisted on 16 of their 33 overall baskets.

“We’re extremely hard to guard when we play that way,” said Griffin. “Share the basketball. Be selfless.”

“That’s definitely the type of game we want to see,” said Lundy, who added a game-high nine rebounds, five assists, two blocks, and two steals. “All four of us could get 20 or 30 points on any given night; us sharing the ball like that is special.”

“The Catholic League prepared us great for this,” said Lundy. “It’s definitely one of the best leagues in the country. The competition is crazy. On any given night, any team can beat another. You have to take every game one possession at a time.”

“They made us know that we lost by banging on the locker room door,” said Wild. “To come out with a win was big for us. From the beginning I thought we were gonna win. They wanted to come out and press us. We were ready for it.” 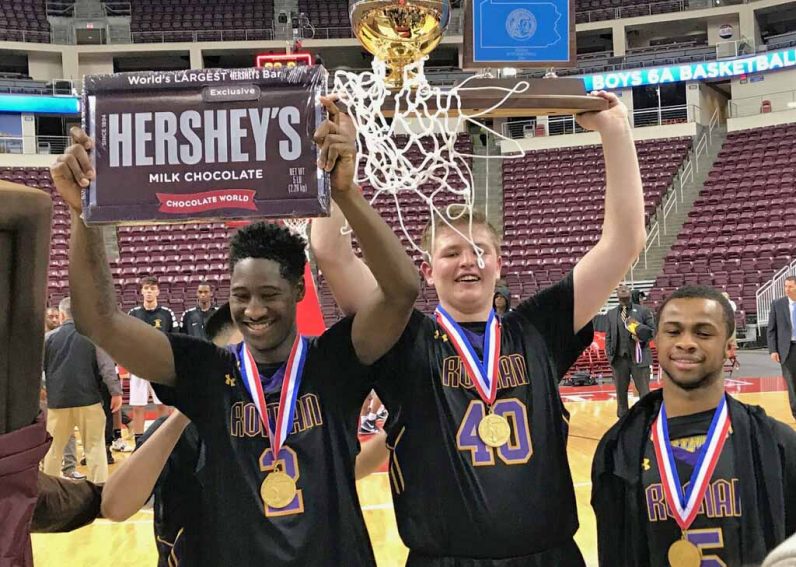 Hoisting their championship trophy, and a hefty keepsake from Hershey, the site of the tournament, are (from left) Allen Betrand, John Kelly and Nate Nicholson.