An unusual piece of advice: Talk about routines and rituals 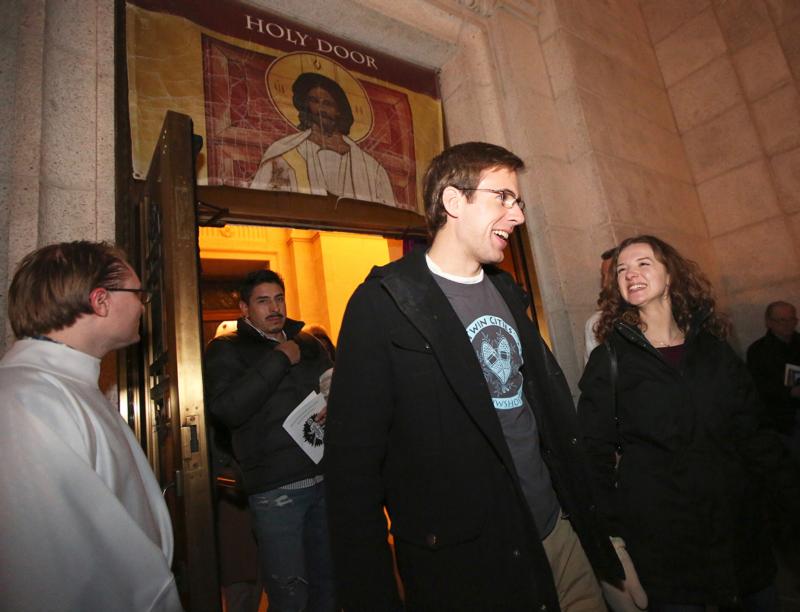 Jonathan Thompson and Julia Waletzko exit the Holy Doors at the Basilica of St. Mary in Minneapolis Nov. 20, 2016, just hours after they got engaged. “Love needs time and space; everything else is secondary,” Pope Francis writes in “Amoris Laetitia” (“The Joy of Love”). (CNS photo/Dave Hrbacek, The Catholic Spirit)

She sat in the passenger seat, pinning up her permed hair, fussing in the mirror. He was in the driver’s seat thumbing through a magazine. The year was 1949 and my grandparents were on a date in small-town Iowa.

On other dates they went to the roller-skating rink, they visited each other’s churches and families, they went fishing one hot day in August. Eventually they started to “talk serious” about things like religion and, eventually, marriage.

Their wedding preparations were simple by today’s standards: dress and suit, rings, invitations, some flowers to decorate the church. Wedding planning was less time-intensive than it is today, when couples feel pressure to “personalize” their weddings and throw the perfect party for their guests.

But my grandparents’ simple wedding preparations did not indicate lack of marriage preparation.

Almost 68 years after their wedding, my grandma lay in bed in a nursing home. My 92-year-old grandpa clasped her hand, whispering sweet words that brought the nurses to tears: “I need you. You are so pretty and your hair always looks so nice. I love you.”

Not in the best health himself, he could not be convinced to leave her side to go to his room. He slept in his chair until they eventually rolled his bed in beside hers, holding her hand for days until her soul slipped away.

Many who knew them commented that my grandparents were witnesses to marriage as it was meant to be — marriage as a sign of Christ’s love for the church.

How did they prepare for this kind of love? And can engaged couples learn from their experience?

The secret to their success was the habits they formed together — habits that prioritized their marriage.

It’s not that they had an easy marriage. In the early years, they had to work through personality and denominational differences. (At that time my grandma was Lutheran while my grandpa was Baptist.) They had to make ends meet as farmers living in a small tenant house.

My grandma was often sick, and they mourned the loss of their first child, who was stillborn a few days after his due date and not long before Christmas. Christmas festivities that year were “a strain,” my grandma wrote in her diary, and at times it was hard to keep from bawling in public.

These difficulties could have been enough to drive in a wedge of bitterness, as happens to many couples over time and trauma.

Growing up with my grandparents, what I noticed was not bitterness but a remarkable tenderness.

As Pope Francis notes in “Amoris Laetitia,” tenderness is a virtue “often overlooked in our world of frenetic and superficial relationships.”

My grandparents’ tenderness was cultivated over time and given life through daily rhythms and routines — it did not just happen like a wave or some natural force.

They woke up early each morning to read Scripture together and pray. They did this as newlyweds, as young parents, as empty nesters and retirees, and even in the nursing home.

They shared meals together every day, and once a week they would go into town to get groceries and a meal and coffee at McDonald’s. My grandpa would bring Hershey’s miniatures in his pocket, and they’d share a sweet treat and time together.

“Love needs time and space; everything else is secondary. Time is needed to talk things over, to embrace leisurely, to share plans, to listen to one another and gaze in each other’s eyes, to appreciate one another and to build a stronger relationship,” writes Pope Francis.

Once married, it is surprisingly difficult to find the time and space that love needs. What we prioritize in the abstract doesn’t always translate into the way we live daily, and we find ourselves living out of sync with our most cherished values.

Too often, the important succumbs to the tyranny of the urgent, and as is the case for my husband David and me, eight years of marriage go by and we find ourselves asking, “How is it that we still don’t pray together regularly when we say this is a priority of ours?”

Pope Francis writes: “Young married couples should be encouraged to develop a routine that gives a healthy sense of closeness and stability through shared daily rituals. These could include a morning kiss, an evening blessing, waiting at the door to welcome each other home, taking trips together and sharing household chores.”

During our engagement, I wish David and I had talked seriously about the habits we hoped to form in our new life together; we dreamt about the future, describing in broad brushstrokes our long-term goals and wondering about the journey God would take us on. That was beautiful and worthwhile.

But I wish we had also thought about the corresponding habits and virtues that could take us closer to those dreams.

It’s valuable to begin married life with a set of simple but intentional commitments to ensure that amid difficulties and busyness, couples can be guided by rhythms and routines that make time and space for the relationships that matter most.

Lapp is a research fellow at the Institute for Family Studies.

PREVIOUS: Your engagement: Go for grace, not perfection

NEXT: You’re engaged to be married — now it’s time to prepare