Your engagement: Go for grace, not perfection 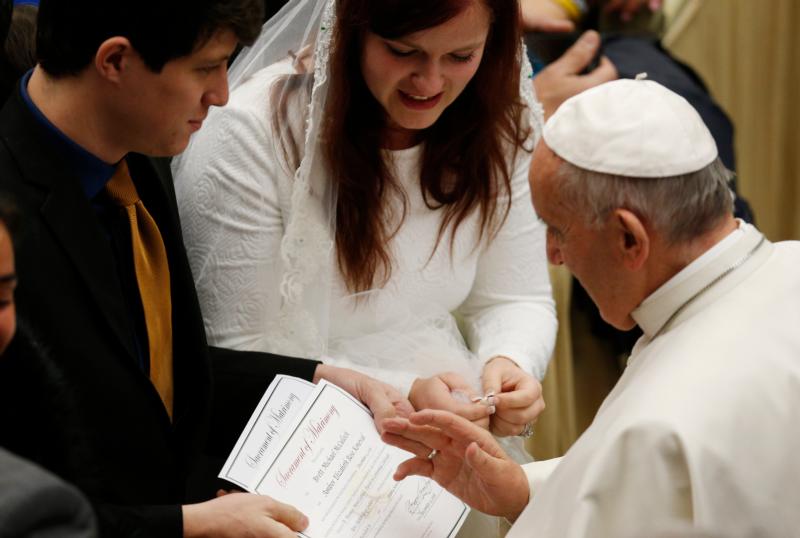 Pope Francis blesses the marriage certificate of a U.S. couple during his general audience in Paul VI hall at the Vatican Dec. 14, 2016. For Catholic couples, the engagement period is about much more than myriad details of planning a wedding. Beyond the guest list, dress and caterer, there is faith that abides and hopefully grows long after the flowers have dried and the photos are tucked away in albums. (CNS photo/Paul Haring)

For Catholic couples, the engagement period is about much more than the myriad details of planning a wedding. Beyond the guest list, dress and caterer, there is faith that abides and hopefully grows long after the flowers have dried and the photos are tucked away in albums.

But focusing on spiritual preparation during engagement can be difficult. The logistics leading up to the wedding day can seem all-consuming, and pressures and preconceived notions that today’s society promotes are many. But Catholic couples who persevere say they are happy they shut out distractions and stayed a more spiritual course.

Chelsy and Ben Gomez from northern Virginia have been married for a year. From the start of their year-and-two-weeks engagement, they focused on faith and were determined not to be discouraged by the inevitable bumps on the road to their wedding.

“With social media,” said Chelsy Gomez, “it seems like everyone else’s engagement or wedding is going perfectly. But trying to strive for that creates unrealistic expectations.”

Ben said, “Leading up to getting married, the most important thing to focus on is the sacrament. All the other ups and downs, everything is a gift and a blessing.”

“Frequent confession was really helpful,” said Chelsy. “And even when we were struggling to find daily prayer time or time for silent adoration, Sunday Mass together was a real respite.”

Justin and Annemarie Watson were 21 years old when they married in 2015, and they now have an 18-month-old son. Their engagement was short — eight months — and it was a challenge to plan for 300 wedding guests.

“It was hard not to get swept up in wedding planning,” said Annemarie. “But the engagement period is preparation for a lifetime. The faith that we built then helps us now to get through struggles, sleep exhaustion after you have a baby or small money problems.”

Prayer and other practices helped shape their faith life.

“The rosary is fabulous,” said Justin, “And if you make the sacraments a habit while you’re engaged and keep going through marriage, the graces are just spectacular.”

Time spent with family, clergy and other people of faith as well as an in-depth marriage preparation program (catholicmarriageprep.com) reinforced effective, faith-centered interpersonal coping skills, including a healthy attitude toward sex, and helped them get to know one another well.

“The foundation of our dating lifestyle was church events,” said Justin. “We were always finding new things to do, things to talk about.”

It was good preparation for realistic married life, Annemarie said. “Abstinence helps develop self-control, which is important during a marriage (for example, in natural family planning or when one spouse is ill).”

In Austin, Texas, Christina, a theology teacher and Catholic blogger (theevangelista.com), and Kristian Jaloway, a former priest who was laicized in 2016, were 33- and 41-years-old, respectively, when they married in December 2016.

With a strong Catholic background, “the spiritual element never felt like it got lost to me,” said Christina.

But the couple discovered differences in their approaches to religious practice.

“Christina’s background is much more charismatic,” said Kristian. “It was new to me.”

Viewing the differences as opportunities helped them build a solid foundation for their own family’s spiritual expression.

“Kristian really stepped up to the plate,” said Christina, “During the engagement, we started a prayer routine that we still do.”

The Jaloways also supplemented their diocese’s required marriage prep with additional reading and prayer and saw a Catholic marriage counselor prior to the wedding.

“You’re about to run a marathon that’s going to last your whole life,” Kristian said. “The more you prepare, the better you’re going to do.”

Chelsy said, “God’s grace in the sacrament is the only thing that can be perfect. But when things go wrong, those challenges are truly gifts.”

“And if they don’t seem like gifts,” says Ben, with a laugh, “think of it as training for married life!”

PREVIOUS: Engaged couples: Pray together with the Bible

NEXT: An unusual piece of advice: Talk about routines and rituals