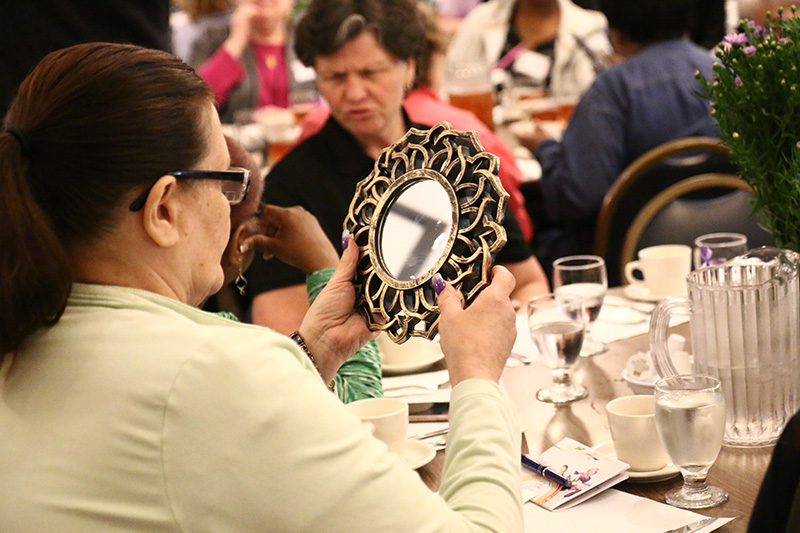 Participants reflected on spirituality and self-image at the fifth annual Women in Transition retreat held May 14-15 at Malvern Retreat House. The retreat offered pastoral care to clients of Catholic Social Services’ housing and community-based assistance programs. (Photo by Sarah Webb)

The sounds of Motown echoed throughout Malvern Retreat House at a two-day retreat for women organized by archdiocesan Catholic Social Services (CSS).

On May 14 and 15, more than 110 beneficiaries of CSS’s Housing and Homeless Services division sang, prayed and listened to spiritual conferences designed to renew their relationship with God and with themselves.

“God is a professional photographer,” said Blessed Sacrament Sister Lynn Marie Ralph, who led a session titled “The Woman God Sees in You.”

During her presentation, Sister Lynn asked the women to pass around a handheld mirror and look at their reflections while listening to “Isn’t She Lovely” by Stevie Wonder.

“God made you in his image and likeness,” said Sister Lynn. “The woman God sees is beautiful and courageous.”

Now in its fifth year, the retreat is fully funded by Malvern Retreat House, which partners with CSS to offer the event. Transportation, meals and accommodations are completely covered through donations to the Malvern Cares program, enabling the women — who face challenges from homelessness, addiction and mental illness — to receive intensive pastoral care.

“You can see what’s transpiring here, the healing and the sense of hope,” said Amy Stoner, director of CSS’s community-based services and homeless divisions. “To be able to have a personal relationship with Jesus Christ is so important in their journey. We can give them all the food in the world and all the housing and all the social services, but this is what really helps them with their success.” 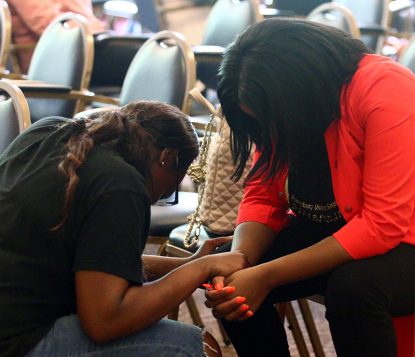 Attendees pray during the fifth annual Women in Transition retreat in Malvern. The May 14 and 15 sessions provided pastoral care to clients of Catholic Social Services’ homeless and community-based outreaches. (Photo by Sarah Webb)

The participants named their group in honor of Dorothy Day, an American journalist and Catholic social activist who has been designated a Servant of God by the Catholic Church. As a co-founder of the Catholic Worker Movement, Day promoted social justice, nonviolence and practical assistance to the marginalized.

“She really resonates with the life of women here — her struggles, her conversion — and she was an advocate for the poor and the homeless,” Stoner said. “She was a bit of a rebel, but so are all of us here at this retreat.”

Attendees enjoyed moments of quiet prayer throughout the retreat center’s spacious grounds in Malvern, Chester County. Many women accompanied Father Christopher Walsh as he led a walking meditation through the outdoor Stations of the Cross.

“The great challenge of our times is not to look at others as objects, but as people,” Father Walsh said at the tenth station, which recalls when Christ was stripped of his garments prior to crucifixion.

Father Walsh’s remarks, which related the events of Christ’s passion to the women’s own life experiences, evoked both tears and laughter.

“If you didn’t become a priest, would you have become a comedian?” asked one participant. 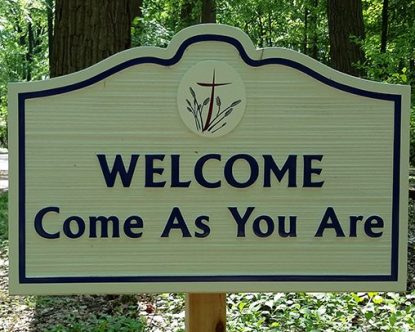 Participants in the fifth annual Women in Transition retreat were greeted by a sign of encouragement at the Malvern Retreat House on May 14 and 15. The sessions offered pastoral care to clients of Catholic Social Services’ homeless and community-based outreaches. (Photo by Gina Christian)

Later that evening, Father Walsh anointed the women’s eyes while praying for the restoration of their spiritual vision.

“I think it’s essential for Catholic Social Services and other religious-based ministries, even if they receive government funding, to be able to be faithful to who they are, which is allowing for spiritual healing, spiritual deliverance and the hope that comes from Jesus,” said Father Walsh, who serves as pastor of St. Raymond of Penafort in Philadelphia. “Once we provide for the basic needs of food and shelter, we need to share that God believes in these women.”

Michelle, who had “literally lost everything,” felt a renewed sense of faith during the retreat.

“My children had to go live with my mother; I was in a shelter and I had to start all over,” she said. “It was devastating, but this retreat is just a confirmation for me that God is a way-maker.”

Minta Brown challenged her fellow participants to deepen their understanding of God.

“My relationship with Jesus used to be more selfish — ‘help me, do this for me,’” said Brown, who shared her personal testimony at one of the sessions. “Now I think of him as a friend, as someone who cares for me and loves me. And that has changed everything.” 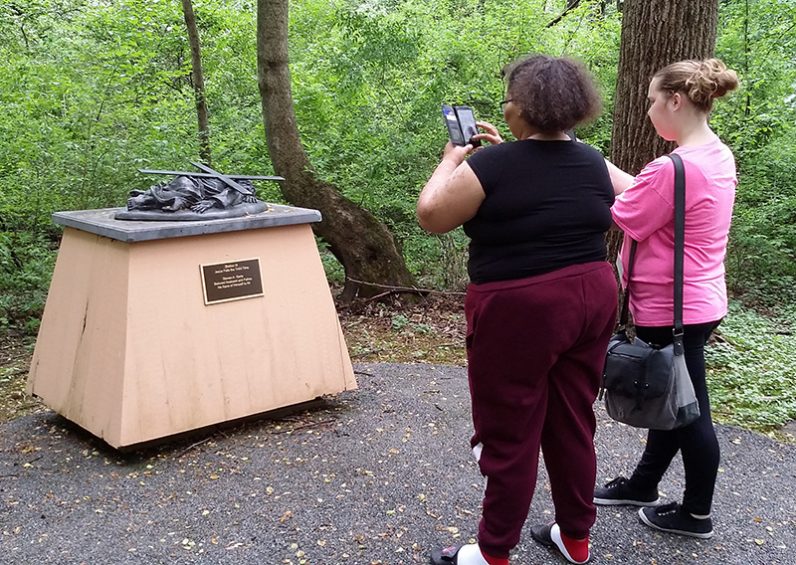 Participants in the fifth annual Women in Transition retreat reflected on the Stations of the Cross during a guided meditation on May 14 at Malvern Retreat House. (Photo by Gina Christian)

NEXT: Catholic War Vets mark day of remembrance in Havertown