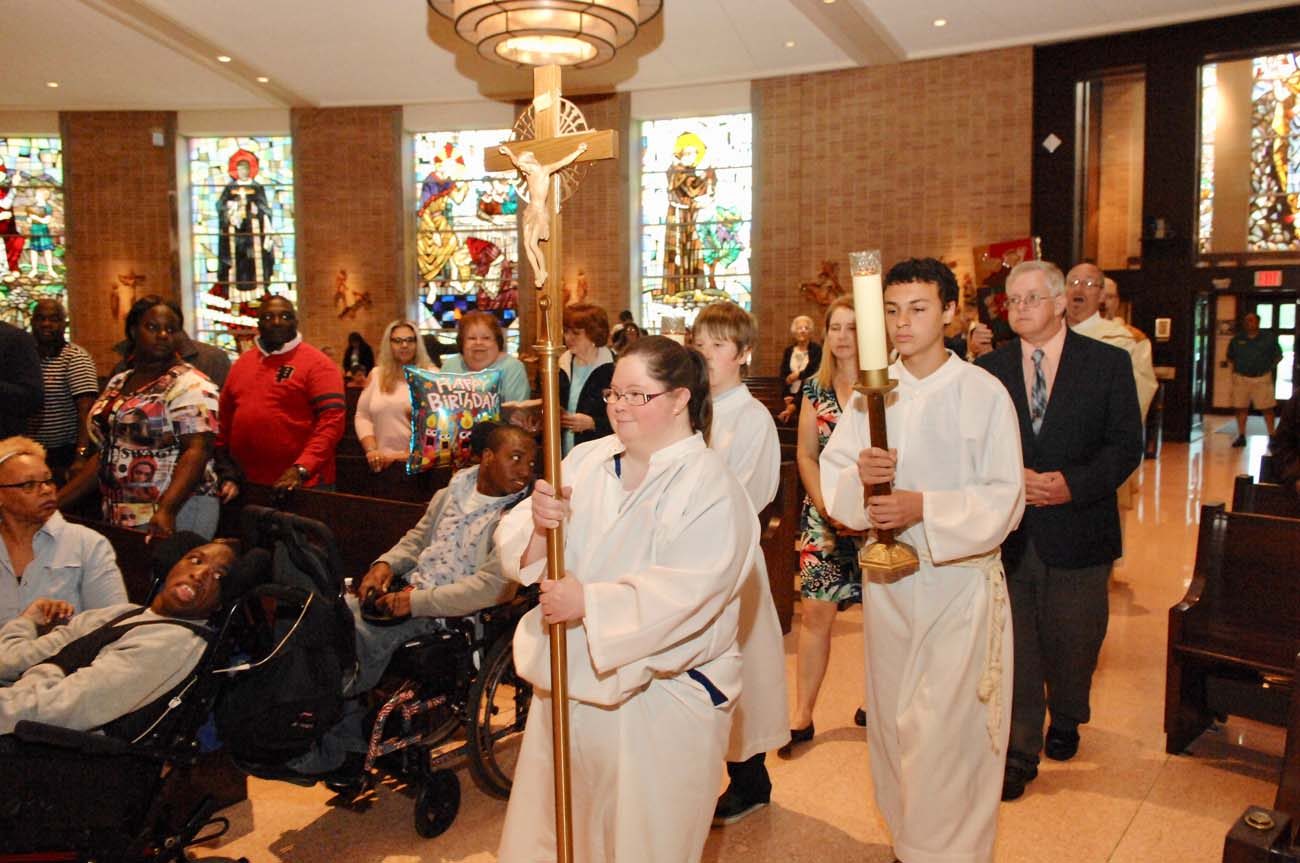 Jessica Clark carries the cross in the entrance procession for Mass on Sunday, May 6 at her parish, St. John Chrysostom in Wallingford, which hosts a monthly Mass with people with disabilities. (Photo by D'Mont Reese)

Jessica Clark didn’t set out to be a pioneer, a role model or a record setter.

At age 10, sitting up front with her parents at Mass, she just wanted to serve on the altar like other kids did.

“I love to volunteer wherever I am … church, school … anywhere I can do something,” said Jess, now 36. “I want to give back however I can.”

Jess just wanted to serve. And with the support of her family, pastor, ministry leaders and other servers, she did.

Today Jessica Clark is still a regular altar server at her home parish of St. John Chrysostom in Wallingford – an extraordinary, if not unique, ministry record that has won her parish’s gratitude and admiration. 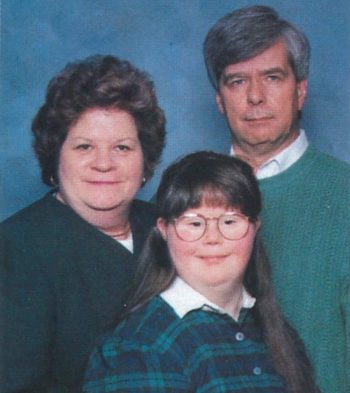 Jessica Clark in a 1997 photo with her mother Joann and late father James.

On Sunday, May 6, Father Edward J. Hallinan, St. John’s pastor, honored Jess and her widowed mother Joann in a surprise presentation during his homily. The homily focused on signs of how God’s love breaks into daily life, signs that “God’s love rules the world.”

(See scenes from our photo gallery of the Mass here.)

To Jess’s amazement, Father Hallinan called her from the altar and cited her ministry as one such sign. He also called up Joann, honoring her as the “loving, tender mom” behind her daughter’s faith and success. As the congregation applauded, he thanked the Clarks and presented gifts from the parish.

“Everyone has been very accepting and welcoming to her from the very beginning,” said Joann, a longtime special-education teacher and parishioner of St. John’s since it was founded in 1952.

The pastor “made sure that whatever she wanted to do, we would figure it out somehow,” she said.

Mastering the details of serving required only some extra time, support from fellow servers and practice.

The vision impairment was in some ways more challenging. At the time, the altar steps had no handrail, and the bright lights glared on the pink marble, making it difficult to see the end of each step. Jess learned to slide her foot to the edge until she got the feel for the layout.

Lighting the altar candles was also tricky at first, but a guiding hand and quiet cues from other servers helped her learn.

“Once she gets used to her surroundings, she’s OK,” Joann Clark said.

Finding the right alb for Jess in a closet full of white robes was a challenge until Mom thought to put a big red dot on the label of those that were the correct size for her daughter. Other servers taught her the tricks of tying the cincture, a rope-belt worn around the waistline of the alb.

Still, for years, Jess limited her roles to candle- and cross-bearer. She was nervous about carrying sacred vessels and serving the Mass, her mother said.

One January Sunday, however, no-shows by every other server meant a “battlefield promotion” to serving the entire Mass solo. Father James R. Bajorek, then the pastor, assured Jess that they could work it out. And, with his well-known gentle guidance throughout, they did.

Since then, Jessica has served all Masses – assisting bishops, serving at Triduum liturgies, jumping in at every opportunity. As the parish’s altar server ranks have shrunk over the years, she is needed more than ever. And her years of expertise have given her an eye for details that younger servers can miss.

Not unusual to find disabled people serving the church

Neither Jessica’s challenges nor her age have ever set her apart from other servers, said John Spinelli, who with his wife Marie have overseen St. John’s altar server ministry for more than 20 years. “Jess has been a great blessing to us at SJC and a great role model for all SJC individuals with disabilities,” said Spinelli.

And while her length of service has been unusual, her role has not, said Sister Kathleen Schipani, I.H.M., director of the archdiocesan Office for Persons with Disabilities and the Deaf Apostolate.

“Individuals with disabilities,” she added, “are agents of evangelization, drawing others into the heart of Christ’s boundless love.”

Large strides made, but ‘a lot of work to be done’

With one in five Americans – more than 55 million people – having a disability, ministry by individuals with disabilities should not be unusual.

Eighty-four percent of people with disabilities say their faith is important to them, and nearly half of those with severe disabilities attend worship at least monthly, according to the Collaborative on Faith & Disabilities, a multi-university initiative focusing on disability, spirituality and faith communities. 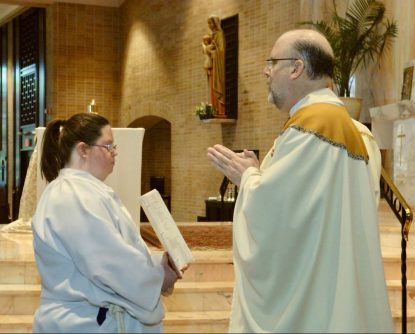 Jessica Clark holds the book as Father Edward Hallinan, pastor of St. John Chrysostom Parish in Wallingford, prays the opening prayer at Mass on Sunday, May 6. (Photo by D’Mont Reese)

A 1978 Pastoral Statement by the U.S. Catholic Bishops called for full participation of Catholics with disabilities in the celebrations and obligations of their faith. In 1985, the National Catholic Office for Persons with Disabilities (now the National Catholic Partnership on Disability) issued a two-volume resource manual for promoting inclusion at the parish and diocesan levels.

In 1998 the U.S. Catholic Bishops’ statement, “Welcome and Justice for Persons with Disabilities,” reminded Catholics that “there can be no separate church for persons with disabilities” and that they are “a single flock under the care of a single shepherd.” 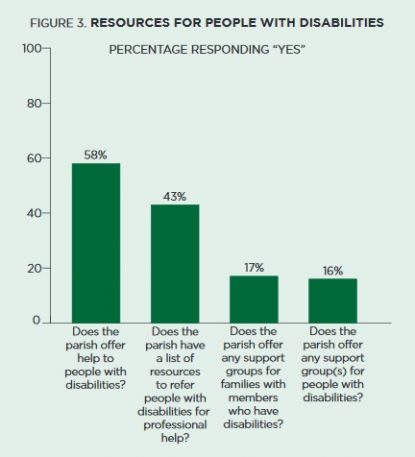 And yet, CARA concluded: “While parishes in the United States have made large strides to include people with disabilities, especially physical disabilities, there is also a lot of work to be done.”

Many parents would agree. Nearly one-third say they have changed their place of worship because their children with disabilities were not included or welcome, the Collaborative on Faith & Disabilities reports.

‘It’s my calling from God’

Pope Francis also reinforced the message in an address Oct. 21, 2017, saying that the church community “must not lack the words and, above all, the gestures for encountering and welcoming people with disabilities. The Sunday liturgy, especially, must be able to include them, so that the encounter with the Risen Lord and with the community itself may be a source of hope and courage in the difficult journey of life.”

“It’s really not that hard,” said Joann, who gets exasperated when people question her about Jess right in front of her. They assume Jess – who has addressed international conferences and is proficient in American Sign Language – can’t understand.

For Jess, neither the challenges of her ministry nor the attention over it faze her. She just loves to serve, and decades of doing so have not dimmed her joy.

Altar serving allows her to give back to her church, she said after Sunday’s ceremony.

“And,” she adds, “I think it’s probably my calling from God.”

NEXT: Born of mergers, 3 parishes mark 25 years in times of change