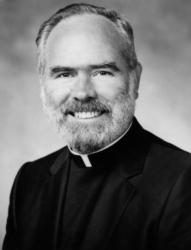 WAUWATOSA, Wis. (CNS) — Jesuit Father Michael Morrison, the longest serving president of Creighton University in Omaha, Nebraska, and a major force in its growth, died May 24 in hospice at St. Camillus in Wauwatosa, a retirement and health care community. He was 81.

A wake and funeral were to be held the evening of May 29 at St. Camillus’ Madonna Della Strada Chapel, with burial May 30 at Mount Olivet Cemetery in Milwaukee.

A native of Green Bay, Wisconsin, Father Morrison was president of Creighton from 1981 to 2000, and he remained a history professor throughout his tenure.

Known for his daily walks and sitting on the wall by St. John’s Church on campus, ready to talk with anyone passing by, he also oversaw construction of 10 new buildings, including the V.J. and Angela Skutt Student Center, the Beirne Research Tower, the Lied Education Center for the Arts and the Cardiac Center.

Father Morrison grew the school’s endowment from $16 million in 1984 to more than $200 million as part of a multiyear Creighton 2000 campaign. That fundraising effort also helped generate more than $25 million in new scholarship funds and created 13 new endowed academic chairs between 1992 and 1998.

The school’s soccer stadium, built in 2004, is named after him.

Father Morrison once said he saw Creighton as a “small, yet complex, Jesuit, Catholic university.” He thought Creighton offered something valuable and distinctive, saying “no other college or university is like us.”

He joined the Jesuits in 1955 and was ordained in 1968. After earning five degrees, including a doctorate in philosophy from St. Louis University and another in history from the University of Wisconsin-Madison, he began his university teaching career at Marquette University in Milwaukee in 1972, where he also served as vice president for academic affairs before coming to Creighton in 1977.