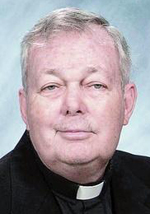 Born in Philadelphia, the son of the late John J. Nevins and the late Florence (Mellon) Nevins, he attended St. Martin of Tours School and St. Joseph’s Preparatory School before entering St. Charles Borromeo Seminary. He was ordained May 11, 1957 at Immaculate Conception Church, Philadelphia, by Archbishop John F. O’Hara.

Father Nevins’ first assignment was as parochial vicar at Mary, Queen of Peace Parish, Pottsville. He then served on the faculty of Cardinal Dougherty High School and Gwynedd-Mercy University.

In 1996 Father Nevins was appointed pastor of St. Margaret Mary Parish and was named pastor emeritus in 2006.

“He was absolutely the best priest I have ever known in my life,” declared Grace Walsh, who was his secretary at St. Margaret Mary. “He had a way of reaching without preaching. He loved people, he loved Jesus. He would go to a foreign country without packing much but his suitcase would be empty when he came home because he gave the clothes to beggars at the airport.

“He believed strongly in giving. We were a small parish but we had 90 volunteers. We never had a social service committee before he started one. We knocked ourselves out for him.”

As a secondary assignment Father Nevins also served as a youth retreat master for retreats at the former Camp Neumann, recalls Bishop Robert P. Maginnis, who is a past director of the former archdiocesan Office of Youth and Young Adults.

“He taught with me at Cardinal Dougherty and started with us in the youth program,” Bishop Maginnis said. “I think one year we had 15,000 kids bused up to Camp Neumann for retreats.

“He was bright, capable, dedicated, creative and personable. He was a loyal friend you could always count on.”

Msgr. Francis Schmidt, who was a St. Joseph’s Prep and St. Charles Seminary classmate of Father Nevins and also a director of the Office for Youth and Young Adults, remembers him as “a very optimistic and happy priest, a great athlete, well-suited for working with youth and getting teams together.”

Father Nevins’ interest in youth formation was such that he obtained a doctoral degree, Msgr. Schmidt recalls.

“He also had a passion for social justice and was at his best promoting that,” Msgr. Schmidt said.

There will be a viewing for Father Nevins at St. Albert the Great Church, Huntingdon Valley, on Thursday, June 28 at 9 a.m. followed by his 11 a.m. funeral Mass with Auxiliary Bishop Edward M. Deliman as the principal celebrant. Concelebrants will include Bishop Maginnis, Msgr. Schmidt, Msgr. James McDonough and Msgr. Ignatius Murray. The homilist will be Father Patrick Sieber, O.F.M.

Father Nevins is survived by his nephews Matthew Rinehart and Michael Rinehart, his niece Nancy Morlock and grandnieces and grandnephews.