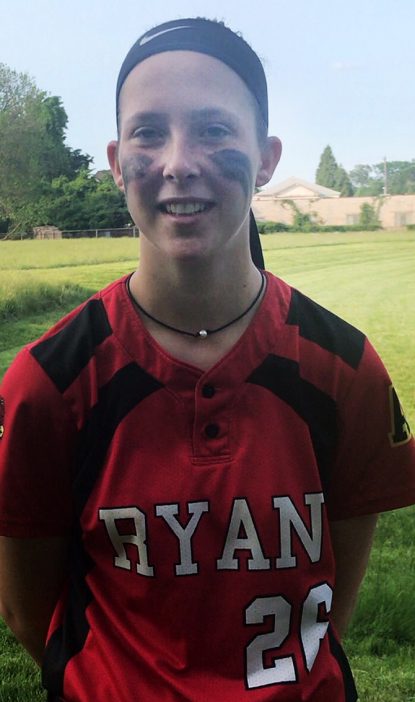 One for the ages.

The All-Catholic freshman played like a seasoned vet. The only Viking to reach base – Gianna Lancelotti on a bloop single with two outs in the fourth – was erased when the Wood junior was thrown out at second trying for a double.

“When I know I have a hitter that is hitting a lot and is fouling off a lot of balls, I know I gotta really work on my spins,” said Bell. “I know I’m not going to be able to just throw it past them. I really have to pitch the ball and get it where it needs to be.”

“Dana is not a normal freshman,” said Kidwell. “She is just very focused, very talented, and a very hard worker. She took a lot of pressure off our team early this year and allowed everyone to get comfortable in their roles.

“Three of our four infielders are playing new positions. We have three seniors in the most important positions – catcher, shortstop and center field. They have had a great year defensively and at the plate.”

“It’s very easy,” said Burns. “Basically I don’t really do anything. Once in a while I have to frame the ball. It’s not like anything outrageous. It’s like she doesn’t even need me back there. It’s nice.”

The regular-season champion Ragdolls jumped to a 2-0 lead in the first inning. Senior Kate Ostaszewski led off with a single, moved to second on a ground out, and scored on junior Megan Kidd’s RBI single. An unearned run made it 2-0, and a similar result in the third finished the scoring.

Ostaszewski and Kidd were the only Ragdolls with two hits against Wood pitcher Marisa Browne, who only surrendered seven hits, one walk and one earned run while striking out six.

But the game belonged to Bell. In two playoff games, she has pitched 14 innings and allowed a paltry three hits, one walk and no earned runs. She struck out 11 Vikings, a minimum of one in each inning.

“It’s an exciting time for all of us,” said Bell. “I think we are in a good place. We’re confident in our ability to keep going. We beat a very good team today and have to beat another good team in the championship.”