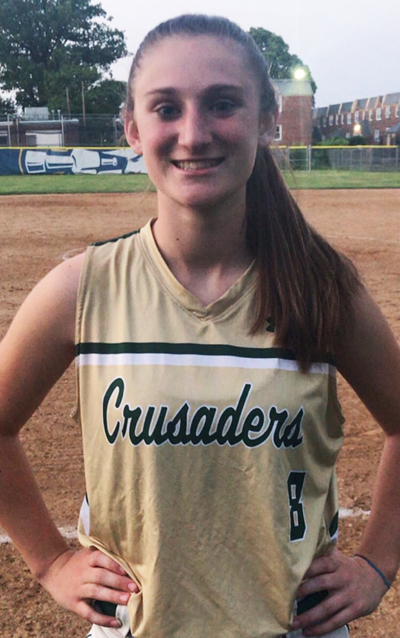 Senior Lansdale Catholic shortstop Delaney Smith caught everything hit near her in the Catholic semifinal against Bonner-Prendergast May 23. The Crusaders used the gloves and the bats, especially, in their 15-4 win to advance to the championship game against Archbishop Ryan.

Delaney Smith had just finished a post-game interview. Someone from the Lansdale Catholic bench got her attention, then tossed her a game ball.

The senior shortstop – fittingly – caught it. Then she laughed and briefly closed her eyes. If she was in a trance, she had good reason.

In an epic offensive performance Wednesday at La Salle University, Lansdale Catholic defeated Bonner-Prendergast, 15-4, in a Catholic League semifinal. The three-seed Crusaders, who will meet top-seed Archbishop Ryan 3 p.m. Friday, May 25 at the same location, were unstoppable against the two-seed, defending champion Pandas.

“This is hard to explain,” said Smith. “It’s just pretty amazing. Everybody played great. Everyone.”

“It was like a contagious thing,” said Smith. “We came out in the first inning kind of tense. But after we got a little more confidence in the field we were more relaxed.”

On the hill, sophomore pitcher Megan Burns was in control. After allowing two runs in the first inning, Burns settled down. By the time she surrendered two seventh-inning runs, LC was already in front by 15-2.

Burns’ defense was spotty at times, but she picked up her teammates by making great pitches in key moments. Burns defended any criticism of LC’s four errors.

“We also made a lot of great plays,” said Burns. “It was definitely a team win. Every single player did something good. It was amazing.”

Perhaps the signature defensive gem was performed by Smith to lead off the home seventh. Junior Meghan McNulty hit a hard grounder in the hole. Smith reached far to her right, backhanded, and fired a laser to freshman Kaitlyn Leshak at first base for the out.

Right behind Smith’s highlight was sophomore Mary Picozzi. With two on and two out in the sixth, freshman Madison Thompson sent a deep drive to left field. Picozzi tracked the fly ball, reached up against the fence, and probably saved a three-run homer. Picozzi added fuel to the highlight reel when BP’s runner at second was doubled off to end the inning.

“I honestly felt that we would win, but never a blowout like this,” said Smith. “It was like a contagious thing. We came out in the first inning kind of tense. But after we got a little more confidence in the field we were more relaxed.”

Crim, the leadoff hitter whose infectious personality was cited by several of the underclassman-laden Crusader roster as a key to LC’s season-long success, could barely hold back her joy when asked about her team’s offensive explosion.

“It was a lot of fun, it was awesome,” said Crim. “That was pretty unbelievable. She’s (Sullivan) a really good pitcher. All pitchers want to get ahead, so you see a first-pitch fastball, you gotta swing at it. It’s gonna be right down the plate. You gotta go for it. When someone hits, it’s a pattern. Everyone hits.”

Smith insisted she wasn’t too surprised that her team advanced to the championship.

“I honestly felt that we would win, said Smith.

“But never a blowout like this,” she said. “It was like a contagious thing. We came out in the first inning kind of tense. But after we got a little more confidence in the field we were more relaxed.”

NEXT: Ideal matchup shapes up as a reality for Catholic baseball final