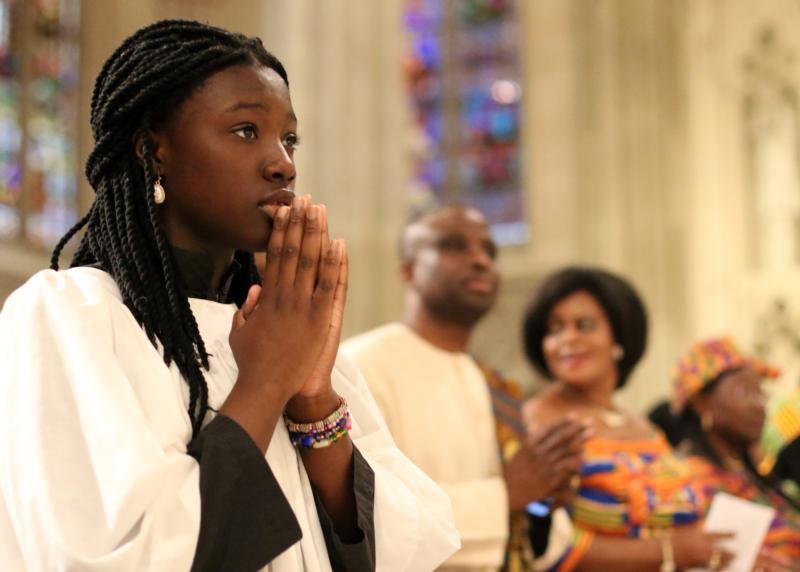 An altar server processes toward the sanctuary at the beginning of the annual Black History Month Mass at St. Patrick’s Cathedral in New York City Feb. 4. (CNS photo/Gregory A. Shemitz)

From the first Pentecost until now, the Holy Spirit has guided the body of Christ in its mission to evangelize, blessing it with diverse charisms geared toward bringing all creation into full communion with the triune God.

All God’s people share equally in this legacy; cultural and ethnic groups over time have brought their particular giftedness to the Christian mandate to make disciples of all nations, teaching as Christ did.

Quite invisible in the historical and theological record of the Catholic Church however, are disciples of African descent. The lack of identifiable African or black presence in the standard church history reflects a bias that diminishes the contributions of some while exaggerating the importance of others.

Systemic blindness to the contributions of black Christians deprives the church of its authentic history and discounts black agency. For the Holy Spirit has richly endowed black people for service to the body of Christ.

African scholars suggest that, notwithstanding the long history, cultural complexity and size of the continent, “God is” represents a foundational and core belief across most African societies. Despite the interferences of colonialism and modern-day influences, reliance on a pre-eminent God remains deeply rooted in the cultures of black people on the continent and throughout the African diaspora.

Traditional African spirituality sees community as God’s great creation plan that upholds the sanctity of life; family and kinship; the interdependence of God, the individual and the community; and the role of the ancestors — to name but a few guiding principles that persist in a variety of black cultural institutions and form the basis of a sturdy moral compass by which human behavior is to be critiqued.

In the 1984 “What We have Seen and Heard: A Pastoral Letter on Evangelization from the Black Bishops of the United States,” the movement of the Holy Spirit in African-Americans is likewise characterized as communitarian, contemplative, joyful and holistic, encouraging God’s beloved in their ongoing struggle for liberation and conversion to holiness.

There is a reason that the spiritual gifts of God’s black people do not mirror those of other cultural groups. The particularity is attributable to African heritage — at once resplendent, sorrowful, exquisite and horrible, like that of any other human group.

In even this briefest discussion of black spirituality, one discerns that a unique genius and godliness has heartened black humanity through centuries of brutal injustices — from the horrific Atlantic slave trade to the violent situations featured in today’s headlines that demand the existence of Black Lives Matter movements.

In ecclesial settings where unity is valued over uniformity, black Catholic spirituality has been fruitful in areas of evangelization, pastoral ministry, social justice, Christian initiation as well as community-building initiatives that respond to the particular needs of the black faithful and others seeking God.

Given the hidden, yet provocative, history of black Catholics in the United States, it seems that it will take a supernatural intervention of the Holy Spirit to bring black culture into earnest dialogue with the Catholic faith such that the church can actually incorporate black spirituality and other gifts in the conduct of its evangelizing mission while bringing to bear the moral authority of the Gospels to challenge and uplift the lives of black members of the body of Christ.

Kathleen Dorsey Bellow earned the doctor of ministry degree in 2005 from Catholic Theological Union in Chicago. She is adjunct professor at Xavier University of Louisiana and serves the church in the areas of liturgy, culture and faith, and pastoral ministry.

NEXT: Donating your body to science can build culture of life