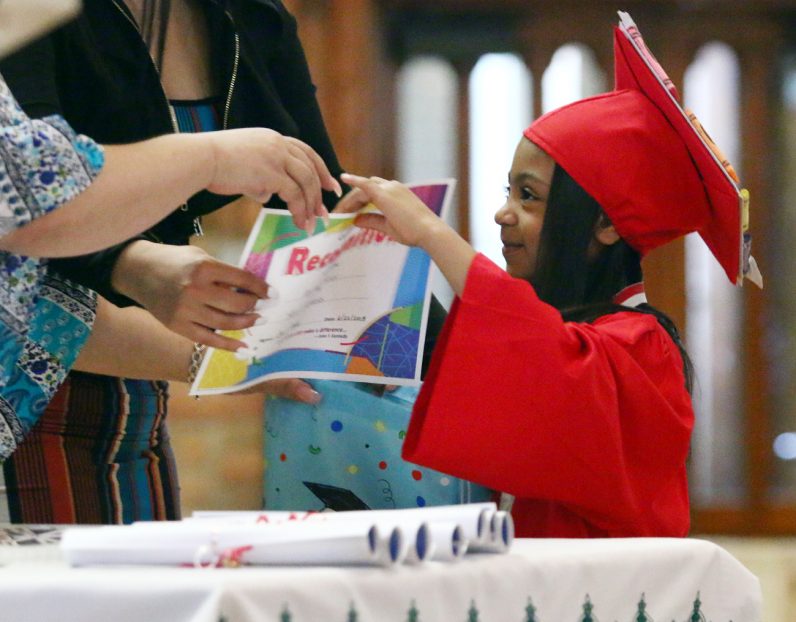 Located in the Philadelphia’s Hunting Park section, the academy is one of the many programs offered through Casa del Carmen, a CSS family service center that has assisted the Latino population of North Philadelphia since 1954.

Last year Casa, which is supported by the annual Catholic Charities Appeal, provided a wide array of resources to approximately 13,000 individuals, according to administrator Camille Crane.

And while the sight of 5-year-olds wearing graduation gowns had parents scrambling to take pictures, the ceremony that took place at Holy Innocents Church was about much more than mites in mortarboards.

“A lot of people undervalue preschool because they feel like it’s just a babysitting service,” said academy director Shari Gold. “But kindergarten is different now; it looks more like what second grade used to look like, with mathematics and more advanced reading skills. And if kids are not prepared, then they’re going to fall behind.”

Gold, a Chestnut Hill College graduate with 25 years of teaching experience, focuses on developing a learning environment that provides structure and safety. 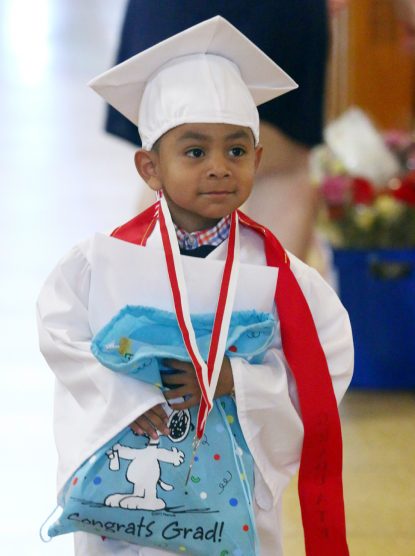 The preschool is open year-round from 7 a.m. until 6 p.m. every weekday, offering classes in science, math, reading and listening skills. Art activities, play periods and naps round out the day, which includes breakfast, lunch and a snack provided through archdiocesan Nutritional Development Services as part of the federal school meals program.

Like the rest of Casa’s staff, the academy’s teachers are bilingual, and lessons are taught in both English and Spanish.

With a waiting list of approximately 30 children, the academy has earned high marks with its funding and regulatory partners. The Pennsylvania Department of Education gave the school its highest rating in recognition of Casa’s responsive early education strategy and overall management.

The city-licensed academy receives funding for preschool tuition through the Philadelphia beverage tax, but not during the summer months. Catholic Charities funds help support the academy year-round.

View a photo gallery and watch a video of the Casa del Carmen Preschool Academy graduation.

“You’re leaving your most precious possession with us for several hours per day,” said Gold. “You have to feel comfortable with who’s watching your kid.”

Both Gold and Crane note that Casa del Carmen’s long history and deep roots in the community make it a trusted resource.

“Families are very, very comfortable here,” said Crane. “In fact, the majority of our employees are from this community.”

Many staff have worked at Casa for a number of years, including teacher Rosabella Gittens.

“It’s a different type of learning now,” said Gittens, who has just completed her 19th year at the school. “Technology has a big part in it. But when students have a meltdown, you still just give them a lot of love and comfort.”

“I feel like he’s more prepared now to go to kindergarten,” said Ortega, who is hoping to enroll Noah in Holy Innocents Parish School. “Before, he was behind. After Casa, he knows his colors and his numbers.”

Ortega also noted that her son’s socialization skills blossomed during his time at the academy.
“He can actually hold a conversation now,” she said. “Before he was too shy. Now he’s more outgoing.”

In fact, studies have shown that early childhood education significantly improves social and cultural skills, especially among dual-language populations — a key objective for Gold and her team.

NEXT: Special kids enjoy a day of their own at St. Michael’s parish fair