Dominican Sisters-run home for dying patients to shut it doors 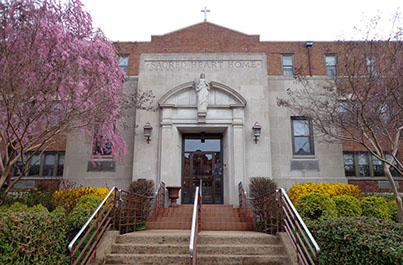 Sacred Heart Home for Incurable Cancer, located at 1315 Hunting Park Avenue in Philadelphia, has been run by the Dominican Sisters of St. Rose of Lima (Hawthorne) since 1930 but will suspend operations at the end of August.

An era will end in Philadelphia, hopefully temporarily, when Sacred Heart Free Home for Incurable Cancer suspends operations at the end of August.

The 25-bed ministry of the Dominican Sisters of St. Rose of Lima (Hawthorne) has been located at 1315 Hunting Park Avenue in North Philadelphia since 1930.

Sacred Heart is unique in that it relies entirely on donations and accepts no money from its residents or any government agency, not even Medicaid or Medicare. It exists entirely on free-will donations.

This is in keeping with the charism established by the congregation’s founder, Mother Rose Hawthorne Lathrop, a Catholic convert and widowed daughter of distinguished author Nathaniel Hawthorne.

She established her first small hospice for incurably ill cancer patients in New York City in 1896 and her congregation in 1900, and at that time adopted her name in religion, Mother Alphonsa. She died in 1926 and the cause for her canonization is in its early stages.

In addition to Sacred Heart in Philadelphia the congregation has a larger facility in Rosary Hill, Hawthorne, N.Y., and another in Atlanta, Georgia.

“We have 10 sisters here,” said Sister Mary de Paul, O.P., the director at Sacred Heart Home and herself a Philadelphia native.

Most of the sisters are trained nurses, but one of the challenges for Sacred Heart is that with a reduced number of sisters, there is an increased reliance on lay staff, which because of higher payroll increases costs, Sister Mary de Paul said.

Homes conducted by the Rose Hawthorne Dominicans are never large and this is in keeping with the will of their foundress. The smaller size gives a more personal, less institutional feel.

Because the focus is on palliative care the residents who come do not receive hospital treatments to eradicate their cancer, just such medications needed to keep them comfortable. All services including doctor visits are done in-house.

With that said, residents tend to live longer than in past years, probably because of medical advances even in palliative care.

As for why Sacred Heart Home is suspending operations, a release issued from the congregation explains one factor contributing to the decision was the sisters’ concern “to preserve and foster their charism in its entirety. Consolidating the number of homes operated by the sisters will enable them to maintain the personal bedside nursing care which is an essential element of their apostolic charism.

“Another factor in this decision,” said the release, “is the fact that Sacred Heart Home will need to be rebuilt in the next few years. This suspension will afford us the time to not only strengthen the staff of sisters, but allow us to discern the best way of rebuilding Sacred Heart Home.”

While their numbers are not high, the Rose Hawthorne Dominicans are not dying. “We have two postulants right now who will take vows in September and we have three girls entering in October,” Sister Mary de Paul said.

If these numbers keep up, “we are hoping we can return in a few years,” she added. “We have others showing interest and if that keeps up we could be coming back within five years.”

To learn more about the Dominican Sisters of Hawthorne visit the website Hawthorne-Dominicans.org.

NEXT: Former orphans reflect on Catholic care some 50 years later