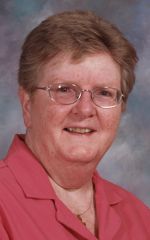 Sister Kathleen McMullin, O.S.F. (formerly Sister Kathleen Theresa), 71, died May 27 in Assisi House, Aston, at age 71. She had been a professed member of the Sisters of St. Francis of Philadelphia for 50 years and recently celebrated her golden jubilee.

Sister Kathleen was born in Philadelphia where she was a member of St. Martin of Tours Parish and a graduate of Little Flower High School. She entered the congregation in 1965 and professed her first vows in 1968. She earned a B.A. in English from Neumann University and received a Professional Certificate in Spiritual Gerontology from the Johnson Institute.

Her early years in ministry were spent in education but she later ministered primarily in parish ministry and social services.

In the 11 years prior to her death, Sister Kathleen ministered in the Diocese of Allentown. Initially she served as a foster parent to several young children. At the time of her death she was serving as assistant director of Clare of Assisi House, a facility in Reading that offers a transitional home for women leaving prison. This was an endeavor on which she had worked for a number of years before the facility actually became a reality.

Sister Kathleen also ministered for 12 years in the Diocese of Lexington, Kentucky, where she served as a pastoral associate and spiritual director for Our Lady of the Mountains Parish in Stanton, Kentucky.

She began her 13 years of ministry in the Diocese of Trenton as a teacher at Blessed Sacrament School. She later served as part of the provincial staff at the congregation’s former St. Anthony Province which was based in Trenton. She served first as vocation director and later as a provincial councilor.

The funeral Mass was celebrated May 31 at Assisi House. The burial was June 4 in Our Lady of Angels Cemetery in Aston.

Sister Kathleen is survived by her sister, Mary Rutecki, three brothers, Frank, Charles and Joe McMullin, nieces, nephews, and by her Franciscan family. Donations in her name can be made to the Sisters of St. Francis Foundation, 609 S. Convent Road, Aston, PA 19014.

NEXT: Holy Child Sister who was first American Province leader dies at 87