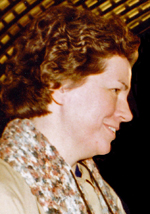 Sister Elizabeth Fitzmaurice, S.H.C.J., who was a Sister of the Holy Child Jesus for 65 years, died of cardiac arrest on May 25 in Bala Cynwyd. She was 87.

Sister Elizabeth made history in the Society of the Holy Child Jesus. She was appointed the first province leader of the newly formed American Province in 1976. Her intelligence, leadership and administrative skills made her a natural fit for this time of change and challenge in the society and during the Catholic Church’s period of renewal after Vatican II. She served a total of 16 years in society leadership positions.

Sister Elizabeth was born in Kenosha, WI, but at the age of 16, she moved to Waukegan, Ill., and attended Holy Child High School in 1949. After graduation, she entered the Society of the Holy Child Jesus and made her final vows in 1957. She became known by her religious name Mother Thomas Mary.

Beginning in 1952, Sister Elizabeth’s teaching ministry at the elementary and secondary school levels spanned nearly two decades. In the Philadelphia Archdiocese, she led or taught at St. Edward School in Philadelphia and Holy Child Academy in Sharon Hill.

Sister Elizabeth was well loved and respected by her students, and many kept in contact with her throughout their lives.

In 1976 the society underwent a major organizational change and three separate Provinces within the United States — New York, Rosemont, and Western (California and Oregon) — were merged into one and named the American Province, with Sister Elizabeth appointed its first leader. She served two consecutive terms until 1983. Her groundbreaking work in organizing the province remains in effect today.

She joins her parents Thomas and Madeline (Malone) and siblings James and Jane (Mantel) in eternal life.

The funeral Mass was celebrated May 31 at Holy Child Chapel in Rosemont.

Memorial donations may be sent to Society of the Holy Child Jesus – American Province, 1341 Montgomery Avenue, Rosemont, PA 19010, or online at www.shcj.org/american/donate.