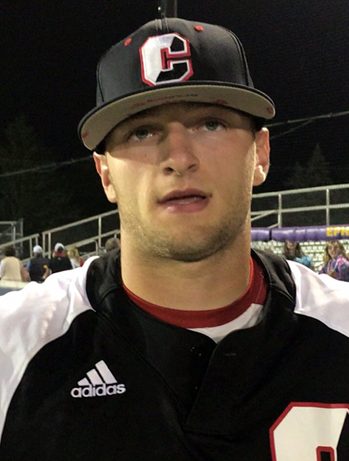 With junior Tyler Kehoe at first base after a leadoff single, sophomore Max Hitman smoked a fastball toward right field, and the first inning of Monday night, June 11’s PIAA Class 5A baseball state semifinal at Ephrata High School looked like a great start for Archbishop Carroll.

But Hitman’s line drive nailed an unsuspecting Kehoe while running toward second, resulting in a dead ball and Kehoe being called out. Carroll would eventually put runners on second and third but be unable to score.

It was that kind of an evening for the Patriots. Unable to solve outstanding pitching by two Lower Dauphin pitchers, Carroll’s season came to an end with a 3-2 loss.

“I just told them it was a great ride,” said Carroll coach Mike Costanzo. “Guys coming back (can) kind of feed off it and use it as motivation. Guys not coming back, I told them that I appreciate everything they brought to this program. They set the precedent high.”

A scoreless duel was severed in the bottom of the fourth when Carroll junior second baseman Sean Lawley doubled home sophomore Trent Pierce, who had drawn a two-out walk and advanced to second on an errant pickoff throw. It was one of three Lower Dauphin errors; unfortunately, the Patriots’ defense was less than stellar as well, as they committed three errors of their own.

The third miscue proved costly when the District 3, third-seed Falcons (23-2) from Hummelstown engineered an unearned run as part of a two-run rally in the fifth inning to go ahead by 2-1. In the visiting sixth, Lower Dauphin increased its lead to 3-1, but the District 12 champ Patriots (20-6) moved to within 3-2 in the home sixth on the strength of a walk, hit batter, and throwing error.

In relief of senior starting pitcher Jake Kelchner, Kehoe fired two scoreless innings and struck out six, but the Patriots’ offense was unable to solve the LD pitching puzzle.

“We didn’t execute when we needed to and they executed when they needed to,” said Kehoe, who singled twice and scorched two other balls to no avail. “It was a close game and we fought to the end, but the bounces went their way and they executed and we didn’t.”

“The expectation next year is to come back and win the Catholic League and win the state championship,” said Kehoe. “Nothing less.

“It was a great season. We battled to the end. We came up short twice but I wouldn’t want to go to battle with any other group of guys. This is a special group and I’ll never forget these guys.”

Lawley, who notched two of Carroll’s five hits and was credited with the team’s only RBI, will miss the upperclassmen.

“We had a great senior class that helped out team a lot,” said Lawley, “but the juniors and sophomores we had are a pretty strong group. Feeling this will help us next year to never feel this again and try to come out and win the state championship.”