The legacy of ‘Humanae Vitae’ at 50 years 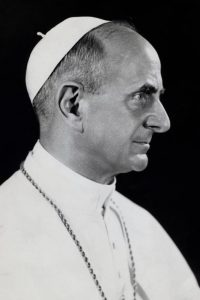 Perhaps the most surprising thing about the encyclical “Humanae Vitae” 50 years on, is how reports of its imminent death were continually exaggerated. Very few brave souls would have predicted in 1968 that the document would ever enjoy enthusiastic support from more than a few female Catholic intellectuals and the Catholic “woman in the pew,” even while it remains contested both in the church and in the world.

Rather, given the widespread acceptance of and hopes associated with contraception, most believed that the church would either alter this teaching or that it would be quietly ignored, and the furor would die down.

It also promised to improve marriages and free women to take advantage of the new opportunities outside the home that were opening up for them. Its manufacturer, G.D. Searle, delivered it to doctors with a paperweight of a naked, gold-painted, bare-breasted woman — Andromeda — with her head up, breaking free from her chains. On her back was the word “unfettered.”

Furthermore, during the 1960s and continuing to today, men and women were increasingly inclined to believe that human progress could be measured by the pace of new technology. So the church’s position in “Humanae Vitae” was characterized as a fear of progress and science, alongside distaste for sex and for women’s freedom.

But over time, as the sexual revolution played out and contraception failed to live up to its billing, fair observers began to note a positive or prophetic thing or two about “Humanae Vitae,” along with its surprisingly accurate read of human nature.

For one thing, “Humanae Vitae” took sex seriously, far more seriously than the contemporary world, for all its talk about sex. It called sex “noble and worthy.” It also spoke positively, even upliftingly, about the bond between men and women. It grasped the importance of this bond for their own happiness and for their coming to understand and model to the world what faithful, permanent, fruitful love could look like.

In other words, their love could provide the couple themselves and the world some understanding — a glimpse — of how God loves us and how we are to love one another. And to do so in a very Catholic way, involving the body as well as the mind and heart.

“Humanae Vitae” was increasingly labeled “prophetic.” Pope Paul VI understood, long before sophisticated social measures could (and did) prove him right, that the quality of marital and parental love has social consequences. These consequences would manifest themselves first in the basic cell of society, the family, and from there radiate out into the world.

Today we know and can measure what this pope already intuited: that robbing sex of its full meaning would lead to a great deal of sex without commitment, without even love. That children would suffer the loss of their parents’ stable marriages. And that women would become sexual instruments and find themselves all too often in what we now call #MeToo predicaments.

In addition to its other prophecies, “Humanae Vitae” correctly predicted that countries would give in to temptations to take “harsher measures” to promote contraception among people it did not wish to procreate.

This has occurred not only in China and India, but also in the U.S., albeit here with a friendly face: poorer women here are “incentivized” to use free contraception, especially if they will use the so-called long-acting varieties that require a doctor’s help to remove.

At the same time, Pope Paul VI anticipated that couples resorting to natural methods of family planning would achieve an important degree of tranquility and peace. Their marriages would be strengthened, and their sensitivity to one another’s hopes and feelings improved.

Pope Paul IV foresaw as well that contraception would provoke an increasing desire to achieve technological dominion over the human body. It would encourage us to forget that we did not design or make ourselves and that we are not each “master of the sources of life” but rather the “minister(s) of a design established by the Creator.”

Our bodies would become mere matter for our manipulation. This has reached perhaps its logical limit with contemporary demands for easy access to surgery to transform human bodies into the opposite sex.

It would be naive to predict that “Humanae Vitae” will achieve enthusiastic consensus in our lifetime. Too many “-isms” mitigate against this possibility: materialism, scientism and sexism, among others. Not to mention the valorization of sex as a self-focused, identity- and happiness-maximizing exercise.

But because “Humanae Vitae” got human nature right, wherever people are debating the ethics of human sexual relationships, they will have to grapple with “Humanae Vitae” and to give this bruised and battered document its due.

Alvare is professor of law at the Antonin Scalia Law School at George Mason University.

PREVIOUS: What does the church teach about ‘responsible parenthood’?

NEXT: Reflections on ‘Humanae Vitae’ at 50 years