Along the 2,000-mile border, few things are black and white 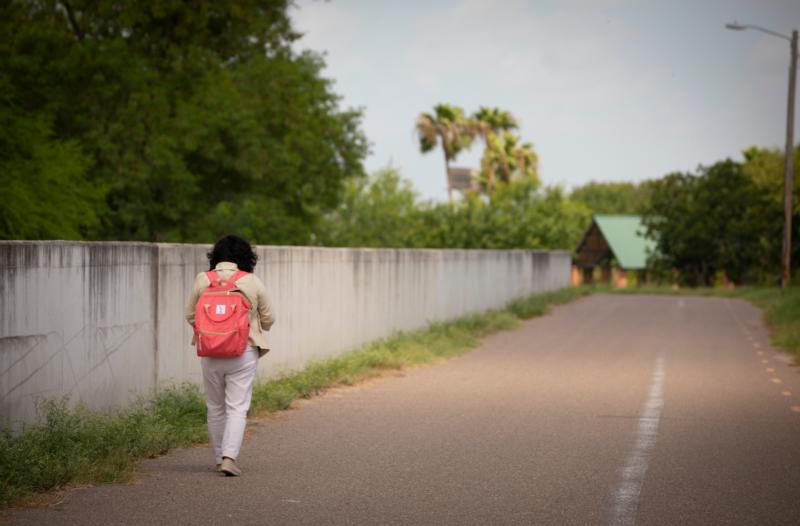 Rhina Guidos, a reporter with Catholic News Service, walks alongside a wall in Hidalgo, Texas, July 3, which serves as a barrier on the border between the U.S. and Mexico. (CNS photo/Chaz Muth)

Rhina Guidos, a reporter with Catholic News Service, walks alongside a wall in Hidalgo, Texas, July 3, which serves as a barrier on the border between the U.S. and Mexico. (CNS photo/Chaz Muth)

WASHINGTON (CNS) — I write about people who love it and people who hate it, people who want to make it bigger and stronger and longer, and those who want to knock it down. On July 3, I finally got to see part of it in person — the much-talked-about border wall.

The visit to the wall, or what there is of it near McAllen, Texas, marked the end of watching a range of emotions during 48 hours of covering the U.S. Catholic bishops’ delegation to two border towns, where the prelates met with migrants who had just crossed into the U.S. and had been released by immigration authorities, as well as children and teens in immigration detention and processing centers.

Via text messages, my friend Brenda Riojas, editor of The Valley Catholic newspaper and diocesan relations director for the Brownsville Diocese, guided me and Catholic News Service colleague Chaz Muth toward the Old Hidalgo Pumphouse, which almost hides with its natural beauty the 18-foot-tall rusty metal fence that looms at its rear.

I’m sure that some may not notice the structure in the distance, since the sounds of birds and cicadas and the sight of abundant flowers and trees overwhelm the senses. To see it up close, one has to exit the pumphouse grounds and walk up a mound.

Approaching the standing structure felt a bit anti-climactic. No topic I’ve written about in two decades in journalism has produced as much hate mail and hate tweets. Some are directed at me just for writing about it or at the bishops and at the Catholic Church for its stance made famous by the pope’s simple motto: Build bridges, not walls.

Talk about a longer wall, its cost, trade-offs, takes up a lot time and oxygen in Washington, far from the residents who live near border cities such as McAllen.

“The wall,” often visualized as a single contiguous structure, is a symbol, depending on how you look at it, of security, for some, and exclusion and hatred, for others.

And there it was, part of it, silent in front of me, splitting the natural landscape as a heavy traffic of birds crossed back and forth above and around it.

The pumphouse near the wall, which is in the city of Hidalgo, Texas, near McAllen, is a 20th-century farming and irrigation museum, but also a world-class birding center. Online descriptions of the trail behind the pumphouse will tell you that you may encounter pelicans, ducks, hawks and parakeets during a visit, but it doesn’t tell you that you may also encounter Border Patrol agents nearby.

One of them stopped by in his car to talk while I cooled down from the heat under the shade of a tree. Even though I’m a U.S. citizen, I’m also an immigrant to this country and it’s not easy to deny the tinge of uneasiness felt at the border given the stories you hear. I knew the agent had a job to do. He asked me some questions and perhaps sensing my uneasiness pointed out a bird in the distance, handing me his binoculars so I could see it better while explaining some of the dangers of the region.

I immediately remembered a conversation with a woman at the Catholic Charities of the Rio Grande Valley humanitarian respite center, who told me how terrified she’d been thinking her child was about to be taken away by immigration authorities, but instead found concern by one of the agents because her child was sick.

I remembered witnessing a spontaneous show of gratitude from a woman who stopped Sister Norma Pimentel in a cafeteria as she was helping children get breakfast, and talking to Brownsville’s Bishop Daniel E. Flores about his visits to those in the detention centers during Christmas and the feast of Our Lady of Guadalupe — times of great sadness for those who find themselves without freedom and thinking about past days of spending those faith-centered days with family.

Few things about the border or the wall and the issues concerning it are black and white. For one thing, it’s not easy, and it’s perhaps infeasible, to physically control a 2,000-mile stretch of land that includes bodies of water, rock, tribal lands, personal property and environmentally protected terrain.

Those like Bishop Flores, who lives and serves in a particularly contentious stretch along the Rio Grande Valley, argue that a better solution may involve taking a harder look at the behavior driving the traffic, including “push factors,” or situations, such as violence or economic and social conditions forcing the migratory movement of people toward the north.

Like many denizens of the area in question, who often heed the cry of the hungry and poor and persecuted that cross the border territory, Bishop Flores agrees that something must be done, but said it should be done without cruelty and indifference toward our fellow human beings.

“We can be a country of laws without being a nation that lacks compassion,” he said during a homily during a Mass at the start of the bishops’ early July visit.

I felt a little bit of guilt, descending on the area for little more than 48 hours, leaving without completely understanding all there is to know, and heading back to write about the people who cause the acrimony in Washington, humbled by the enormity of situation that only those who live there truly understand and whose consequences they are forced to contend with.

NEXT: This year skip the beach, try a mission trip as a family