Once hostile to faith, doctor and deacon shares how to work for God 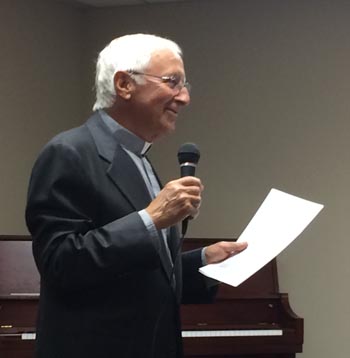 Deacon Alfred Mauriello II, M.D. presents a talk on faith in the workplace during a July 25 theology on tap session at SS. Peter and Paul Parish, West Chester. (Photo by Dan McCarty)

Dr. Alfred Mauriello’s path to becoming a deacon began with a lost child.

After coming home one day from his Exton medical office, Mauriello – an ear, nose and throat specialist – learned that a toddler from a neighboring town was missing. A lapsed Catholic, Mauriello was moved to make a deal with God.

The child was safely returned to her family, and that weekend Mauriello scrambled to make a Sunday afternoon Mass at West Chester University’s Newman Center to keep his promise. Curious, he picked up some reading materials at the campus chapel, and was surprised to see that they were in English, rather than the Latin of his childhood Catholicism.

Drawn to rediscover his faith, Mauriello began attending daily Mass and, along with his wife Sue, became active in his parish. He eventually discerned a call to the permanent diaconate, to which he was ordained in 1999.

On July 25, Mauriello shared his journey, along with his thoughts on integrating faith and work, at a theology on tap session hosted by SS. Peter and Paul Church in West Chester.

The talk, organized by the Catholic Young Adults of Chester County, drew approximately 30 young adults, who listened as Mauriello discussed “Faith on the Job: Maintaining Values in the Workplace.”

Mauriello, a member of St. Maximilian Kolbe Parish in West Chester, described the challenges that have shaped his faith and his ministry. Given his decades-long estrangement from the church, he would initially have seemed an unlikely candidate for ordination.

“My rejection of God became stronger until I found myself to be the judge of what is right and wrong,” Mauriello admitted, noting that he had begun turning away from the faith as early as age 12.

Despite his doubts, Mauriello was never completely cut off from his Catholic roots. He graduated from both La Salle College High School and La Salle University. Before finishing his medical studies at Thomas Jefferson University (now the Sidney Kimmel Medical College at Jefferson), Mauriello married his wife, then an Episcopalian, at a service presided over by a Catholic priest. The couple’s three children were baptized as Catholics, even though the family did not practice the faith.

In his talk, Mauriello traced his providential path back to God. He began his presentation by reading a passage from 1 Cor 15, in which St. Paul — another unlikely apostle — writes “by the grace of God, I am what I am.”

Scripture played an important role in confirming Mauriello’s call to the diaconate. Already busy with family, career and parish activities, and daunted by the one-year diaconate application process, Mauriello was hesitant to respond. Inspired to read the Book of Jonah, he found confirmation of his vocation in the reluctant prophet’s miraculous second chance to fulfill God’s command.

“I prayed to God to touch my heart and not my mind,” Mauriello said.

Prayer is vital to maintaining faith while on the job, Mauriello observed. He expresses gratitude to God while performing difficult operations. He also asks patients, particularly those dying of cancer, if they believe in God. Mauriello once called a priest friend to assist a patient whose pastor would not give absolution. 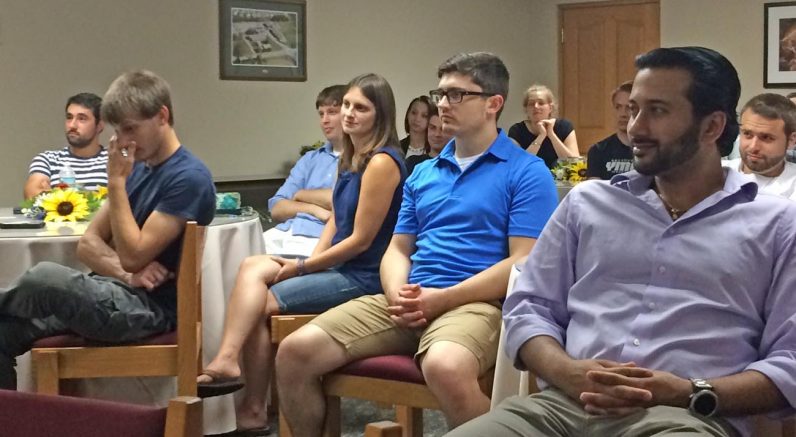 Eucharistic adoration enhances the ability to blend faith and work, Mauriello noted. He reminded attendees that God is always in the tabernacle, and that prayer can simply be an awareness of the divine presence.

“It’s emptying myself to allow God to come in,” he said. “Prayer is not talking, it is listening.”

Being receptive to the Lord enables us to endure the rigors of work, which is a fundamental dimension of our daily lives. Mauriello, whose father was a teenaged factory worker, pointed out that Jesus himself labored as a carpenter with a continuous awareness of God’s presence.

Mauriello’s talk resonated with attendees such as Erin Regan, a critical care nurse at Children’s Hospital of Philadelphia and a parishioner at St. Joseph Parish in Ambler.

“I can relate this to what I do in helping sick children,” Regan said.

Mauriello urged his audience members to realize their potential through faith in action.

“I encourage everyone to develop that personal relationship with God,” he said. “It’s a lifelong journey.”