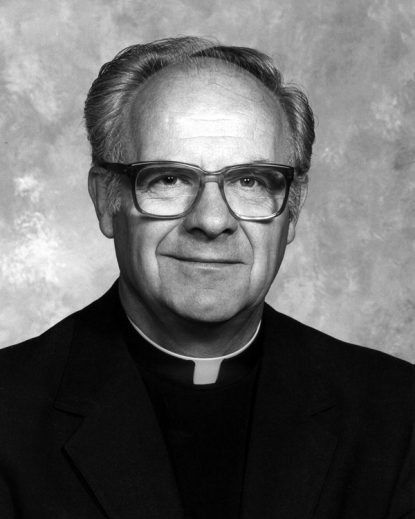 Retired Archbishop Raymond G. Hunthausen of Seattle, pictured in an undated photo, died July 22 at his home in Helena, Mont. He attended the Second Vatican Council and became a pioneer in the ecumenical movement and later offered a pacifist voice to war and the production of nuclear weapons. The 96-year-old archbishop was with family when he died, according to a news release from the Archdiocese of Seattle. (CNS photo/courtesy Archdiocese of Seattle)

SEATTLE (CNS) — Archbishop Raymond G. Hunthausen, who attended the Second Vatican Council and became a pioneer in the ecumenical movement and later offered a pacifist voice to war and the production of nuclear weapons, died July 22 at his home in Helena, Montana.

The 96-year-old retired archbishop of Seattle was with family when he died, according to a press release from the Archdiocese of Seattle. Funeral arrangements were pending July 23.

A memorial Mass for Archbishop Hunthausen was celebrated July 27 at St. Helena Cathedral in Helena by Bishop George L. Thomas, former head of the Montana diocese and now bishop of Las Vegas.

In Seattle, public viewing of the archbishop’s body at St. James Cathedral will be held the afternoon of July 31, followed by an evening vigil service with Seattle Archbishop J. Peter Sartain as presider.

A morning funeral Mass will be celebrated at the Seattle cathedral Aug. 1 with Archbishop Sartain as presider and Father Michael G. Ryan, pastor of the cathedral, as homilist. Archbishop Hunthausen will be interred in a private ceremony in the St. James Cathedral Crypt later that day.

Archbishop Hunthausen had fans and critics alike, who took varying views of his often-controversial stances on nuclear disarmament, broader roles for women in the church and outreach ministry to gays and lesbians.

He was the last living American bishop who participated in all four sessions of the council, which convened from 1962 to 1965. He attended the first session of the council within weeks of his Aug. 30, 1962, episcopal ordination as bishop of Helena and as as the youngest American prelate.

In remarks during an interfaith service at St. James Cathedral in Seattle marking his retirement in 1991, he said the council was “a watershed moment in my life.” At the council’s close, he said, he felt “born again” into the life of the church.

“What happened at Vatican II resonated deeply with me, with my prayers and hopes for a church with a vision and a mission of transforming our lives,” he said.

Eleven years later at a Seattle symposium marking the council’s 40th anniversary, Archbishop Hunthausen recalled being overwhelmed when arriving for the council, but that he quickly embraced the reforms that emerged. Being able to share perspectives throughout his ministry with church leaders of other denominations became one of the most treasured moments of his life.

By praying and discussing his faith with other religious leaders, he said, he realized “we’re all looking for ways to get to God.”

Archbishop J. Peter Sartain of Seattle recalled Archbishop Hunthausen as a “humble and loving servant of the Lord, and a man of peace.”

In a July 22 statement, Archbishop Sartain credited Archbishop Hunthausen for “his pastoral leadership and his development of lay leadership, many programs of outreach to the poor, and other pastoral programs” that built the vibrancy of the Seattle Archdiocese.

“Above all, he loved the Lord and that stood out in every conversation I had with this loving and compassionate servant of God,” Archbishop Sartain added.

Archbishop Hunthausen was born Aug. 21, 1921, to Anthony and Edna Hunthausen in Anaconda, Montana, the oldest of seven children. He received a chemistry degree from Carroll College in Helena in 1943, but felt called to the priesthood and began studies at St. Edward’s Seminary in Kenmore, Washington. He was ordained a priest for the Diocese of Helena June 1, 1946.

As a priest, the archbishop returned to Carroll College to teach and during the summers he pursued graduate studies in chemistry at the University of Notre Dame, Fordham University, The Catholic University of America and St. Louis University.

At Carroll, he also took on responsibilities as athletic director, coaching football, basketball, baseball, track and other sports. His teams were successful and in 1966 he was named to the National Association of Intercollegiate Athletics Hall of Fame, the only bishop so honored.

Archbishop Hunthausen embraced the call to ecumenism and lay leadership throughout his episcopacy. In Helena he focused on liturgy development, working with other religious leaders and collaborative ministry within the church in the years following the council. He also started youth camps and founded a diocesan mission in Guatemala.

In February 1975, Blessed Paul VI appointed him archbishop of Seattle, where he continued to implement Vatican II reforms, training and equipping lay people for ministry. Five years later, he wrote what is widely believed to be the first pastoral letter by an American archbishop identifying steps the church could take to “value the gifts of women equally with those of men in its decision-making and the carrying out of its mission.” Even with his call, he did not advocate for the ordination of women.

The archbishop also became a voice for poor and marginalized people. Catholic Community Services of the Archdiocese of Seattle became the largest non-profit provider of social services in Western Washington under his tenure.

Friends and relatives said that Archbishop Hunthausen eschewed titles and privileges usually afforded prelates and preferred to spend time with lay people and activists as well as people in need.

It was in Seattle where Archbishop Hunthausen became an outspoken proponent of peace and justice issues, speaking to organizations, college campuses and community groups. He raised moral questions about the nuclear weapons buildup that the U.S. undertook in the 1980s and particularly questioned the need for the nuclear-armed Trident submarine and its West Coast base in Bremerton, Washington, across Puget Sound from Seattle.

His beliefs led him in 1982 and 1983 to withhold half of his federal income tax payment, representing the percentage of tax dollars spent on the U.S. military.

By 1983, however, his pastoral practices and stances came under scrutiny of the Vatican, which directed then-Washington Archbishop James A. Hickey to conduct an apostolic visitation. Although the apostolic nuncio to the U.S. announced the case closed in 1985, the Vatican appointed then-Father Donald W. Wuerl as auxiliary bishop of the Seattle Archdiocese.

A year later the Vatican ordered Archbishop Hunthausen to turn over some authority to Bishop Wuerl including responsibility for liturgy, the archdiocesan church court, seminarians and priestly formation, laicized priests and moral issues of health care and ministry to gay Catholics.

Despite his accomplishments, Archbishop Hunthausen later was criticized by sexual abuse survivors who claimed he knew or should have known about abusive priests and members of religious orders during his tenure in Helena and Seattle.

The Seattle Times reported that from 1987 to 2010, the Seattle Archdiocese paid about $42 million to 300 abuse victims. The Helena Diocese, facing more than 360 abuse claims, filed for bankruptcy in January 2014 and offered a $15 million pay out to victims.