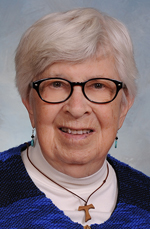 Sister Anna Hope Bauerlin, O.S.F. (formerly Sister Miriam), 93, died in Crozier Hospital on July 24, 2018. She had been a professed member of the Sisters of St. Francis of Philadelphia for 70 years and had recently celebrated her diamond jubilee.

Sister Hope was born in Philadelphia, but as a child moved to Wilmington, Delaware, where she was a member of St. Thomas Parish and a graduate of Wilmington High School. She entered the congregation in 1946 and professed her first vows in 1948.

Sister Hope worked for 23 years in the Archdiocese of Washington, DC. She was a staff member at Mary’s House in Rockville, Maryland, and served as housing coordinator at Christ House in Washington. She also volunteered at the Healthy Babies Project and at the Veterans Hospital, both in Washington. She ministered for eight years in the Archdiocese of Baltimore, teaching at St. Elizabeth School and serving as a clinical instructor at the old St. Joseph Hospital in Baltimore.

Sister Hope ministered for nine years in the Diocese of Harrisburg, working as a clinical instructor at St. Joseph Hospital in Lancaster. She spent six years in the Diocese of Allentown, serving as director of the school of nursing at St. Joseph Hospital in Reading. During her tenure there, she was a member of the provincial council for the Sisters of St. Francis Immaculate Conception Province, which was based in Philadelphia but which also included missions in the Dioceses of Allentown and Harrisburg.

Additional ministry experiences included serving as a medical and surgical supervisor at St. Elizabeth Community Hospital in Baker, Oregon; as a staff nurse at St. Mary Human Development Center in Ridgeland, South Carolina; as a nursing consultant at Catholic Social Services in Corpus Christi, Texas; and with the children of St. Ann Home in Spokane.

Sister Hope moved to the Archdiocese of Philadelphia in 2012, serving in local house ministry at Our Lady of Angels Convent, the congregation’s motherhouse. She had ministered in the archdiocese earlier in her career, serving as a clinical instructor at St. Agnes Hospital in Philadelphia. In 2017, she moved to Assisi House where she focused on prayer ministry and hospitality. She was a longtime member of the congregation’s JPIC Committee, and continued to attend meetings even after moving to Assisi House.

Funeral services will be held in Assisi House, 600 Red Hill Road, Aston, Pennsylvania, 19014 on Tuesday, July 31, 2018.  A Christian wake service will be held at 9:30 a.m. followed by a viewing. A Mass of Christian burial  will be celebrated at 11 a.m. Burial will take place at Our Lady of Angels Cemetery in Aston.

Sister Hope is survived by nieces, nephews and her Franciscan family. Donations in her name can be made to the Sisters of St. Francis Foundation, 609 S. Convent Road, Aston, PA 19014.