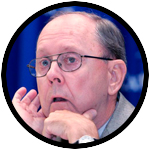 Twenty-five years ago, I published a book about clericalism in the Catholic Church with the title “To Hunt, To Shoot, To Entertain” — a quotation from a 19th-century British monsignor capsulizing his view of what the laity are competent to do.

The book was positively, though sparsely, reviewed and enjoyed modest sales. As far as I can tell, it accomplished little or nothing of a practical nature beyond earning me a reputation as a sorehead.

“‘Shaw’s just mad,'” was how one cardinal cheerfully summed up what he told me he’d heard others say.

I couldn’t argue with that. I was mad then, and — in the wake of the McCarrick scandal — I’m still mad now. Mad about the harm that clericalism has done to the church in this case and in so many others.

The difference between back then and now is that now, very many other Catholics are seeing red over this disastrous, distasteful affair.

If toppling the regime of clericalism in the church follows the disclosure that a cardinal (now a former cardinal) is accused of sexually abusing boys and young men — so be it. The cleansing these unsavory revelations may help bring about is long overdue and now more desperately needed than ever.

Obviously this particular scandal has many threads, many aspects, including sexual ones. Clericalism doesn’t totally account for what happened. But it is an important part of the explanation, and it’s essential that we understand how that was so.

Clericalist attitudes may have been present in some of the offensive behavior we’ve lately been hearing about. But more to the point, clericalism goes a long way to explain Archbishop McCarrick’s continued rise to the topmost levels of the hierarchy, even though the allegations and suspicions concerning him were known to highly placed persons in the church.

Despite what they knew, these highly placed persons apparently turned blind eyes to all that while allowing the man’s ascent to continue — from cardinal’s secretary to auxiliary bishop to bishop to archbishop and, finally, all the way to cardinal himself.

This was clericalism at work within a closed, clericalist system.

After all, the candidate for promotion was a well known part of the ecclesiastical old boys network, a man with undoubted talents, including, it seems, a talent for ingratiating himself with the sort of highly placed persons weighing his advancement to the next rung up the ladder.

No doubt he had certain faults of a particularly ugly kind, but the highly placed persons must have felt that they neither needed nor, certainly, wanted to know too much about all that. After all, wasn’t a lot of it was hearsay and rumor? And anyway wasn’t this a case where the good outweighed the bad?

Thus so a career was constructed, an unknown number of lives were ruined, and the stage was set for a disaster for the church. Call it a clericalist trifecta.

If any good is to come from this catastrophe, it will be because it occasioned real reforms. But what would real reforms look like? At least three major suggestions have surfaced to date.

One is partially visible in the pledge by Cardinal Daniel N. DiNardo of Galveston-Houston, president of the U.S. bishops’ conference, that, over and above the “canonical trial” announced by the Vatican, the conference “will pursue the many questions surrounding Archbishop McCarrick’s conduct to the full extent of its authority.”

That’s fine as far as it goes, but here’s hoping the bishops don’t make their probe an exercise in episcopal unilateralism. Credibility requires that this be a full scale investigation involving competent laypeople in its planning and execution. It would be a serious mistake to investigate the damage done by clericalism in a clericalist manner.

Another suggestion — made most prominently by Cardinal Sean P. O’Malley of Boston, who heads the special Vatican commission on sex abuse — is to add bishops to the list of those against whom the sanctions in the U.S. bishops’ norms on the abuse of children are directed.

This of course is something that should have happened 15 years ago, when the norms were being developed. Presumably the idea of sanctioning bishops was dropped back then because in church law bishops have no real authority to sanction one another — that power rests solely with the pope.

But minimally, it seems, bishops should be able to censure erring brothers guilty of some conspicuous fault. If ever that was obvious, surely it’s now.

Finally, it appears from what has happened that the process by which bishops are selected and promoted stands in need of revision to make it publicly accountable and take it out of the hands of a small group operating in strict secrecy.

As matters stand, the papal legate — the nuncio — can consult laypeople as part of the process, but this is done only individually and in secret. A serious reform might see the addition of lay consultative bodies at all levels, from dioceses to the Vatican, and at least some limited degree of transparency concerning what’s going on.

No one wants to turn the selection and promotion of bishops into something even remotely resembling an American-style election. But some lifting of the heavy hand of clericalist control and the veil of secrecy that accompanies and abets it would clearly be in order.

In concluding that book about clericalism, I expressed the hope that the day would come when “the primordial reality of membership in the church — of engrafting into Christ — is not that one is a cleric or a religious of a layman, but that we are all “christifideles,” Christ’s faithful, whom God calls, individually and uniquely, to work together in harmony for his kingdom’s coming in this life and together to enjoy forever the definitive fulfillment of that kingdom in the next.”

I’m still hoping for that.

Shaw, who lives in Silver Spring, Maryland, is the author of more than 20 books and numerous articles and commentaries. He was information director of the NCCB/USCC (1967-1987) and the Knights of Columbus (1987-1997). This column was written jointly for Catholic News Service and The Angelus newsmagazine of the Archdiocese of Los Angeles.

PREVIOUS: Keep holy the commute and the car pool

NEXT: No more turning away