Meet two new refugee families — and learn how you can help

Within a few weeks of Valeriy’s arrival from Ukraine with his wife, children and ailing mother, he had co-founded a construction business and was taking English classes three nights a week, thanks to help from archdiocesan Catholic Social Services and local parishioners.

The U.S. accepted just under 54,000 refugees in fiscal 2017. The U.S. Catholic Bishops’ Migration and Refugee Services department resettles about 30 percent of this population, working through about 100 diocesan offices.

In the Archdiocese of Philadelphia, Catholic Social Services administers the Refugee Resettlement Program, which manages to offer services with a stipend it receives from the U.S. State Department of just $1,125 per arrival.

The program has many needs, including:

Program staffers routinely help their newly arriving clients face the inevitable challenges of adapting to a new life in the Philadelphia area. But the successes of these families inspire the staff to keep going.

Take Apolina, a single Congolese mother, and her two teenage sons, whose arrival in America was “one of the greatest moments in their lives,” recalls case manager Walky Joseph.

Their first visit with CSS staff lasted 24 hours. There followed 90 intense days of acclimating the family, facilitating translation, riding buses with them to learn routes and their new culture, setting up public benefits, enrolling the kids in school and Mom in ESL, finding jobs for Mom and the elder brother, taking the family for their first medical checkups, and more.

That depth of personal accompaniment “allowed the family to take charge of their own responsibilities and to live the American dream one step at a time,” said Joseph, who calls the family “very determined.” After 90 days, the family was referred to the African Family Health Organization in Philadelphia for future assistance.

Still, said Joseph, “Catholic Social Services will always be there to support and assist them in their ongoing needs.”

Then there is Valeriy, from Ukraine. Within weeks of reaching the United States with his wife, three young children, and ailing mother, Valeriy established a construction business with his brother, enrolled in ESL class three nights each week, and moved his family into an apartment.

His children also quickly made huge strides. Their rapid progress in English inspired their mother to tackle the language; now, she cares for her mother-in-law and manages her own shopping with limited need for an interpreter. Settled in a Ukrainian and Russian community, Valeriy is managing his bills and looking for a second job. The children are fluent in English, and the family is virtually self-sufficient.

Like so many immigrants CSS welcomes, says case manager Reem Sleiman, Valeriy is “determined and ambitious to take advantage of his new freedom and dreams.”

Learn more about the program and how you can help at WelcometheRefugee.com. 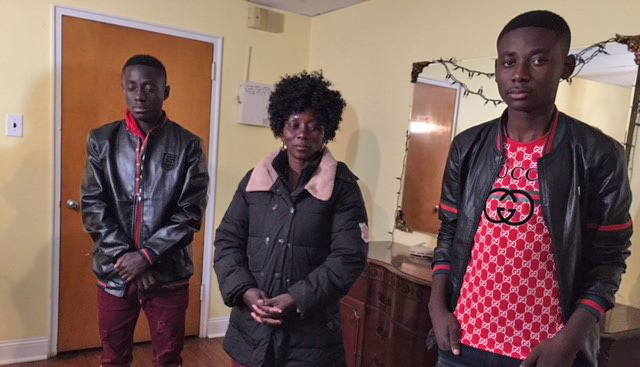 For Congolese native Apolina and her two teenage sons, reaching America was “one of the greatest moments in their lives,” said their Catholic Social Services case manager, Walky Joseph.

NEXT: Catholic parishes take up call to welcome refugees in region