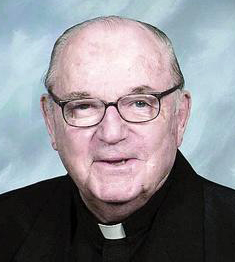 Born in Atlantic City, N.J., the son of the late Owen James Breen and the late Catherine (Smith) Breen, he attended Holy Child School in Philadelphia and La Salle College High School where he was senior class president and chairman of the senior prom. After graduation he enlisted in the Merchant Marines for two years before entering St. Charles Borromeo Seminary.

He was ordained May 11, 1957 at Immaculate Conception Church, Germantown by Archbishop John F. O’Hara and his brief first assignment was as parochial vicar at St. Joseph Parish, Frackville.

Most of his career was in the education ministry at Cardinal Dougherty High School, where he served on the faculty for 35 years until his appointment as pastor of St. Lawrence in 1992. He was named pastor emeritus in 2004.

“Father Breen was a good priest who served God and the people of the Lord with generosity and great love,” said Father William Donnelly, who served with him at Cardinal Dougherty.

Msgr. Francis Schmidt, a seminary classmate of Father Breen, especially remembers him from his years of service with Catholic youth, and his loyalty to Cardinal Dougherty High School, actively supporting its sports program and alumni even after the school closed as well as La Salle and Philadelphia sports programs in general.

Many may remember Father Breen as a sports enthusiast, as a player, coach or chaplain, but there was much more to him than that, Father James Sullivan maintains.

He was in his deacon year and was assigned to St. Anne in Port Richmond, where Father Breen was in residence while teaching at Cardinal Dougherty.

“He was a mentor first and foremost and a friend to me,” Father Sullivan said.

“He told me, ‘It’s God work, you are an instrument. It’s God’s game, but you play with your own swing. In plain words, be yourself.’ He was passionately a priest and there was more to him than sports. I remember he had to get up really early because of the distance to Cardinal Dougherty. He would almost always start his day with a Mass celebrated at the side altar of the Blessed Mother.”

Wherever Father Breen went his room was filled with sports memorabilia, but right by the chair where he would sit, there would always be a rosary, Father Sullivan recalls.

A viewing for Father Breen will be held on Wednesday, Aug. 8 from 6 to 8 p.m. at the Givnish Funeral Home, 10925 Academy Road, Philadelphia. There will also be a viewing at St. Andrew Church, Drexel Hill on Thursday, Aug. 9 beginning at 9 a.m. followed by his 11 a.m. funeral Mass celebrated by Archbishop Charles J. Chaput. Concelebrants will include Fathers Joseph Howarth and Christopher Rogers, and Father Sullivan, who will be the homilist.