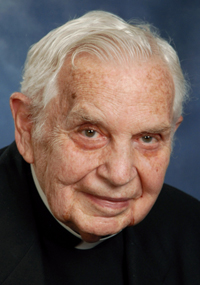 Born in Philadelphia the son of the late John A. Shields and the late Irene J. (Lion) Shields, he attended St. Stephen School and Northeast Catholic High School for Boys before entering St. Charles Borromeo Seminary.

He was ordained May 18, 1963 at the Cathedral of SS. Peter and Paul by Archbishop John J. Krol and his first assignment was as parochial vicar at Immaculate Heart of Mary Parish, Philadelphia.

He served on the faculty of Roman Catholic High School for 10 years then was vice principal for the girls’ side at Cardinal Dougherty High School.

He then attended the Gregorian Pontifical Institute and Pontifical North American College in Rome where he earned a license in sacred theology (STL), after which he served as spiritual director at St. Charles Borromeo Seminary.

He then served as parochial vicar at St. William Parish and pastor of St. Anselm Parish, both in Northeast Philadelphia. This was followed by ministry as senior priest at Mary Mother of the Redeemer, North Wales, where he remained for much of his retirement years.

“He was a great guy, he loved being a priest and he was a good, holy, faithful priest,” said Msgr. John Conway, the pastor of Mary Mother of the Redeemer.  “The people here at MMR loved him and in fact he was very close to a number of them. He had a very small family and they were out of state so the people here adopted him. He was very involved with a group for parents with adopted children and in earlier years supported our Cub Scouts and Boy Scouts. He was always ready to go into the confessional. “

Msgr. Richard Bolger, who got to know Msgr. Shields in recent years, remembers him as “a good priest faithful to the church. He really liked to be among people,” he said.

During Msgr. Shields’ time at Mary Mother of the Redeemer he made many friends, including Dino and Nancy Verrillo.

“He just loved people and he just loved children,” Nancy said. “They would line up just to shake his hand. He knew a little bit about everything, but always wanted to know about you. He was most proud of being an assistant director at the Eucharistic Congress in 1976 and a vice chairman at the canonization of St. John Neumann in Rome. He was loved, and I’m a better person for having known him.”

“He knew a little bit about everything but was always aware of where he was and he was respectful and humble,” Dino said. “He was always obedient to the church and didn’t take himself too seriously.”

There was a viewing for Msgr. Shields at Mary Mother of the Redeemer Church on Monday, Aug. 20. It was followed by his 11 a.m. funeral Mass with Bishop Michael Fitzgerald as the principal celebrant.

NEXT: Sister Elizabeth Mercer, serving in 7 dioceses, dies at 91