The truth that set him free

“I believe the Lord has put me here for this very moment. Throughout all of the pain, the Lord has never left me alone. He has continued to love me, heal me and still calls me to serve him.”

Father Brendan McGuire spoke those words in a homily it took him 35 years to write. It was his story of being abused by a priest as a young man. The priest was ostensibly helping him discern a vocation, but in fact was grooming young Brendan for four years in preparation for a sexual assault.

(See the related story: In homily, Calif. priest says he was abused, hears from dozens of victims)

Words fail to adequately describe the blasphemy of such a plot. What seems remarkable is that Father McGuire could still respond to God’s call, angry as he was at what happened.

“After the original offense 35 years ago, the Lord still asked me to be (a) priest,” Father McGuire recalled in a homily he preached in early September and that was reprinted by Catholic News Service. “I told the Lord to go away many times!”

Much to Father McGuire’s surprise, the Lord won out: “I love my priesthood and love my ministry, here in the parish and at the diocese and I fully intend to stay in ministry as a priest.”

For all those years, Father McGuire never told anyone what happened. But inspired by the latest surge of publicity about clergy sexual abuse, he recently told his family and friends. Then he told his parish about his experience, inviting other victims to contact him, and advocating for change. So far, 45 victims have contacted him, five of whom are fellow priests.

In his homily, Father McGuire asked his parishioners to “please remember the victims. Advocate for them that they may receive justice.”

He also asked Catholics to encourage their bishops “to be forthright in telling the full truth of the past.” 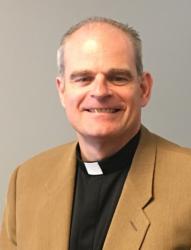 I’ve been thinking a lot about Father McGuire and his remarkable story in the context of the great anger welling up in the church right now. Those who have been victimized, like Father McGuire, are understandably angry for all they have experienced at the hands of those they trusted.

Father McGuire finally faced his anger. Telling his story has led to his own healing. “The truth has set me free,” he said.

For those who are victims, whether at the hands of churchmen or others, Father McGuire’s advice is to “ask the Lord to gently give you the strength to find your voice.”

For the rest of us, we must find our voice as well. That may mean communicating our own frustration and hurt to our pastors and our bishops, but to do so respectfully.

Many bishops, including Father McGuire’s own, are listening to their people and discerning a path forward.

It is more important than ever to pray for our entire Catholic family as we advocate for reform and accountability. This is a moment of great pain, but as Father McGuire realized, God will not abandon us. “He has never left us and he will never leave us alone. May we find our voices and advocate for the victims and change, and may the church leaders open their ears.”

Erlandson, director and editor-in-chief of Catholic News Service, can be reached at gerlandson@catholicnews.com.

PREVIOUS: Listen to the sound of church reform bubbling up in parishes

NEXT: Leave the church that abused her? Survivor trusts God to do the healing