Our Lady of Angels rises from ashes while rebuilding from fire 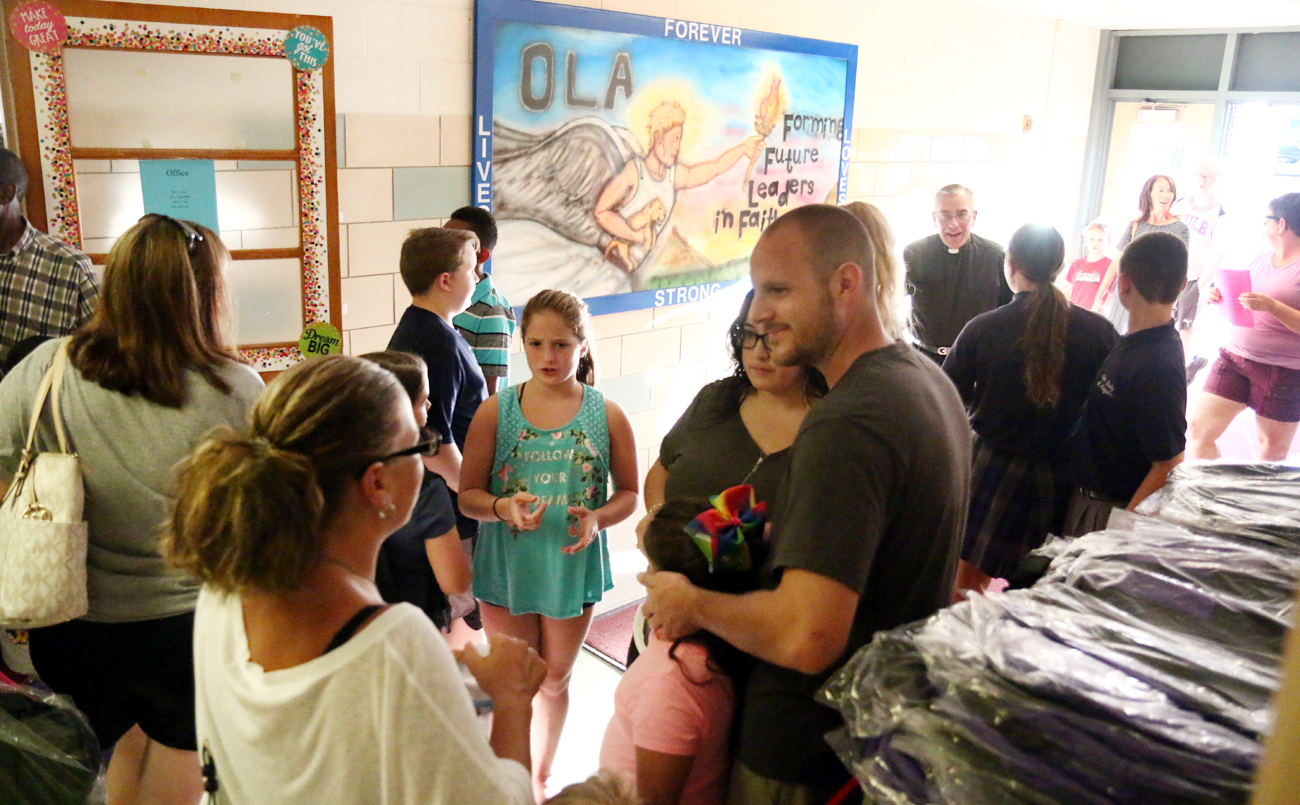 Students of Our Lady of Angels Regional School, along with the parents, attend orientation for the 2018-2019 academic year at Cardinal O’Hara High School. After a devastating July 18 fire, Our Lady of Angels has relocated to the high school while its new building is under construction. (Photo by Sarah Webb)

Msgr. John Savinski rarely leaves his parish, Our Lady of Perpetual Help in Morton, but he decided to take a brief vacation in the middle of July.

During his few days out of town, Our Lady of Angels Regional School — located on the parish campus — was damaged in a July 18 fire that destroyed the older part of the building, where most of the classrooms were.

At this time, the fire’s exact cause has not been pinpointed, although investigators suspect it was probably electrical in nature, beginning in the unused attic space which collapsed into the classrooms below.

That portion of the school was built in the 1950s as a single-story structure with a peaked roof, and until six years ago, it was the parish school. As a regional school, it is now independent of Our Lady of Perpetual Help, and serves students from number of parishes. Our Lady of Perpetual Help provides about a third of the students, with others coming from St. Joseph in Collingdale, Our Lady of Fatima in Secane, St. George in Glenolden and nine other parishes.

With the school year opening on Sept. 5, the first priority after the fire was what to do with the students.

Coming back to the campus was not an option at this time, even though the newer section of the building had been protected from the flames by a firewall and by the work of firefighters from about 20 different stations that responded to the emergency.

(View a photo gallery on Our Lady of Angels Regional School in its temporary location at Cardinal O’Hara High School.)

“They really saved that and also the houses that are nearby and could have caught fire,” Msgr. Savinski said.

Nevertheless, that section of the building will need extensive non-structural remediation because of heavy smoke and water damage.

“The most important thing is no one was in the building,” said Msgr. Savinski. “It could have been a tragedy.”

Although the outer walls of the older section survived the blaze, that portion of the structure cannot be renovated, since it would be subject to updated requirements for new school construction — such as classroom size, handicapped access and lavatory features — that did not exist when it was built.

Fortunately, Cardinal O’Hara High School, located four miles away in Springfield, offered an unused section of its building as a temporary location for Our Lady of Angels Regional School.

When school opens, the same faculty that taught the students last year in Morton will return to resume classes. A target date of September 2019 has been set for completion of a rebuild.

Through the archdiocese, the school has sufficient insurance coverage for most of the expenses involved, Msgr. Savinski explained.

Meanwhile, the day-to-day running of Our Lady of Angels Regional School will the responsibility of principal Susan Lowe, who is new to the school after a 27-year tenure at Notre Dame de Lourdes in Swarthmore, first as a teacher and for the past decade as principal. She had only been on the job at Our Lady of Angels for a few weeks when the fire struck.

It has taken planning, but “we are all prepared  for the first day of school on Sept. 5,” Lowe said. “All of the textbooks have been coming in, and we’ve gotten some donations.”

Lowe noted that insurance had provided new Chromebooks for the students and new laptops for the teachers.

Although the accommodations are temporary, Lowe said that the arrangement would allow the younger students to interact with their older counterparts on occasion.

“There is plenty of space,” she said. “We will be segregated from the high school when we want, and we can come together when we want, for example at liturgies.”

On opening day, Lowe expects about 330 students, with a slight drop especially in the pre-kindergarten half-day sessions mostly because of distance to the new location. Despite the decrease, Lowe remains heartened.

“The outpouring of love and the generosity of the people has been very uplifting, and all of the pastors have been very supportive,” Lowe said.

Putting together a contingency plan for Our Lady of Angels has taken the cooperation and assistance of many people, especially the pastors of the affected parishes, Cardinal O’Hara High School and concerned laity.

Among the latter group is Lou Brown, a member of Our Lady of Perpetual Help Parish, whose two sons Matthew and Owen are graduates of the school. An architect and founder of Charleston Design Studio, Brown is experienced in construction.

“We are pretty optimistic everything can came together by September 2019,” he said. “If we are aggressive with the work, we can make it. The building was really outdated and had lived its lifespan. We want to keep everything we had, but nice and new and up to code, so the kids can learn. I haven’t heard anyone say it shouldn’t be rebuilt.”

Meanwhile, ribbon-cutting is planned for Our Lady of Angels Regional School at Cardinal O’Hara High School on the morning of Sept. 5, the first day of the school year.

Editor’s note: Although most of the rebuilding expenses for Our Lady of Angels will be covered by insurance, many smaller items will not be reimbursed. Donations can be sent to Our Lady of Angels Regional School, 2130 Franklin Ave., Morton, Pa. 19070.