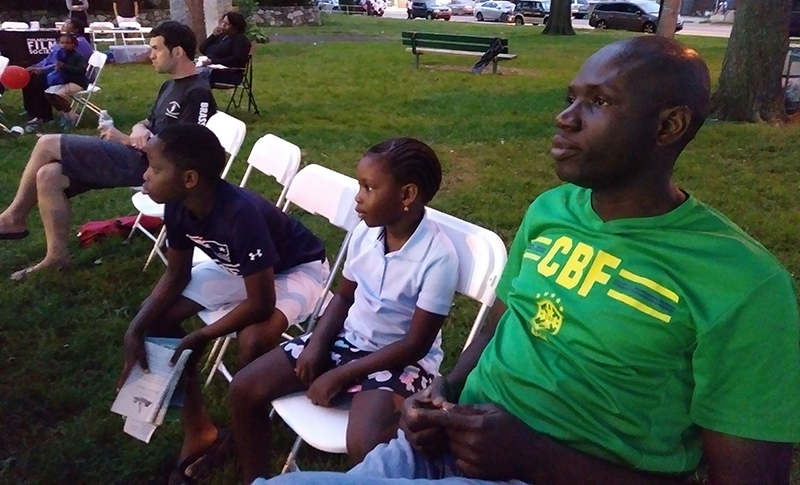 The event drew more than 60 attendees who gathered at the Lawncrest Recreation Center to watch “Step,” an award-winning 2017 documentary that chronicles the step dancing team of an inner-city Baltimore girls’ high school.

Developed by African American fraternities and sororities, step dancing combines drill and marching band routines with both traditional African and American urban dance elements. The genre, which emerged in the U.S. during the 1980s, features in a number of national competitions, as well as popular films such as “Drumline” and “Stomp the Yard.”

CCS community relations liaison Ginger Smith said that “Step” was a solid selection for her agency’s first movie night, which also marked CCS’s first collaboration with the Philadelphia Film Society. The society – which works in part to strengthen communities through cinema – provided the movie, the performance licensing and the necessary audiovisual equipment at no charge, while supplying CCS with a stipend to cover additional event costs.

“We were excited about this film, since it highlights a particular step team’s journey, but also dives into the young ladies’ personal stories,” said Smith, who noted several area step teams perform in the annual Lawncrest Fourth of July parade.

Smith added that step dancing helps to enhance the local community, with teams becoming “a second family that builds character and other valuable skills.”

Along with popcorn and other light refreshments, a number of resource tables were available for attendees interested in learning more about services available through CCS and its area partners.

Gaspar Santos, a community initiatives specialist with the Free Library of Philadelphia, staffed one such table, which included information on an upcoming Oct. 9 literacy event that the library’s Lawncrest branch will co-host with CCS.

Santos said that partnering with CCS, which has extensive connections with a number of community organizations, agencies and businesses, enhances the Free Library’s own resources.

“We actually just finished a book drive, and we’ll be making a donation to CCS,” said business development specialist Bill Quinn. “These projects are near and dear to our heart.”

Local resident Birane Fall attended the film with son Mouhamete and daughter Maguette, and noted that events such as outdoor movies help break down barriers within the neighborhood.

“So often people are in their houses, with the doors closed,” said Fall. “I’ve been here in the U.S. 10 years, and I haven’t been involved much with the community, but this kind of event brings us together so we can share our experiences.”

Another area resident, Peter McPhillips, added that the gathering – like CCS’s overall programming – is a natural extension of the church’s mission.

“It’s an example of what the community can be,” said McPhillips, a member of St. William Parish in Northeast Philadelphia. “The church itself should always be open; people should think, ‘Oh, that’s somewhere I can go for help.’”

For Smith, who is planning additional screenings in the coming months, simply watching a free movie with family and neighbors is a catalyst to community.

“Just come out and have some together time,” she said.

NEXT: Seniors dance away summer in South Philly