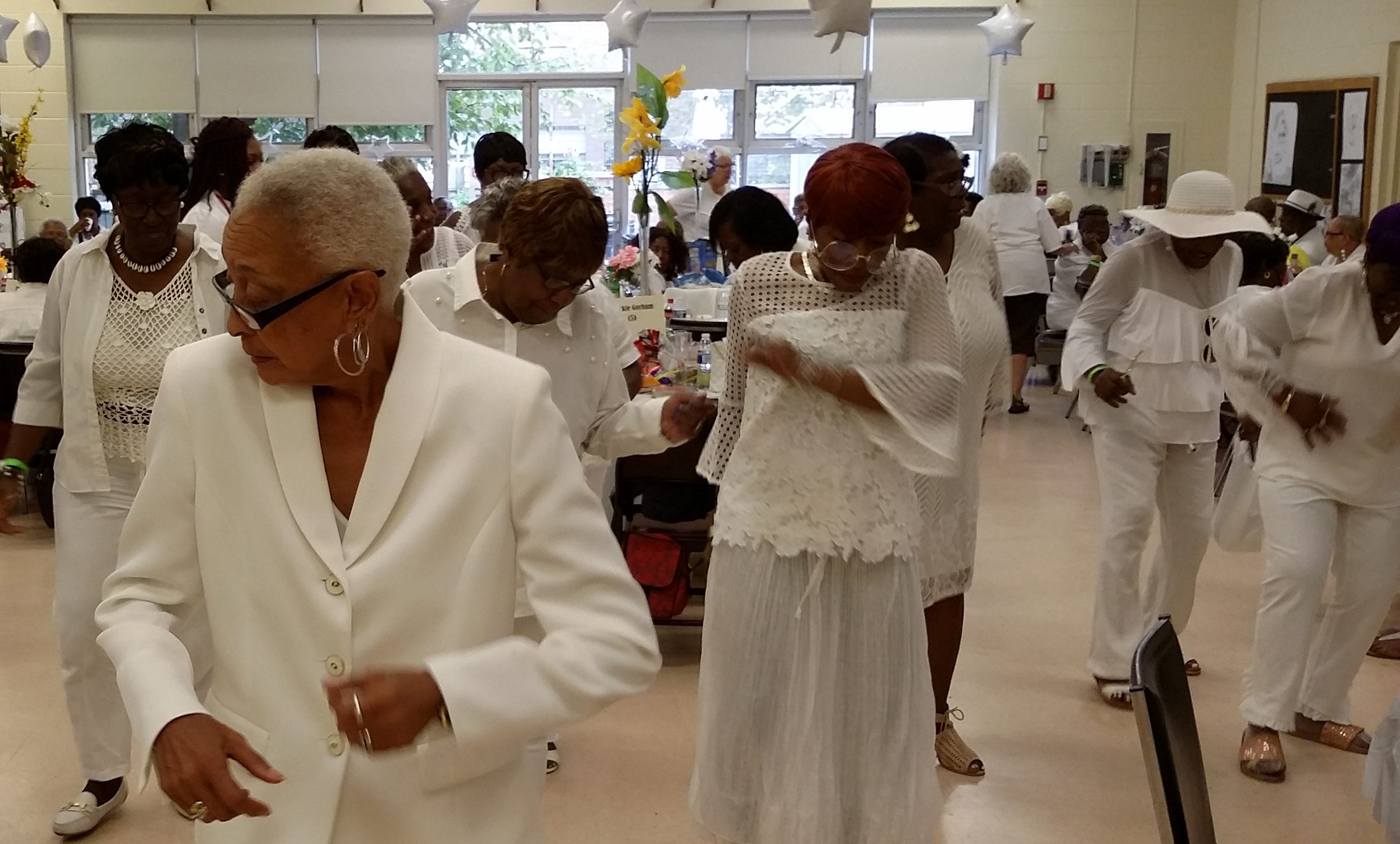 Members of St. Charles Senior Community Center take to the dance floor at an annual end of summer party, Sept. 21. The center, one of four operated by archdiocesan Catholic Housing and Community Services, promotes wellness and food security among its 500 members. (Photo by Gina Christian)

Dance music echoed in South Philadelphia on Sept. 21 as a lively group of senior citizens celebrated the end of summer.

Now in its fifth year, the “White Party and Garden Cabaret” has become a social staple at the St.
Charles Senior Community Center, a ministry of archdiocesan Catholic Housing and Community Services (CHCS). Located at 1941 Christian Street, the center has offered adults 50 years and older opportunities for socialization, exercise, recreation, education and nutritional support since 1971.

Accredited by the National Institute of Senior Centers, St. Charles is one of four CHCS senior community centers located in Philadelphia. Part of the secretariat for Catholic Human Services, CHCS supports older adults within the archdiocese through in-home and parish-based support, as well as geriatric care management, adult day care and senior housing communities. Last year, CHCS served over 4,600 adults.

At the Sept. 21 event, more than 100 seniors — most dressed in white formal wear — enjoyed lunch as a DJ played a mix of Motown and current pop hits. Entrees were left to cool as the music heated up, with almost a dozen dancers on the floor at any given time during the event.

“They lasted longer than I did,” said Dianna Carter, the center’s social services coordinator. “They have so much energy. I was like, ‘I’m done,’ and they said, ‘No, we’re just getting started.’”

Raffles and prizes rounded out the festivities, with many giveaways including free food, said Kathy Boles, who has managed the St. Charles center for 22 years.

(See our video of the Sept. 21 celebration at St. Charles Senior Community Center.)

According to the Food Research and Action Center (FRAC), a national non-profit organization based in Washington, D.C., 15 million U.S. households are considered “food insecure,” including 3 million households with at least one adult aged 65 or older. FRAC also notes that millions of additional households with seniors “face marginal food security.”

The boxes supplement the center’s longstanding efforts to ensure its seniors eat well.

“Overall, we have about 500 members, and we feed approximately 60 per day,” said Boles. 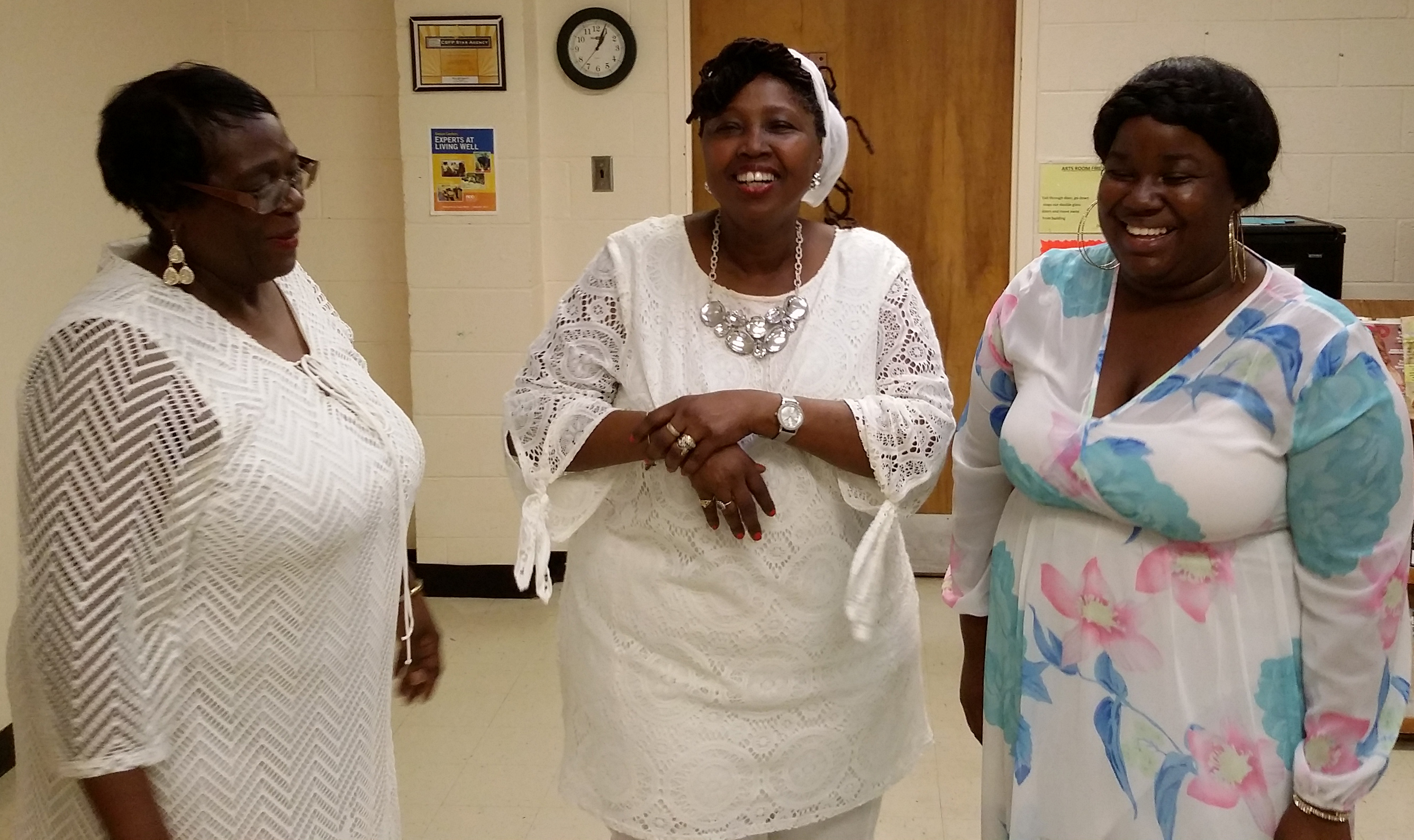 In addition, the center emphasizes the importance of regular exercise and physical activity, offering a number of classes and events that keep seniors limber.

Cookie Brawner, a St. Charles member since 2011, credits the center’s fitness classes with assisting her recovery from a shoulder injury.

“Within a year’s time of coming here, I could lift my arm again,” she said.

Brawner, who also serves as a volunteer and advisory board member, added that St. Charles’ frequent dances revive both body and soul.

“This is the most partying center I’ve been to,” she said. “And dance moves today are like exercise, which keeps us young.”

Program coordinator Shante Crawford came up with the idea for the White Party, which deliberately flaunts an American fashion tradition that discourages wearing white after Labor Day.

“Sometimes we have to push the limits just a little bit,” Crawford winked.

“We are absolutely, and always, dispelling myths about aging here at St. Charles,” she said. “I keep telling my family that in reality, the folks in here are younger than I am.”