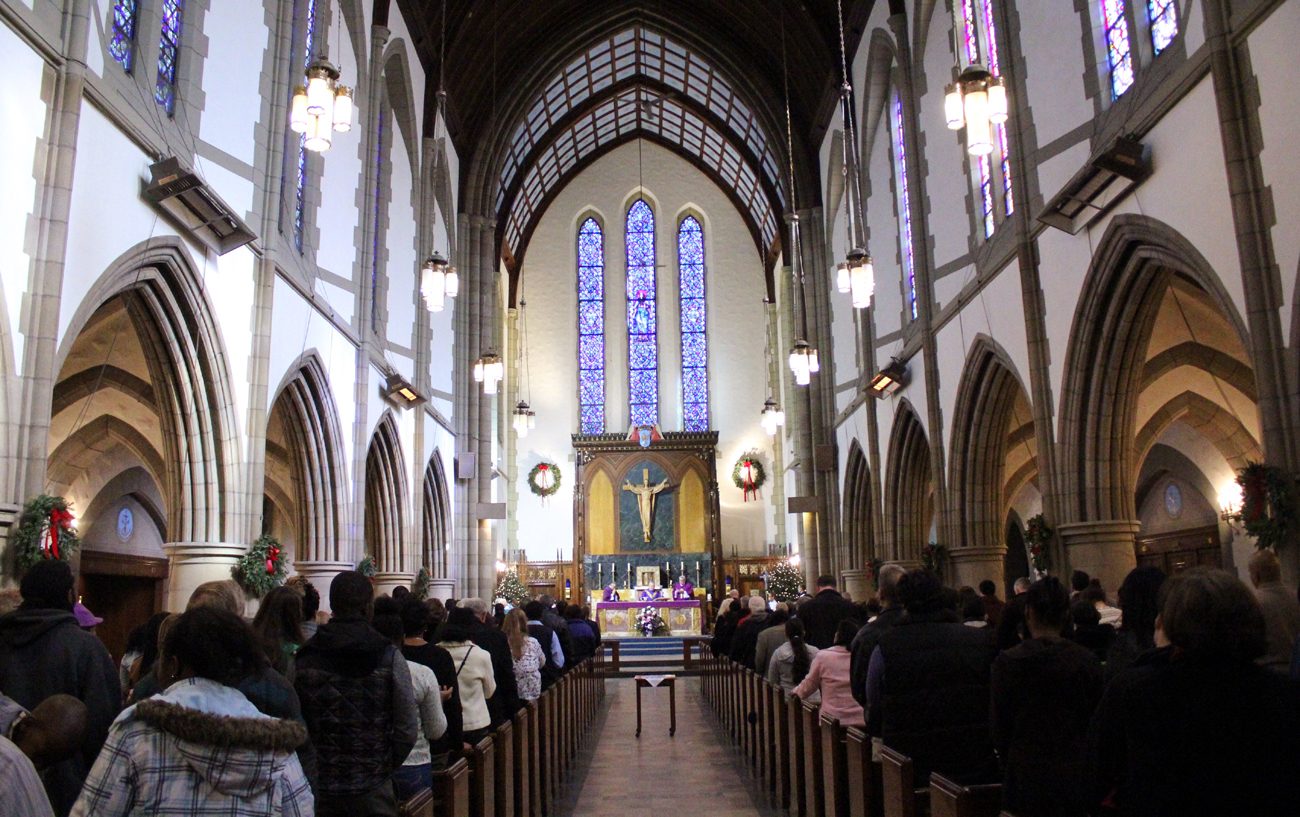 It’s almost impossible to turn on a news broadcast or read a newspaper without an account of the terrible scandal of children sexually abused by predator priests in the Roman Catholic Church being discussed, very often by folks who only see the inside of a church when cameras are rolling.

What do ordinary Catholics who love their faith think? Has their faith been shaken, and what can be done about it?

Judging from a sampling taken from people in the pews in parishes of the Archdiocese of Philadelphia last week, many are not happy and they believe changes must be made in the church.

Patricia Felker is a long-time member of St. Joseph Parish in Collingdale, and personally has good memories of her parish. When she was a young widow with children, her pastor, who had a stern reputation, quietly gave her financial assistance. “No one needs to know,” he told her.

In recent years as the abuse scandal unfolded, she sat down with her six sons, all of whom had been altar servers, and asked if anyone had tried to do anything to them. “No,” they assured her.

But she is furious about what has since happened.

“It’s very hard to separate your faith from the people who are running the show,” she said. “I don’t understand that the hierarchy cannot see that people are not coming to church because of the scandal and the cover-up. They cared more about the institution than the people. If they could just think of the families who were hurt. These guys were sick and the hierarchy should have been doing something about it.

“I’m angry about money they have paid out to keep this private. You want to support your parish, but you hate giving the money because so much goes to the archdiocese. These guys are sitting in retirement and we are paying for it. They should be in jail.” 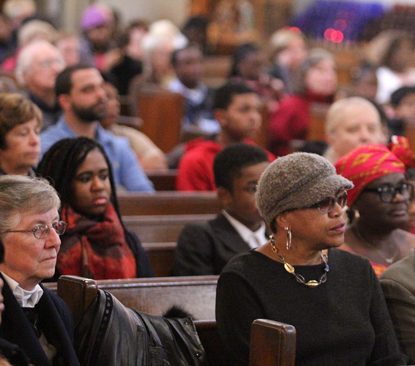 Charles Bradford, a member of Blessed Virgin Mary Parish in Darby, is also the Grand Knight of Msgr. Vincent B. Gallagher Council, Knights of Columbus.

The scandal “hasn’t affected my faith at all, we are all human beings,” he said. “We all make mistakes, nobody is perfect. What the priests have done is a scandal but by the same token the priest is no more than a vessel when we celebrate Mass. I think the church is going in the right direction as far as investigation of the priests. If the priests are found guilty they should be defrocked.”

Identical twins Elizabeth and Kimberly Feeney are recent graduates of the University of Pennsylvania where they were active members of the campus Newman Center. They are now starting at Thomas Jefferson University where Kimberly is in the Medical School and Elizabeth in the School of Nursing. Generally they worship at St. Katherine of Siena Parish in Northeast Philadelphia where their mother is a member.

“The scandal hasn’t affected me and it hasn’t affected most of my close friends. They would say if it did,” Kimberly said. “I think for some, this has weakened their faith but they will come back. Others might not have had the good experience we had and might not.”

Elizabeth suggests church leaders “should recommit themselves as servants and hold themselves to the standards that God has set for them, to be leaders and role models in their actions. They should do this not only by living morally themselves but by not participating in a cover-up and also by cooperating with the government. Only by doing that can we show the public that the church cares.

“Steps have been taken in recent years,” she said. “I know the church has made many changes to assure that it does not happen again.”

Phil Duffy, a member of St. Maximilian Kolbe Parish in West Chester and a regular commentator on WFYL radio, said, “The church will take a hit on both membership and contributions because of the scandal but the faith will come out of this and move on a more solid foundation. I do believe you have to look closely at the members of the hierarchy who covered things up. The number-one role of the bishops is to protect the flock and that did not happen.”

The present difficulties come out of the “anything goes attitudes of the 1960s and 1970s,” he said. “There was a kind of abandonment of any kind of virtuous foundation. (I) think we have to take a very hard look at the political abuse. The sexual abuse gets all of the attention. I see political abuse by the bishops especially in the document ‘Forming Consciences for Faithful Citizenship.’”

If this suggests he is an ultra-conservative, Duffy demurs. “I am a classical liberal but not in the modern sense,” he said. 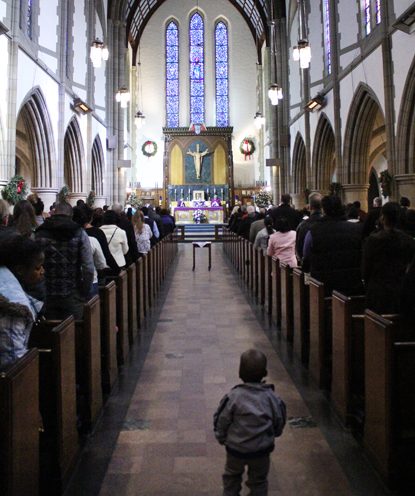 Helen Graci, a member of Blessed Virgin Mary Parish in Darby, said the scandal “has upset me but it hasn’t affected my faith. But it is has affected the faith of some people I know who have decided to walk away from the church. I’m still hanging in.

“It’s sad,” she said. “The church has been a treasure to me all my life. It is painful — painful for the victims and painful for me as a parent who wonders what effect it will have on my children and grandchildren.

“It is painful for the men and women who have dedicated their lives to the church. Personally, I have been blessed by the goodness and example they have set for me and others. I am sorry for the sadness they endure, and I see the sacrifices they have made for me and for others.”

“My faith doesn’t rest on actual human beings, it is based on Jesus Christ, and it reverts back to him,” said Barbara Inforzata, a long-time member of St. Thomas Aquinas Parish in South Philadelphia and vice principal at St. Monica School.

“They have to acknowledge the sin and the fact that they did wrong. Penance is absolutely necessary.

“We have background checks and safety measures but I don’t know if that is enough. No one should be alone with a child, but that is hard to enforce. I realize human beings are in control. Certainly people who were responsible should be removed and we should be on our guard so that it does not happen again.”

Wanda Nouel, a native of Honduras, has worshiped at Holy Innocents Church in Philadelphia for the past 12 years. “Priests are human beings, my faith is in Jesus Christ,” she said. “It all depends on how deep your faith is. Some of the people in the Pentecostal community are saying to our people, ‘How can you go to a Catholic Church when they have people like that?’

“We have to confront the situation, and those who did these things have to pay for what they did. I can’t believe what happened to the victims, we have to comfort them.”

Francis Reagoso, a member of St. Maximilian Kolbe Parish in West Chester, hasn’t been personally affected by the scandal, but he worries about the effect it has on his five children.

“My daughter had two children in Catholic school and pulled them out,” he said. “She told me she had to rethink her position on the Catholic Church. They still had a relationship with God, but were going to a different church. I talked to her last night and she and her husband and children came to the Catholic Church but at a different parish.

“I know we are losing people because of this,” Reagoso said. “I think we should open up the priesthood to married men because we are running out of priests. It is regretful that all of the wonderful priests we have known are embarrassed by this.

“Priests are people,” he said. “They are not saints, and some have done some pretty bad things. People used to think they walked on water. I’ve gotten to close to some priests as I’ve gotten older. You can’t blame all of them.”

As people in parishes of the archdiocese continue to discuss the scandal among themselves, they might take comfort in a Latin adage: Vox populi, vox Dei – the voice of the people is the voice of God.

NEXT: Casa del Carmen preschool kids are blessed for success