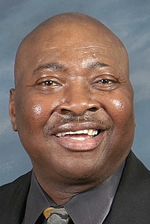 Isley shared his personal journey from sin to redemption in a short memoir entitled The Deacon’s Story: From the South to the North, published in 2007 and still available on Amazon.

Born in poverty in rural North Carolina, he was raised by loving and deeply religious Baptist grandparents. With 13 kids in the family, money was scarce, and he learned at an early age how back-breaking picking cotton can be. He fell in with a bad crowd, engaging in petty thievery and other actions that nearly resulted in prison.

Eventually, Isley joined the Great Migration and arrived in Philadelphia hoping to make his fortune. But here too he appeared headed for a life of crime — thievery, illegal gambling, dabbling in drugs, loan sharking. At one point he was living on the streets.

Ultimately he had a falling out with his companions in crime. With a rumored hit against him, he fled to a new neighborhood, driven by the fear of God. He resolved to turn  his life around, and in this he was clearly helped by his young wife, Carmen Copper, who well may have been God’s instrument in her husband’s redemption.

Carmen recalled that she was still a teen when they met. She and a friend were walking home from school by a different route one day to avoid rowdies, and there she first saw Isley, sitting on the sidewalk having his beautiful long hair braided. For her, it was love at first sight — but it took a little longer for Isley, perhaps because she was much younger than he. But they eventually married, and for Carmen, who described him as the first and only love of her life, “there will never be another man.”

The couple opened a little steak shop and variety store near 12th and Erie Streets in Philadelphia. Isley delighted customers with the peanuts he roasted daily in an antique roaster.

While living near the former St. Stephen Church, they were introduced to Catholicism by friends. Both were received into the church along with their son, Demetrius, now an Army major serving in Iraq.

Once becoming Catholic, Isley put his who heart and soul into the faith, according to his wife. She recalled his great love for Jesus and for the Blessed Mother, and how he would pray the rosary at 3:00 a.m. for those in need.

After completing the permanent diaconate program, Isley was ordained by Cardinal Anthony Bevilacqua on June 10, 2001 for service at the former Immaculate Conception Parish in the Germantown section of Philadelphia. In 2011, he was reassigned to St. Helena. In addition to parish work, Isley also participated in various volunteer outreach programs including chaplain at Graterford Prison.

The viewing for Deacon Isley took place at St. Helena  Church on Tuesday, Sept. 4 followed by his funeral Mass, at which Archbishop Charles J. Chaput was the principal celebrant. Msgr. Joseph Trinh was among the concelebrants, assisted by Deacon James Mahoney, who was also the homilist.

In addition to his wife and son, Deacon Isley is survived by four grandchildren: Destiny, Jalen, Demetria and Desire’a.