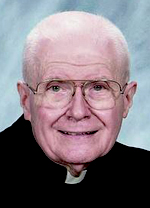 Born in Philadelphia the son of the late Clement Stec and the late Mary (Kijak) Stec, he attended St. Adalbert School in Philadelphia and Northeast Catholic High School before entering St. Charles Borromeo Seminary. He later had further studies at Villanova University.

He taught Latin at Cardinal Dougherty High School for 37 years and for much of that time resided at his childhood parish, St. Adalbert. In 1994 he was named pastor of St. Hedwig where he served until his retirement in 2000.

Father Joseph Zingaro recalls before he entered St. Charles Seminary he had to take a summer course in Latin at the former St. John the Evangelist School in Philadelphia, which was taught by Father Stec, and he would usually mix humor with this teaching. “What is agricola?” he might ask, and answering his own question, Agricola is a farmer; a farmer is a person who is out standing in his own field.”

Later, at St. Charles Seminary, Father Zingaro, who is part Polish by heritage, would encounter Father Stec again. Father Stec would come out to the seminary to tutor students like him who were interested in future Polish ministry.
“He would come out by train and walk to the seminary,” Father Zingaro said. “Even if I was the only student that day he would come anyway. He would also assist priests or deacons who had to preach in Polish in the preparation of their homilies.”

Msgr. Francis Schmidt, a seminary classmate and lifelong friend of Father Stec, recalls his Latin course at Cardinal Dougherty was surprisingly popular, especially among the athletes. He had the reputation of being very generous with grades, and not many would flunk his course and be ineligible to play their sport. “He wanted kids to take it,” Msgr. Schmidt said.

Michael Blihasz, the president of Philadelphia’s Polish American Cultural Center, recalls Father Stec’s fluency in his ancestral language was such that even people born in Poland would consult him on linguistic matters.

“He was taught to be very concerned about immigrants,” Blihasz said. “His mother and others like her knew the hardship of coming to America and starting from scratch. He was always kin and courteous to groups like ours.”

There will be a viewing for Father Stec at St. Francis Center for Healthcare and Rehabilitation in Darby on Tuesday, Sept. 25. This will be followed by his 11 a.m. funeral Mass celebrated by Archbishop Charles J. Chaput.

Among the concelebrants will be Msgrs. Paul Curran, Msgr. Schmidt, Father Edward Kuczynski and Father Zingaro, who will be the homilist.

Interment will be at Most Holy Redeemer Cemetery, Philadelphia.

NEXT: Father Daniel Cavanaugh, 81, dies; had devotion to Mary