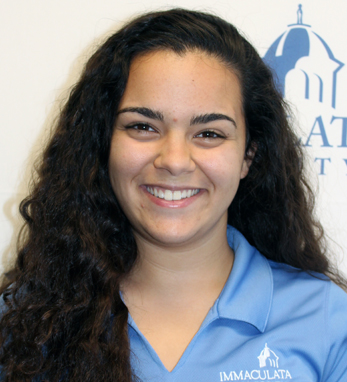 While the Philadelphia Eagles were busy clinching the Super Bowl title earlier this year, Maria Pisano sat at a table just outside a college cafeteria in which students were watching the landmark game.

Pisano was sharing information about human trafficking with her classmates at Immaculata University, where she serves as president of the school’s Catholic Relief Services (CRS) chapter. Pisano and a group of friends had formed the campus CRS chapter the previous year.

“Super Bowl weekend is a very high weekend for human trafficking,” she said.

After a passing student admitted not knowing anything about the topic, Pisano realized she was in the right place at the right time.

“God needed me to tell people about this issue, to light their spark,” she said.

That same fire burns when Pisano, now entering into her senior year at Immaculata, discusses “Crown of Creation,” a women’s prayer group she helped found. Originally a sporadic gathering, the sixty-member organization now meets regularly to explore the work of St. John Paul II and his “theology of the body.”

Pisano is enthusiastic about the late pontiff’s teachings on human sexuality, which inform Crown of Creation’s aim to provide a safe, empowering place for women to discuss their faith and to discover the beauty of their femininity.

“Chastity has this negative connotation, and to learn and accept that it really is beautiful and special — that is amazing,” said Pisano.

Yet this self-described daughter of “cradle Catholics” has also struggled with moments of intense doubt.

“I ran into a little hostility toward Catholics and the Catholic faith,” she said. “I realized that in order to defend my faith I had to know my faith. That led me to asking more questions.”

During this process, Pisano also had to confront history lessons that exposed periods of schism and hypocrisy in the church.

“That was quite upsetting,” she said. “It definitely caused me to question my faith.”

Pisano recalled a particular instance where she was ready to abandon her beliefs.

“I remember looking out my bedroom window telling myself there is no God,” she said. “Then the world turned gray, and just for a split second I wasn’t able to see color. There was no life left in the world.”

In Pisano’s dark night of the soul, memories of reading evening prayers with her father served as a beacon that led her to a renewed and deepened faith.

Pisano credits her parents with both instilling faith and modeling how to embrace it as hers.

“They’re incredible,” she said. “They’re cradle Catholics, but each had their own moment of actually choosing their faith, which makes it special.”

As she prepares to graduate from Immaculata in 2019 with a degree in communications, Pisano plans to continue her spiritual and social outreach. Prayer services, educational movie nights, presentations on refugees, and petitioning lawmakers to defend the marginalized are all part of her busy academic year schedule.

Pisano was recently awarded the St. Catherine of Alexandria medal by Immaculata University in recognition of “wisdom, fortitude and Christian service.”

Currently considering a year in the mission field after graduation, Pisano is also discerning a call to become a Sister of Life.

“Meeting the sisters was a wonderful experience,” she said. “I have never met more joyous people.”

With its many possibilities, the path ahead is not yet fully clear to Pisano, but as she looks to the future, she recalls the advice her grandmother often gave her as a child.

PREVIOUS: Banking, nonprofit expert ready to roll up sleeves at Faith in Future

NEXT: What a person of faith looks like: At 100, she values God and family most