Ecumenism puts the body of Christ to work for the world 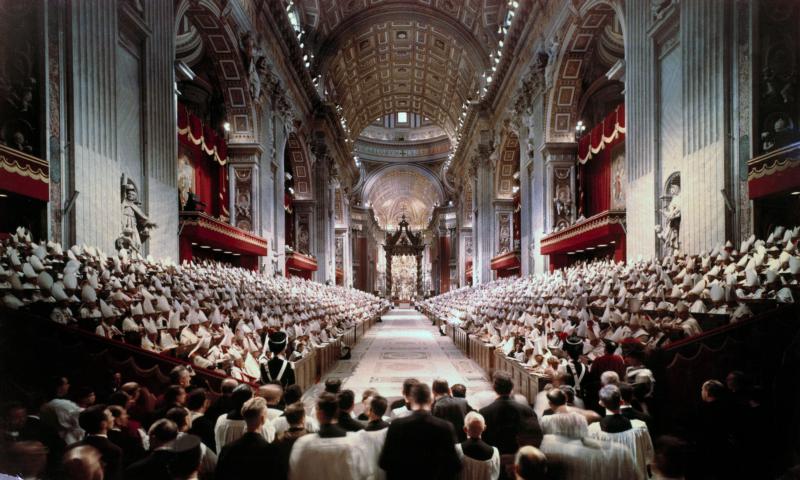 Pope John XXIII leads the opening session of the Second Vatican Council in St. Peter’s Basilica at the Vatican in 1962. The promulgation of the 1964 Decree on Ecumenism, “Unitatis Redintegratio,” at the Second Vatican Council made it acceptable for Catholics to engage with Christians from different denominational backgrounds in order to share a common witness to the world. (CNS photo/Giancarlo Giuliani, Catholic Press Photo)

The promulgation of the Decree on Ecumenism, “Unitatis Redintegratio,” at the Second Vatican Council made it acceptable for Catholics to engage with Christians from different denominational backgrounds in order to share a common witness to the world.

Of the multiple forms of dialogue, acts of service are a visible and tangible way for Christians of all varieties and positions to love their neighbor and witness to their faith in Jesus Christ. For laypeople and clergy alike, it is our common baptism that drives us to answer Jesus’ prayer at the Last Supper, “that they all may be one” (Jn 17:21).

I’ve had many ecumenical experiences in my life, but the most influential ecumenical engagement I had was during my year of service. I didn’t know it at the time, but the experience had a direct impact upon my vocation to practice ecumenical and interreligious dialogue, and steer the course of my theological studies.

Between undergraduate and graduate school, I spent a year in the mountains of eastern Kentucky, serving with Christian Appalachian Project (CAP), an interdenominational Christian organization begun by Msgr. Ralph Beiting, priest of the Diocese of Lexington, in 1964 (coincidentally the same year that Pope Paul VI promulgated “Unitatis Redintegratio “).

CAP provides services to people experiencing poverty that range from housing repairs and various family services, to preschools and programs for the elderly. Msgr. Beiting welcomed Christians from many backgrounds to CAP — the only thing needed was a servant’s heart.

It is not a requirement to be Christian to volunteer with CAP, although it is usually faith in Christ that leads people of diverse ages and backgrounds to work and volunteer at CAP. The organization doesn’t necessarily root its self-understanding within Christ’s prayer “that they all may be one.” Nonetheless, it actively engages in ecumenical service and community, and in doing so, builds up the body of Christ.

Observing and learning about the faith of other volunteers and staff during my time of service strengthened my relationship with Christ and my commitment to my Catholic faith.

It was also this experience of ecumenical service that contributed to my curiosity and study of the Catholic theology and practice of dialogue.

Engaging with other Christians, listening to their faith journeys, gleaning a fuller understanding of their commitment to Christ and to service of others echoed my own views and motivations for choosing to commit to a year of service at a religiously affiliated organization, and reaffirmed my Christian identity.

Pope Francis has made answering this prayer a prime objective of his pontificate. He has met with and signed statements with leaders of Orthodox and Protestant denominations.

Though this kind of theological and ecclesiastical ecumenical engagement is different from what we consider a traditional act of service, Pope Francis sets an example for the Catholic faithful as to the necessity of ecumenical engagement at all levels — local, national and international. His hospitality and openness toward his Christian counterparts models how Catholics are called to ecumenical relationship.

The Catholic Church has the unique privilege of being spread across the globe, in almost every corner of the world. It places the church in a position to participate in acts of service with many types of Christians at the local level, and the local church communities bring the fruits of that engagement to the larger church.

One of these fruits is the knowledge that Catholics are not alone in responding to the divine call of building up the kingdom of God. We are blessed by the gift of friendship of our Christian sisters and brothers. This friendship is the foundation upon which Christians can live out their mutual faith commitments to service of those on the margins of society.

McStravog is a doctoral student of theology at La Salle University in Philadelphia. She is a former staff member of the Secretariat for Ecumenical and Interreligious Affairs at the U.S. Conference of Catholic Bishops. She currently lives and works in Washington.

PREVIOUS: In liturgy, Jesus gives insight to our blindness, and we follow

NEXT: The long, steady journey to Christian unity