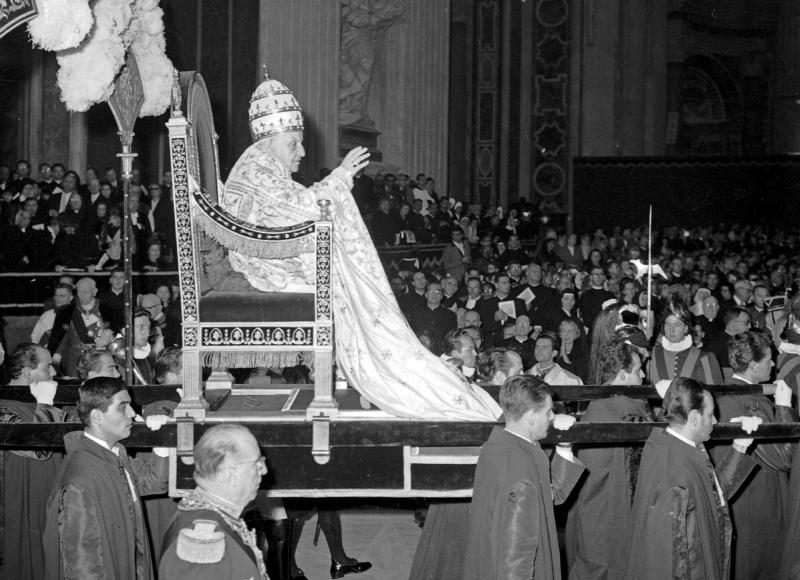 Pope John XXIII leads the opening session of the Second Vatican Council in St. Peter’s Basilica Oct. 11, 1962. One of his purposes for the council was the pursuit of Christian unity. Protestant, Orthodox and Anglican observers were invited to the four sessions of the council (1962-65). (CNS photo/L’Osservatore Romano)

Our search for Christian unity commenced over a century ago. The World Missionary Conference in 1910 is generally considered its beginning. Protestant and Anglican representatives gathered in Edinburgh, Scotland, to discuss missions. Their problem, which is still our problem today, is the question of ordinary people: How can Christianity be the true faith if it has so many competing voices?

A long letter of support for the conference from Bishop Geremia Bonomelli (1831-1914), of Cremona, Italy, was read in its entirety to the whole assembly. His was a Catholic presence at the beginning of the ecumenical movement.

In January 1959, Pope John XXIII announced the Second Vatican Council. One of his purposes for the council was the pursuit of Christian unity. Protestant, Orthodox and Anglican observers were invited to the four sessions of the council (1962-65). It is noteworthy that Angelo Roncalli (later Pope John XXIII) was one of the young priest friends of Bishop Bonomelli. The Holy Spirit can work in unexpected ways.

The teaching of the Second Vatican Council on ecumenism is found primarily in the 1964 Decree on Ecumenism, “Unitatis Redintegratio,” though there are sections on ecumenism in other important council documents such as the Dogmatic Constitution on the Church, “Lumen Gentium,” No. 15.

The 1995 encyclical of St. John Paul II on Christian unity, usually referred to by its Latin title, “Ut Unum Sint,” develops the teaching of the council in detail. These documents and many others, including the 1993 ecumenical directory that considers many practical matters, can be found on the Vatican website.

There is widespread collaboration in performing the works of mercy in the United States and elsewhere. Local food pantries, for example, are often supported and staffed by ecumenical groups of churches. Working together makes sense as it multiplies resources and provides more effective aid to those in need.

At a 2016 ceremony attended by Pope Francis and Bishop Munib Younan, president of the Lutheran World Federation, the directors of the Lutheran and Catholic international relief organizations committed themselves to increasing their work together.

A second example of collaboration is the meetings of local pastors. In some parts of this country, pastors gather regularly to discuss the Scriptures for the following Sunday, to share “best practices” about pastoral cases, and to reflect on administrative conundrums. At the parish level, there are many common concerns.

A key dimension of pastoral collaboration is common witness to the faith. Most striking is the common witness of martyrs for Christian faith. Persecutors see Christians as more alike than different.

Even before the Second Vatican Council, there were conversations taking place about our theological differences. The Catholic Conference for Ecumenical Questions was begun in Europe in 1952 by then-Msgr. Willebrands.

Since the council, numerous formal theological dialogues with other Christians have been sponsored by Catholic bishops’ conferences and by the Vatican. These dialogues are characterized by mutual respect, honesty and friendship. The bishops of the United States sponsor eight such dialogues.

The dialogues put into practice the principles enunciated at the council. These include: seeking together the guidance of the Holy Spirit; being truthful about one another; recognizing that we are joined by baptism and already in “imperfect communion” with one another; seeking deeper understanding of each other; and realizing that the Holy Spirit graces our Christian colleagues and we can learn from them (Decree on Ecumenism, No. 4).

The positive results of these theological dialogues are not widely known but are quite positive. The 1999 international agreed statement of the Catholic Church and the Lutheran World Federation — the “Joint Declaration on the Doctrine of Justification” — is one such result. The World Methodist Council, the World Communion of Reformed Churches and the Anglican Communion have all endorsed this statement on a central issue of the Reformation.

I have found that “ordinary Catholics and Protestants” are surprised when they learn how far we have come in these dialogues.

The ecumenical movement is currently experiencing a new springtime. Recent theological agreements bring hope. Pope Francis and other leaders call us to work together with other Christians for the poor on the peripheries of society. We will learn much for ourselves and for unity from this pastoral work and the impact it has on our spiritual lives.

It seems to me that the recent “winter” of ecumenism was necessary. Our ecumenical collaboration raises questions. Those of us who have made our faith and our faith community — Catholic, Methodist, Lutheran, etc. — central to our lives needed to ask questions. What is our identity as Christians? Where do our fears of unity come from? Should what I need personally be a determining factor for the faith of the community?

Change is a reality. All the individual Christian communities continue to change.

The one necessary ecumenical change is deeper conversion to Christ. This grace is a gift of the Holy Spirit.

Father John Crossin is an Oblate of St. Francis de Sales. He is a consultor to the Pontifical Council for Promoting Christian Unity.

PREVIOUS: Ecumenism puts the body of Christ to work for the world

NEXT: Building up the body of Christ through ecumenism