Next Encuentro phase is action by parishes, dioceses on ideas, priorities 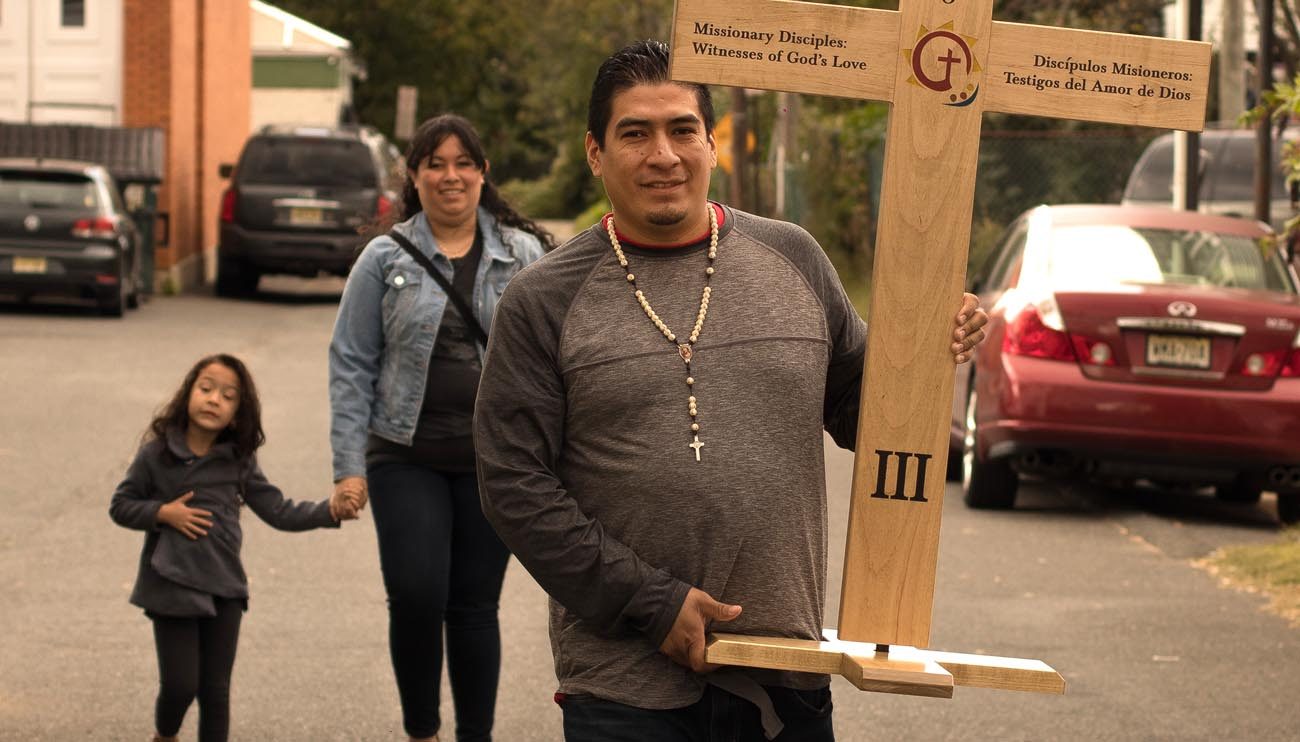 The Chavez-Ruano family of St. Joseph Parish in Trenton, N.J., is seen in late September taking the Region 3 encuentro cross to the Holy Trinity Church gymnasium of Christ the King Parish in Long Branch, N.J. Region 3 includes the archdioceses and dioceses of New Jersey and Pennsylvania. (CNS photo/Kyle Plumstead)

WASHINGTON (CNS) — Nearly 3,000 Hispanic ministry leaders, like Dominican Sister Judith Maldonado, have gone back to their parishes and dioceses to share the ideas and fruits of the conversations that took place at the Fifth National Encuentro in Grapevine, Texas.

And as that phase of the multiyear process reached completion, the next phase is aimed at putting into practice the lessons learned and bear fruits.

“This has been like a retreat, the message that we were given at the end is like you have the Holy Spirit, you have to take it with you and you have to be saints, produce fruits of love,” said Sister Maldonado, a member of the Dominican Sisters of the Lady of the Rosary of Fatima. Her order is involved with family ministry serving parishes in Maryland and Texas.

In the next few months, the leadership team of the Fifth National Encuentro, or V Encuentro, will distribute a concluding document listing the main priorities and problems identified across 28 ministry areas; the document will assist dioceses, parishes and national structures in drafting their own pastoral plans according to their own realities and priorities.

The Encuentro’s team of accompaniment, or ENAVE, plans to continue providing support and tracking progress.

“We have achieved things that in some ways we never would have imagined would be possible,” Ken Johnson-Mondragon, V Encuentro’s director of research, told Catholic News Service. “Walls have come down, people have experienced really the joy that Pope Francis talks about.”

The V Encuentro process that began about four years ago has helped thousands of Hispanic ministry leaders engage in faith-filled dialogues among themselves and reach out to those on peripheries. Encuentro has also promoted collaborations within and across dioceses, which is known as ‘pastoral en conjunto,’ and has helped remove the “fear to speak up,” bringing the participants closer to their pastors and bishops, added Johnson-Mondragon.

The V Encuentro also identified and prepared at least 25,000 new Hispanic ministry leaders across the country, and about a third of the leaders engaged were youth and young adults. An estimated 100,000 individuals participated in the process and about 150,000 others were reached on the peripheries.

Another important gain is that the V Encuentro has captured the attention and support of the bishops nationwide. At the gathering, about 125 bishops — Hispanic and non-Hispanic — walked side by side with their diocesan delegations, and about 160 out of 178 Roman Catholic dioceses and archdioceses in the country were represented.

“The Hispanic church is asking for formation, they’re asking for support, they’re asking for direction, so it will be on the part of the bishops and pastors to provide that,” Bishop Oscar Cantu told CNS. Formerly head of the Diocese of Las Cruces, New Mexico, he is now coadjutor bishop of San Jose, California.

What mostly surprised and pleased Bishop Cantu was the size of the gathering — with over 3,000 participants — and like many others, he was energized by the optimism and drive of the attendees.

The top three recommendations that rose up in the Encuentro process are: the need to develop pastoral plans for Hispanic ministry tailored according to the needs of each parish and diocese; the need of the parish community to help strengthen families; and to hire more Hispanic young adults in paid positions of leadership.

The 28 ministry areas addressed by the V Encuentro include those that reach out to youth, young adult, college campuses, immigrants, families, people with disabilities, and the incarcerated, as well as ministries in vocations, pro-life, faith formation and catechesis, justice and peace, and even care for the environment among others.

As a word of advice from Mercy Sister Ana Maria Pineda, who has witnessed all the Encuentros, it is important to connect the previous Encuentros to the current one, while staying focused on the work at hand amid the challenges it might present.

“We’re being called to a very special moment in time and we need to step up to the plate to make sure that we are on the side of the poor, on the side of those who can’t protect themselves.” Sister Pineda said.

NEXT: U.S. church urged to fight racism with same zeal waged for pro-life cause