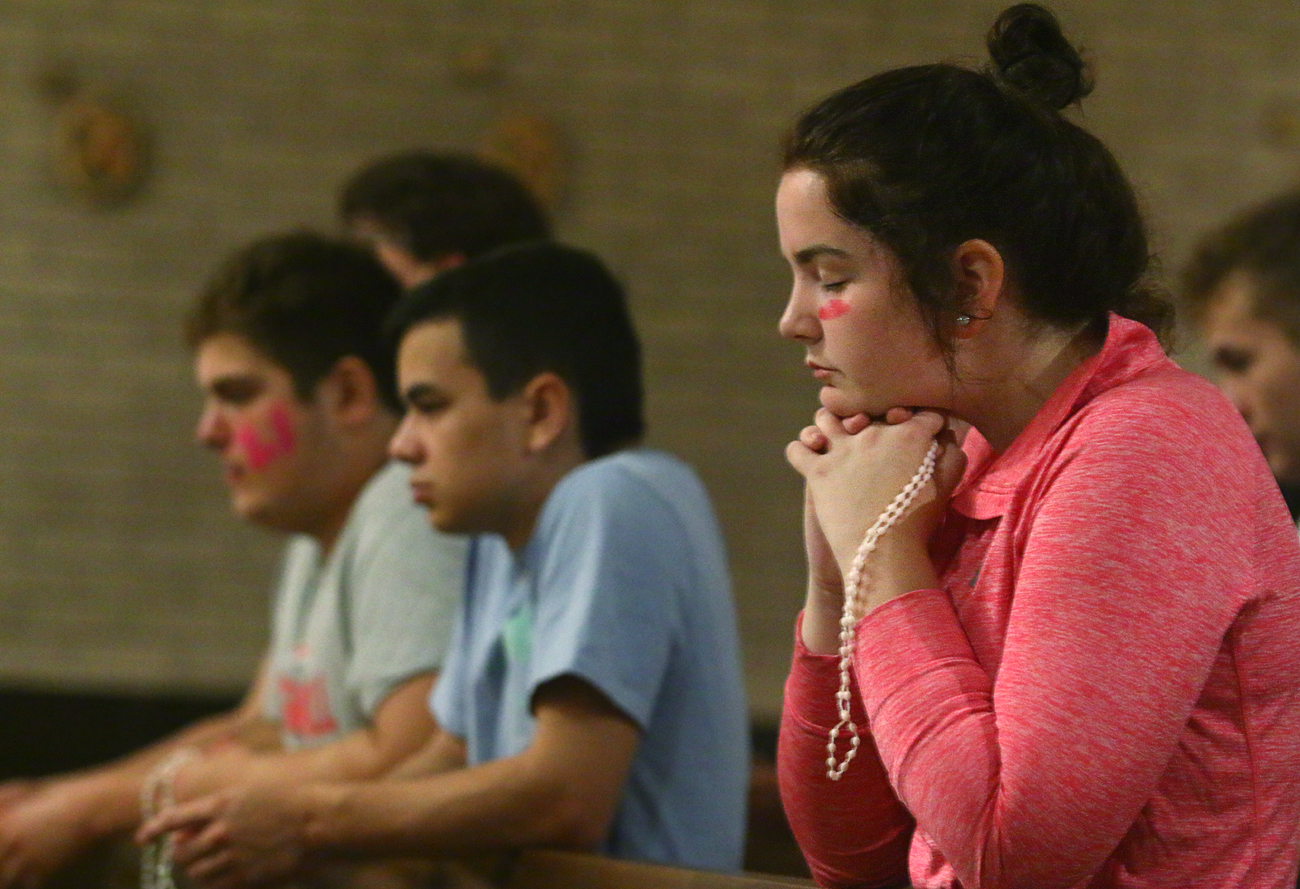 Looking around in church on Sunday at the sea of graying (or balding) heads, it’s easy to get the impression that the religion of the next generation is the “Secular Church of Me.”

Take Archbishop John Carroll High in Radnor, where every other Tuesday evening, students meet in the school chapel as part of the Genesis program.

The weekly sessions of worship, praise and faith sharing serve in part as a follow-up to the school’s annual Kairos retreat, a popular spiritual tradition descended from Jesuit spirituality and developed in the Brooklyn Diocese around 1965.

Father Speziale agreed, but on one condition.

“I told them they had to take ownership of the program,” he said. “Even down to naming it.”

The students did just that, selecting the word “genesis” to signify a new beginning in a deeper relationship with God.

Participation in the program is voluntary and open to all grades, regardless of whether students have previously attended a Kairos retreat. The evening opens with a period of eucharistic adoration, brief interludes of contemporary Christian music and a shortened Benediction service led by Father Speziale, who is also available for confessions. The rest of the program is taken over mostly by the students themselves under a predetermined leader chosen for the evening, with discussion of a different topic each meeting.

On Tuesday, Oct. 2, more than 30 students were on hand, slightly less than usual due to other campus activities, including sports events. During the summer months, weekly Genesis meetings continued, with attendance reaching as many as 100.

(View a photo gallery of a recent Genesis program gathering.)

After prayer and worship, students relax and catch up over snacks. The hospitality is also part of the program’s goal of “building Christian relationships and a new relationship with God,” Father Speziale explained.

“It’s about finding God and finding God in others,” he added. “There is both a spiritual and social dimension.”

Some alumni who graduated from Carroll and are now in college have continued to attend the Genesis gatherings during the summer months, and many also plan to do so during Thanksgiving and Christmas breaks.

Father Speziale noted that other high schools, such as Lansdale Catholic, offer similar programs that have experienced strong support from seniors and recent alumni. While he and his students initially visited Lansdale’s gatherings to trade notes, Father Speziale said that Genesis is designed to engage not only seniors, but students at all levels as both participants and leaders.

“Everybody needs Jesus,” he said. “The Holy Spirit guides us; it is unbelievable.”

On Oct. 2, the Genesis gathering was led by senior Kevin Cone, a member of the football team. His chosen topic focused on personal challenges, and the process of facing and overcoming them. One by one, about ten students gave witness to their own struggles — not fitting in socially, losing a good friend, experiencing difficult family relationships or losses — all of which may be magnified in one’s teen years. Each testimony was punctuated by prayer and encouragement from the group as a whole. The evening ended with small group discussions.

Chris Anderson, who recently graduated and now works full-time in preparation for his upcoming studies in secondary education at Neumann University, felt sustained by the weekly gatherings.

“I came back because this is growing the faith in a moderate way, with Father Speziale giving reflections,” he said. “Through all my years at Carroll I’ve grown spiritually.”

Alexa Tarasca, a junior, said Genesis has given her an incredible outlook of people she never thought she would be able to talk to.

“I just feel I can open up to anyone here and it is a great support,” she said. “It’s a place to come to strengthen your faith even if you can’t get to Mass on Sunday. My faith has always been there but Genesis has definitely strengthened it.”

Brianna O’Donnell, a senior, said that her family has always been religious and her faith was always firm, but that Genesis “made me realize faith is not just between you and God. Having friends with you can take that to a whole new level.”

Jess Flores, a sophomore, found that Genesis strengthened her faith in ways beyond those offered by or theology classes.

“Its finding people who share your love for God and that’s not easy in school,” she said. “You know you are not alone. On days when I’ve felt most alone, I’m able to work through it with Genesis. When I come here it all goes away and I feel completely different.”

Julia Staface, a senior, explained that Genesis allowed her a place in which suffering and imperfection could be viewed as opportunities to encounter God’s grace.

“It gives you time to think about how people have struggles, and how they are saved by their faith. You see people you think are perfect and this gives you a different perspective,” she explained. “Genesis gives you a time to think that Jesus is really there for you when you struggle.”

Staface added that she herself recently proved that in her own life.

“Last year I had struggles and I started to get back into my faith,” she said. “I feel much closer to God and knowing the other people here gave me a new perspective; knowing no one is alone.”