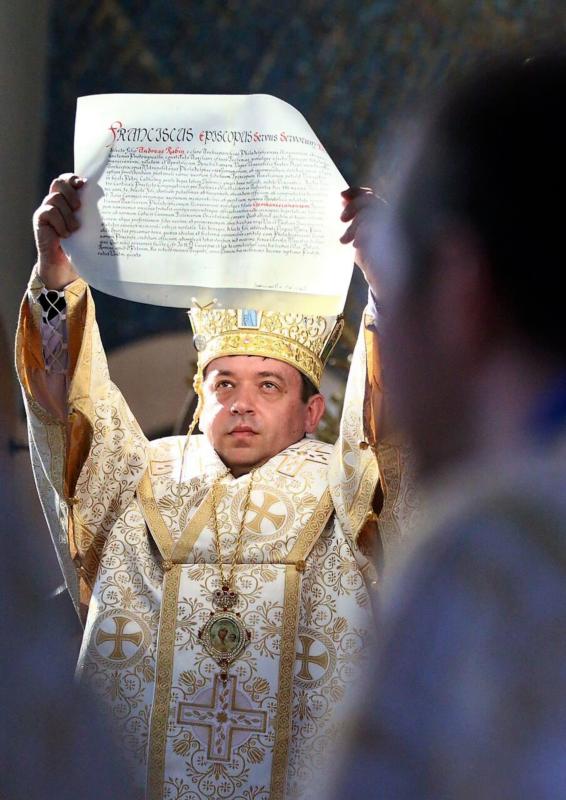 PHILADELPHIA (CNS) — Saying that the sexual abuse of children and adults by Catholic clergy “never should have happened,” the apostolic administrator of the Ukrainian Catholic Archeparchy of Philadelphia told Catholics he would cooperate with a Pennsylvania grand jury’s continuing inquiry into such offenses.

Auxiliary Bishop Andriy Rabiy said in a three-page open letter dated Oct. 10 that the archeparchy had “not had an incident or allegation made against our clergy.”

“This is not to be proud that we are better than others,” Bishop Rabiy wrote. “It is a time to reflect and to be grateful.”

He invited parishioners to report any alleged incidents of abuse of which they are aware.

In response to a grand jury subpoena, Bishop Rabiy said files from the archeparchy would be shared at a court hearing Oct. 24 “as requested and with no exceptions.”

“The archeparchy and I will fully cooperate with the law enforcement agencies,” he added.

The bishop also reflected on the impact of a Pennsylvania grand report issued Aug. 14 that detailed allegations of sexual abuse of children by priests and other church workers over a 70-year period starting in 1947 in six of the state’s Latin-rite dioceses. The report included claims that church officials had tried to hide some allegations and brushed aside victims.

The report linked more than 300 priests and church workers to abuse claims and identified more than 1,000 victims.

Bishop Rabiy called the widespread abuse “a cancer or virus,” saying that the way some clergy handled abuse allegations “goes deeper” than the committing of sin or mistakes being made. He cited the Book of Psalms in decrying abuse.

“The sex abuse that occurred is, as the psalmist said,” sin, the bishop said, writing: “‘Sin directs the heart of the wicked man his eyes are closed to the fear of God. For he lives with delusion: His guilt will not be known and hated.'”

He explained that the Catholic Church has two natures, like Jesus: human and divine.

“There is the human nature that involves the day-to-day interaction of human lives which the church has been commission to bring to salvation,” the bishop wrote. “This nature is what failed the people of God. Instead of living a life directed to do the will of God, those in positions of authority took it upon themselves to perpetuate the abuse rather than seek to root out the evil that it is.”

Bishop Rabiy encouraged parishioners to look to the church’s divine nature for hope.

“In spite of our human nature, God is there, first weeping that his dear children are in such agony. Only God can understand what they are going through,” the letter said.

“Second, God is willing to comfort those who were abused and us who are trying to understand why this happened. As difficult as it may seem, God wants to embrace us, to heal us and to cry with us. It is understandable that some may not trust God now because of what successors of his apostles (bishops) and clergy imposed upon them and us,” he continued.

“It is not God who has done this. It is the men who, as wolves in sheep clothing, preyed upon those whom God loves. If anything, God is justly angry. So, if God can be angry, we have every right to be angry also,” Bishop Rabiy added.

He said the divine nature of the church calls for its members “to weed out the evil in our midst.”

The bishop also pointed out that the Catholic Church in the U.S. and in Pennsylvania in particular “has undertaken significant measures to insure the past not be repeated again,” adding that the grand jury report is about past abuse claims. “The church is different today than it was in the recent past,” he emphasized.

The Pennsylvania Catholic Conference, the public policy arm of the state’s Catholic bishops, “is working diligently to provide for victims and to assist the dioceses and archeparchies so they are vigilant in meeting the needs of the faithful who have suffered,” Bishop Rabiy said.

“Procedures will be in place to hold bishops accountable to the same level as everyone else under the civil and church (canon) law, which was not present in the past. Cooperation with evil will not be tolerated again,” he said.

“There is no excuse to let someone abuse another and to let that continue with others if the abuser is moved. This will not happen in the Archeparchy of Philadelphia!” he added.

The letter concluded by asking for prayers for the archeparchy and the entire Catholic Church so that all its members may be “vigilant so no one may be abused or hurt in any manner.”

The territory covered by the Archeparchy of Philadelphia is eastern Pennsylvania, the District of Columbia and the states of Virginia, Maryland, Delaware and New Jersey.

Editor’s Note: The full text of Bishop Rabiy’s letter can be found here.

PREVIOUS: Prayer gatherings help teens find God in Eucharist and in each other