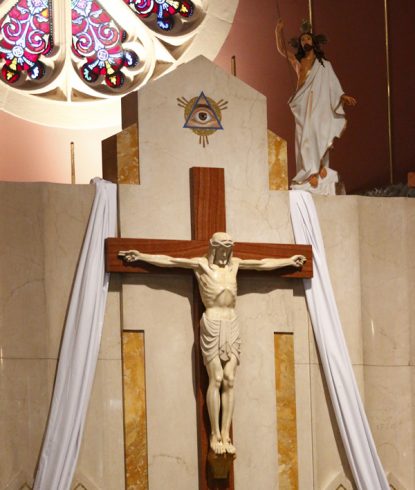 A crucifix is illuminated behind the main altar of St. David Church in Willow Grove. (file photo by Sarah Webb)

Parishioners of St. David’s in Willow Grove came together early this week to celebrate 100 years as a parish and consider the question of what will come next for their parish, the Archdiocese of Philadelphia and the Catholic Church as a whole.

In a time when the scandal of sexual abuse by some clergy and the failure of church leaders to address it has rocked the church and left the faithful seeking answers, the need for renewal is strikingly evident.

With that in mind, the parish invited Father Christopher Walsh, pastor of St. Raymond of Penafort Parish in Philadelphia, to lead a three-day period of reflection Oct. 14-16 to help people respond to the current times.

The first night began with a prayer, a reading from 1 Corinthians, and a story of a seaside town that once came together to respond with care to shipwrecks off the coast. The town, representing the church, ministered to these sailors in their time of need.

But as time passed and different organizations were founded to help the sailors, the townspeople withdrew from that duty. They turned their harbor into clubs and let their ships fall into disrepair. They became a social club rather than an emergency response organization.

The parallels with the church may not be immediately clear, but Father Walsh contended that many in the clergy have lost the first and most important duty of the church, to minister to the faithful. As a result, Catholics have lost their way in many aspects of the mission that Christ commanded. Nowhere is this more evident than in the abuse scandals the church faces today.

There was a moment on the first night, Oct. 14, where Father Walsh spoke a hard truth when discussing the feeling that church is scrutinized disproportionately as compared to other organizations.

Sobering words, but ones that clearly had an impact on those gathered.

“I didn’t know what to expect,” said James Henry of St. David Parish. “I came in just hoping to be rekindled, or understand what I need to be now. I was bowled over by both nights (Monday and Tuesday).”

The first night of the event focused on the pain inflicted on the faithful by the recent scandal. Those in attendance were invited to write down their feelings and offer them up to God as a way of confronting their deepest hurts regarding the scandal and asking him to help them heal.

They were also asked to express why they remained in the church after the horrible revelations of the crisis.

“Why not,” was the simple response from Patricia, a parishioner of St. David’s since 2001. “The church was established by God. It’s made up of human beings who aren’t perfect.”

She went on to express that the mistakes of the clergy do not change the character of the church or the teachings of Christ, adding at the end, “What else would we do? All we have is the church.”

The second evening centered on the opportunity the lay people have to effect change in the church. Father Walsh discussed the acts of several saints from church history, including St. Catherine of Siena. Herself a member of the laity, Catherine was instrumental in pushing forward reform and rededication to Christ in a time when the Catholic Church was torn to pieces by schism. Those times were not unlike ours, he suggested.

“We need healing,” said participant James Henry. “So many people have been hurt. Not just directly by the scandals, but by the shadows cast on our religion.

“It has to start with us,” he said, “maybe denying yourself of decadent pleasures and things, to make yourself aware of what’s going on in the world — and through acts done for the poor and needy.”

On the third night, Oct. 16, the congregation celebrated Mass together, listening to the Word and participating in the Eucharist as the church in Philadelphia has done for two centuries. Many in attendance were deeply touched by the experience and moved to do more service in the church.

“It helps the healing process through prayer and understanding,” Henry said. “Human nature is, you internalize it. The best thing you can do is discuss it, learn all the facts, and try to work through it. The only way you can do it is through understanding, help from others, and turning to the Lord.”

“It was very fulfilling,” she said, “but there’s only a handful of people here. The parish members are so great, although they don’t show (their) face. To have them all come out to something like this would be absolutely incredible.”

She also expressed her hope that the message they received over those three days might make its way into the rest of the church. That message, in the end, was twofold: A Catholic cannot hope to face the challenges of the future without being active in the church, and the church cannot overcome this scandal without its Catholic members; we must all be one in the Body of Christ.

NEXT: Eagles can teach us how to engage at Mass, says La Salle professor