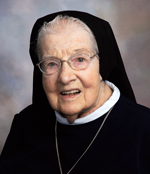 Sister Francis Joseph Loughran, I.H.M., died Sept. 30 in Camilla Hall, Immaculata, just shy of her 101st birthday. She entered her eternal reward in the 77th year of her religious life.

Sister Francis was born in Ireland on Nov. 18, 1917. She entered the Congregation of the Sisters, Servants of the Immaculate Heart of Mary on Oct. 2, 1941 from St. John the Baptist Parish in Manayunk.

Sister Francis taught children primarily in the Archdiocese of Philadelphia. Her final assignment was as an active participant in the Apostolate of Prayer which she rendered faithfully at Camilla Hall from Aug. 10, 2008 to the time of her death. She was a beloved and joyful Sister, Servant of the Immaculate Heart of Mary; may she rest in peace.

The funeral Mass was celebrated Oct. 4 at Camilla Hall. Father William E. Dean was the celebrant and homilist.  The local community at Camilla Hall along with friends Sister Francis made in the congregation over the years participated in her Mass and burial.

Sister Francis Joseph is survived by her sister Lucy Fritz and her sister-in-law Florence (Frank).