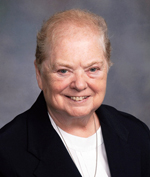 Born in Norristown, she entered the Congregation of the Sisters, Servants of the Immaculate Heart of Mary in 1956 from St. Patrick Parish, Norristown and professed her vows in 1958.

Sister Joan taught and was principal in elementary schools mainly in the Archdiocese of Philadelphia. She also served in the Diocese of Arlington in the early 1960s and in the Metuchen Diocese in the later 1960s. She served I.H.M. sisters as superior at Pacis Hall Convent before being assigned to Camilla Hall on Aug. 2, 2010 for her ministry in the Apostolate of Prayer.

In addition to her congregation, Sister Joan is survived by her sister Rosellen Smith.