Eagles can teach us how to engage at Mass, says La Salle professor 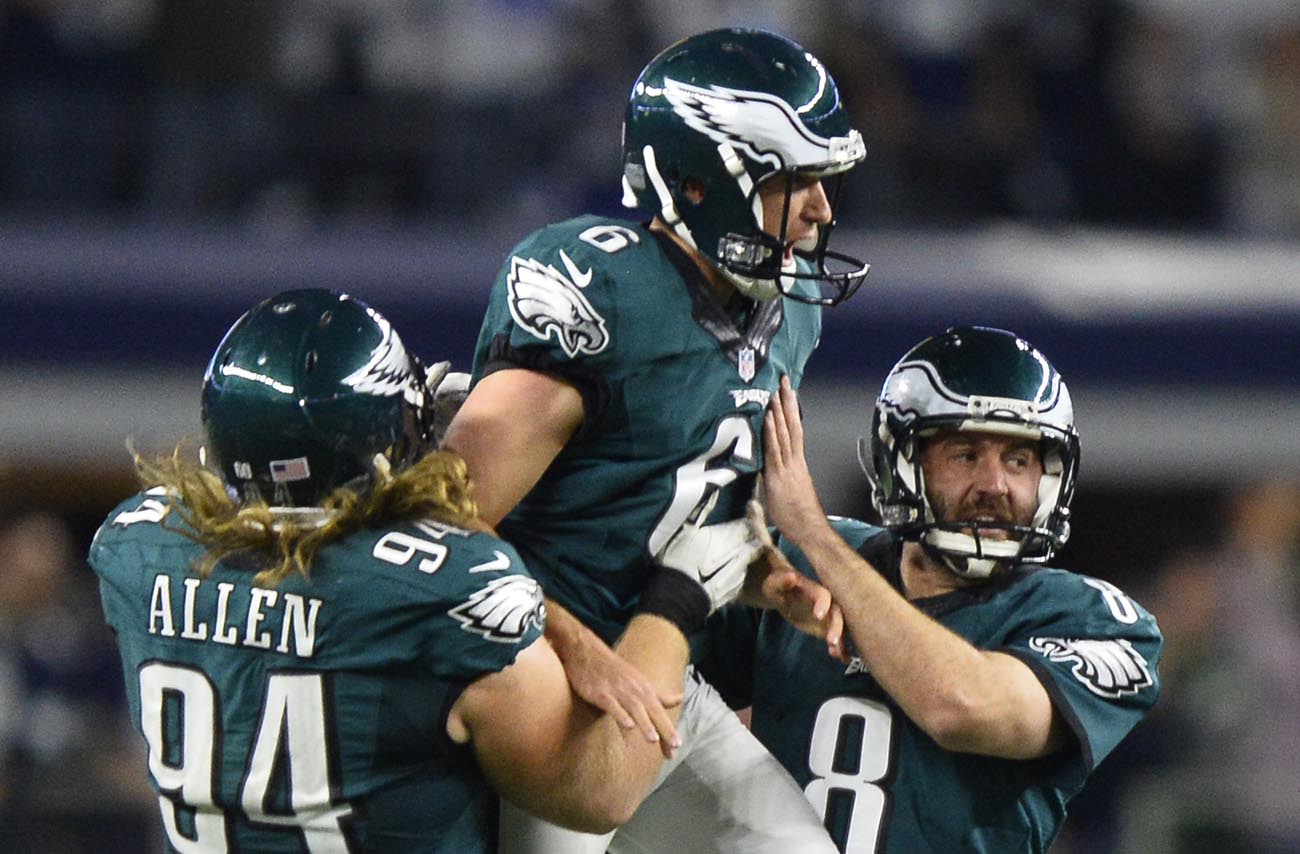 Can the Philadelphia Eagles teach us how to participate more fully in Sunday Mass?

During an Oct. 14 lecture at Archbishop Ryan High School, Father Berna outlined the parallels between sports and spirituality, adding that the 2018 Super Bowl champions exemplify how to lift up communal gatherings “on eagles’ wings.”

Sponsored by the Association of Church Musicians in Philadelphia (ACMP), the presentation drew more than 25 liturgical ministers and music directors, as well as several Archbishop Ryan students. The ACMP, which is a local chapter of the National Association of Pastoral Musicians, works with the archdiocesan Office for Divine Worship to foster the development of liturgical music.

Theologians and anthropologists (as well as athletes and advertisers) have long known that sports are more than just a Sunday pastime, said Father Berna.

In the 1970s, scholars such as Michael Novak began examining sports as a path to the sacred. Players’ experiences of being “in the zone” – that is, in a highly focused state of consciousness – have a mystical quality. The same is true of fans who lose an overall sense of time while watching a game, even if they’re eyeing the countdown clock.

(Listen to a podcast interview with Father Frank Berna on God and football.)

More recently, the Vatican initiated a global movement entitled Sports at the Service of Humanity, which promotes six key principles in sports at all levels: compassion, respect, love, enlightenment, balance and joy. Led by Cardinal Gianfranco Ravasi of the Pontifical Council for Culture, the movement held its first conference in 2016, and staged its second regional conference in June 2018 at Loyola Marymount University in Los Angeles.

Such acknowledgment of sports’ key role in everyday human experience are appropriate, said Father Berna. In addition to cultivating discipline and teamwork, sports serve as rituals that help us to confront our fears and to unite as communities.

And just as fans enter the stadium “knowing the story” of the team – its history, its traditions, its players – Catholics should enter the sanctuary with the same attitude of preparation for Mass.

“We need to play to win,” said Father Berna. “Do we believe Christ is present in the proclamation of the word, and in the Eucharist?” 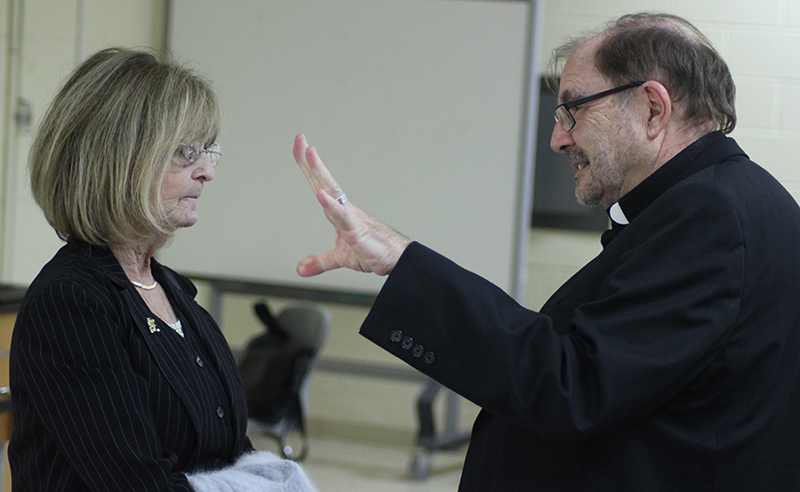 Helen Konstance, a cantor at St. Martha Parish in Philadelphia, speaks with Franciscan Father Frank Berna after his Oct. 14 lecture entitled “If Liturgy Were Like an Eagles Game.” Sponsored by the Association of Church Musicians in Philadelphia, the presentation surveyed strategies for increasing engagement at Sunday Mass. (Photo by Gina Christian.)

As with the Eagles, the triumph of the underdog over seemingly hopeless odds lies “at the heart of the Christian story,” Father Berna said, noting that Jesus hailed from a “backwater town” and entrusted his mission to a group of “unlikely disciples.”

In both sports and liturgy, the social dimension is vital. Religion is not simply “a private affair of me and Jesus,” but a call to live in communion with God and with one another in Christ, said Father Berna.

Liturgical preparations deserve the attention to detail marked by the well-choreographed Eagles’ Super Bowl victory parade. “Every note, every action was designed to evoke a certain response,” said Father Berna.

Music is central to ritual, whether it’s the national anthem, a team chant or a hymn, Father Berna said. Parishes should identify liturgical ministers who are called and sufficiently gifted for their roles, and ministry teams should meet regularly to assess what works and what doesn’t at Mass.

Patricia Gallo-Terrenzio, president of the ACMP, observed that congregations too often find themselves locked in “style wars” over liturgical music.

“Some like traditional hymns, some like contemporary,” said Gallo-Terrenzio, who also serves as music director at St. Christopher Parish in Philadelphia. “Some organists look down on guitars at Mass. There’s too much polarization in the pew.”

Emily Ehmann, a sophomore at Archbishop Ryan, said that she tended to respond better to more upbeat hymns.

“Songs that are mellow and quiet don’t make you really want to sing along,” said Ehmann. “But if they have more energy, you find yourself wanting to sing.”

Helen Konstance, a cantor at St. Martha Parish in Philadelphia, said that being attuned to the needs of the parish community is essential in liturgical ministry.

“You never know, when the people are coming, what burdens they have,” said Konstance, who holds a certificate in pastoral ministry from La Salle University. “They’re coming to be refreshed, renewed, healed. And you never realize how you touch somebody.”

At the same time, Father Berna said, liturgy — like a good sports game — should be an occasion for joy.

“It is a privilege, not an obligation, to celebrate and to participate in Mass,” he said. “I’ve seen people coming to communion looking like the walking dead. This is good news we’re celebrating – a win.”

NEXT: Sure, losing hurts, but character shows in handling defeat