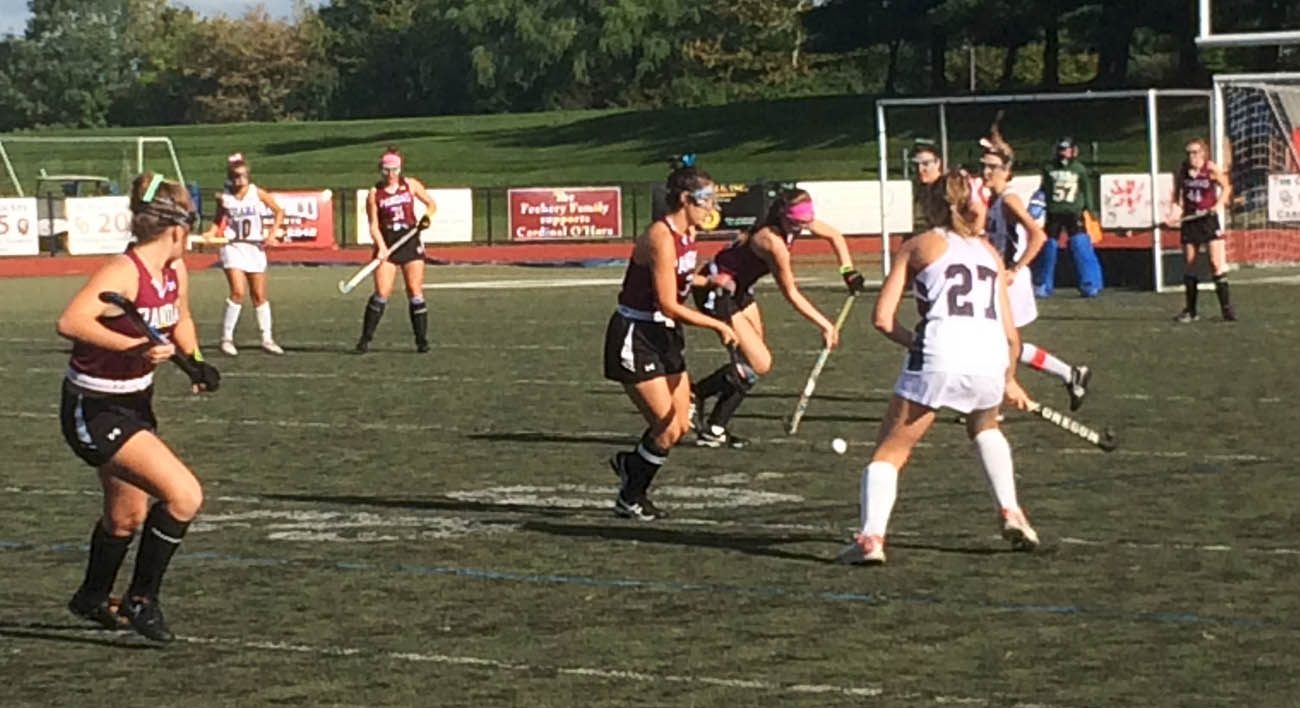 The Lady Lions of Cardinal O'Hara outlasted the Pandas of Bonner-Prendergast in a Catholic League field hockey game Oct. 10. (Photo by Dan McCarty)

It was the scene of a heated rivalry as the Cardinal O’Hara Lions’ field hockey team hosted longtime foe Bonner-Prendergast Pandas Oct. 10. Although Bonner-Prendie took a quick 1-0 lead, the Lions roared back and defeated the Pandas, 2-1, in a Philadelphia Catholic League (PCL) match.

O’Hara simply played all out for 60 minutes and teammates worked together throughout.

At this point in the nearly complete regular season, Archbishop Carroll stands atop the league with a perfect 9-0 record, followed by O’Hara at 8-1 and Bonner-Prendie at 7-2. All three schools, in addition to Archbishop Wood and Archbishop Ryan, have clinched playoff berths.

This year has been a rebuilding process for the Pandas as there is only one senior on the roster in forward and midfielder Katie Caruso.

“We have to get the ball down together,” said Horan. “It’s not just one of us. You have to pass. I just tipped it in.”

Still holding on to a 1-0 deficit, O’Hara used a time out with 11:20 to play in the opening half. It took some more time for the score to change but it did so when forward Katie Shallow found the net with 3:31 in the period, and it was a 1-1 game.

“It tied it up,” said Shallow. “We knew we were right there with them the whole entire time.”

Forward Sarah Grassi scored in the second half off Shallow’s assist and O’Hara had the lead for good.

“When we got that second goal, we knew we had it,” said Shallow. “We had all our energy. We knew it was our game.”

Trying to regroup, Prendie took a time out with 3:04 in regulation but those last three minutes elapsed and the clock expired.

“She made great saves,” said Spaeder. “They challenge each other in practice.”

O’Hara’s Shallow has goals in mind for her team to tighten its play heading into the playoffs.

“We can spread out more,” she said. “We can attack the goal more. Our defense is pretty solid. We’re okay there.”

Quarterfinals of the PCL playoffs begin Wednesday, Oct. 24 as the No. 6-seed – as yet to be determined – takes on No. 3 Bonner-Prendie; No. 5 seed Archbishop Ryan travels to No. 4 Archbishop Wood.

One winner of those contests will face Archbishop Carroll as the other will go against Cardinal O’Hara in the semifinals Friday, Oct. 26.

The PCL championship will be settled Thursday, Nov. 1 at 7 p.m. at Conshohocken Proving Grounds.

NEXT: Eagles can teach us how to engage at Mass, says La Salle professor