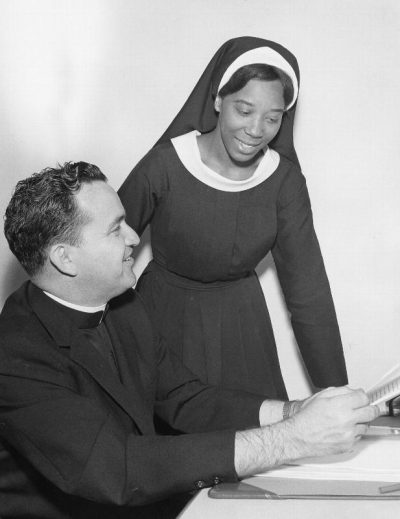 There is an enduring myth that African-American Catholics were largely absent from the freedom struggles of the 1950s and 1960s, which resulted in the legal demise of Jim Crow segregation. Some have even pointed to a 1961 observation that there was no Catholic equivalent of the Rev. Martin Luther King Jr. as an indication of black Catholic complacency during the monumental era.

Among many things, such an observation ignores the fact that black Catholic men, women and youth did play pivotal, and oftentimes leading, roles in local and national campaigns for civil rights.

Beyond the well-documented examples of A.P. Tureaud Sr., the NAACP attorney who successfully sued to end segregation in New Orleans’ public schools, and Diane Nash, the student leader who famously defied Attorney General Robert F. Kennedy’s instruction to suspend the Freedom Rides of 1961, there are countless examples of black Catholics who fought and risked their lives to advance the cause of black freedom and civil rights.

One such example is Mary Louise Smith of Montgomery, Alabama. Two months before the arrest of Rosa Parks ignited a 13-month boycott of the city’s buses and catapulted a young MLK into the national spotlight, Smith was arrested after she refused to give up her bus seat to a white passenger.

Although Smith’s case was initially unknown to local leaders, the 18-year-old cradle Catholic joined four other black female plaintiffs in a federal lawsuit to dismantle bus segregation in 1956. Despite threats against their lives, Smith refused to back down.

During her federal testimony, Smith also rejected the notion that the plaintiffs were sheep following MLK and not activists in their own right. As Smith put it, “We represented ourselves. We appointed him as our leader.”

Black Catholics were also leading figures in struggles against racial segregation and exclusion within church boundaries. Unsurprisingly, black Catholics sometimes drew inspiration from secular struggles for racial justice as they mounted challenges to longstanding anti-black discrimination in the church.

For Patricia Grey, formerly Mercy Sister M. Martin de Porres, the 1955 lynching of Emmett Till was a turning point in her life. “I remember seeing that unforgettable, grotesque photograph of 14-year-old … still in his open casket in Jet magazine … and recalled how incensed I was as a young teenager, wanting to do something and not knowing how to even talk about it,” Grey stated in 2018.

Although Grey would not be among the ranks of young African-Americans who organized the Student Nonviolent Coordinating Committee and pushed the movement forward in 1960, the 18-year-old cradle Catholic and Sewickley, Pennsylvania, native did join another brave group of black youth fighting institutionalized white supremacy.

During the 1950s and 1960s, scores of black Catholic teenagers desegregated the nation’s all-white seminaries and convents. Among this pioneering generation of black priests and sisters in historically white orders were descendants of slaves once owned by the church and young people who had desegregated Catholic schools as children.

Some, like Grey, who desegregated the Religious Sisters of Mercy in Pittsburgh in 1961, had endured earlier rejections from white orders with strict anti-black admissions policies. Eighteen-year-old Patricia Haley had even been arrested for marching for civil rights in Birmingham, Alabama, a few months before she entered the Sisters of Charity of Nazareth in 1963.

And unlike their secular counterparts who desegregated public institutions, those who integrated white Catholic institutes often faced their trials in insolation away from the protection of television cameras and the communities that had nurtured their vocations.

It should come as no great surprise then that this generation of black sisters and priests organized on the national level to confront racism in the church following King’s assassination in 1968.

Their stories and those of other unsung black Catholic activists like Mary Louise Smith constitute an essential part of the narrative of the African-American struggle for freedom and human dignity. As we celebrate Black Catholic History Month, it is imperative that we remember that these stories also represent the American Catholic experience.

Shannen Dee Williams is assistant professor of history at Villanova University. She is at work on her first book, “Subversive Habits: The Untold Story of Black Catholic Sisters in the United States.”

PREVIOUS: All heaven in a hazelnut

NEXT: In choosing Catholicism, African-Americans returned to ancestral Christian traditions