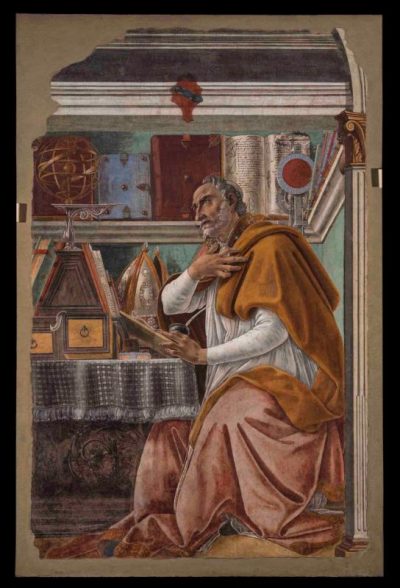 This painting is titled “St. Augustine in His Study” (circa 1480) by Sandro Botticelli. St. Augustine’s teachings on grace and sin, monasticism and traditions related to intercessory prayer are just three examples of African influence on Catholicism. (CNS photo/Muscarelle Museum of Art)

From the 1920s through the 1960s, more than 300,000 African-Americans across the country chose to enter into communion with the Roman Catholic Church. Their choices to become Catholic set them apart from most African-American Christians who were members of Baptist, Methodist, Pentecostal and Holiness traditions.

However, in choosing Catholicism, African-Americans were returning to the earliest Christian traditions of their ancestors. African Christians had figured prominently in shaping the Catholic tradition. They made their imprint on Catholic theology, doctrine and religious practices.

St. Augustine’s teachings on grace and sin, monasticism and traditions related to intercessory prayer are just three examples of African influence on Catholicism. Christian kingdoms flourished for more than four centuries in Egypt, Ethiopia and the Sudan before Christianity had durable roots in Western Europe.

And, although Muslims were successful in establishing their faith throughout North Africa and in parts of sub-Saharan Africa by the ninth century, Christianity did persist in parts of Africa. By the beginning of the 16th century, Catholicism was reintroduced to Africa by way of the trans-Atlantic slave trade.

No matter their individual characteristics, they had their own reasons for choosing Catholicism. Some did so to answer a call to religious life as a priest, sister or brother. Some felt an internal spiritual call to Catholicism. Some joined the Catholic Church because they were married to Catholics, and others were attracted to the faith because they had friends who were Catholics.

There were women and men who found Catholicism to be the truest expression of Christian faith, finding themselves deeply attracted to the rituals and theology of Catholicism. Many were children who learned about Catholicism while attending Catholic schools. It was not uncommon for these children to bring their entire families into the church with them.

Whatever their reasons for were for choosing Catholicism, African-Americans changed the look and the experience of American Catholicism in the 20th century.

November is Black Catholic History Month. Why not use this November to take some time to learn about some of these 20th-century African-Americans who chose Catholicism and who made great contributions to the American Catholic experience? Here are three that you might consider.

African-American children’s book author Ellen Tarry became a Catholic when she attended St. Francis de Sales, a Catholic boarding school for African-American girls run by the Sisters of the Blessed Sacrament in the early 20th century. As a young woman, she was involved in the Harlem Renaissance and in Catholic interracial justice work.

Tarry’s books for children featured aspects of Catholicism and African-American life. She also published frequently in Catholic publications on issues that pertained to African-Americans. Her autobiography, “The Third Door: The Autobiography of an American Negro Woman,” is a fine way to begin learning about her and her contributions to American Catholicism.

Several of the more famous African-Americans who joined the Catholic Church in the 20th century were in the performing arts. Mary Lou Williams is one of the most well-known and interesting of these converts. A renowned jazz pianist and composer, she became a Catholic in 1957. Williams devoted the rest of her life to helping musicians who suffered from various forms of addiction and to writing music for Catholic worship.

Williams came to regard jazz as a gift that God gave her, so that she in turn could to give it the Catholic Church. Jazz inspired her composition of dozens of hymns and four Masses. The most well-known of these Masses is “Mary Lou’s Mass.” An excellent introduction to Mary Lou Williams and her life can be found in “Soul on Soul: The Life and Music of Mary Lou Williams” by Tammy Kernodle.

Finally, an especially fitting way to celebrate Black Catholic History Month would be to read “The History of Black Catholics in the United States” by the late Benedictine Father Cyprian Davis. Father Davis’ work was integral to bringing attention nationally and internationally to the ways that people of African descent helped to develop Catholicism from the earliest days up through the middle of the 20th century. His work helped give rise to Black Catholic History Month.

Many do not know that Father Davis himself also chose Catholicism. From childhood, he was fascinated with the history of Africa and of Catholicism. While a teenager in Washington, D.C., he became Catholic. After graduating from high school, Father Davis entered the monastery of St. Meinrad in Indiana, where he taught church history to generations of students.

Though trained in monastic history, Father Davis is most well-known for developing black Catholic history as a distinctive field study and scholarship around the country, but especially at the Institute for Black Catholic Studies at Xavier University of Louisiana.

Cecilia A. Moore is associate professor of religious studies at the University of Dayton.

PREVIOUS: Black Catholics were at the forefront of the American civil rights movement

NEXT: Black Catholic History Month offers insight and inspiration to all