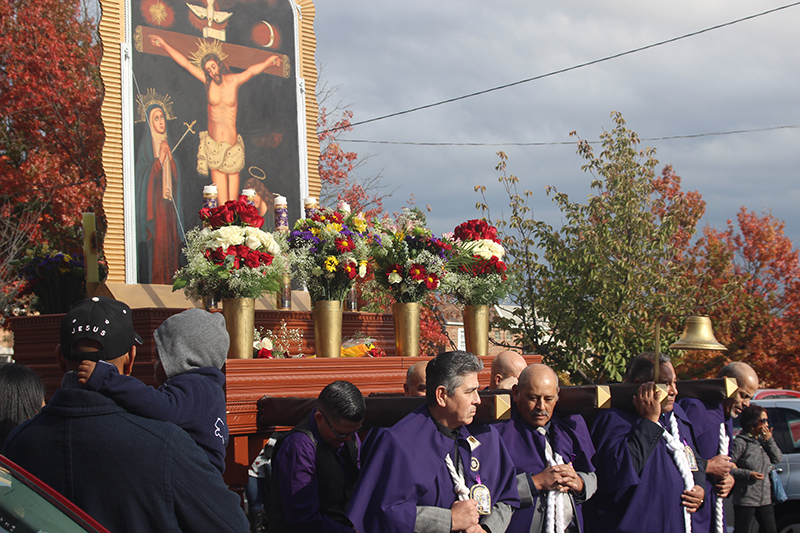 Participants carry an image of El Señor de los Milagros (“Lord of the Miracles”) at an Oct. 28 procession organized by St. William Parish, Philadelphia. The Peruvian devotion, which combines prayer and penance, has been practiced since the 17th century. (Photo by Gina Christian)

The word milagro – Spanish for “miracle” – has a meaning that Julian can feel in his bones. Forty years ago, the Peruvian native was accidentally electrocuted while working in Lima. He survived, crediting his recovery to the mercy of El Señor de los Milagros (“The Lord of the Miracles”).

Originating in 17th century Peru, the devotion centers on an image of the crucified Christ long treasured by Peruvians. An Angolan slave living in Lima painted the scene on the wall of storeroom where a prayer group met. The image inexplicably survived two devastating earthquakes in 1655 and 1687, as well as a misguided attempt by authorities to destroy it in 1671.

In gratitude for the image’s preservation, devotees began to process through the streets of Lima with a replica of the painting. Today the original image is housed in the sanctuary of Lima’s Las Nazarenas Church, and the annual processions through Peru’s capital draw up to 3 million participants.

On Oct. 28, Julian took part in one such procession – not in Lima, but in the city’s Lawncrest section, where Peruvian members of St. William Parish have celebrated the tradition since 1998.

More than 200 area faithful gathered in front of the church as a 400-pound platform holding a five-foot-high replica of the original image was lifted and then carried through the surrounding streets. Taking turns in groups of 20, men and women slowly carried the platform, or anda, as a small horn section played a traditional march.

Many of the participants wore purple robes, symbolic of the devotion’s strong penitential aspect.

“The whole month prior to the procession is one of prayer and penance,” said Sister Rose Patrice Kuhn, I.H.M., who oversees the Hispanic ministry at St. William Parish.

Sister Rose, who ministered for several years in Peru, added that October is often referred to in that nation as el mes morado, “the purple month.” 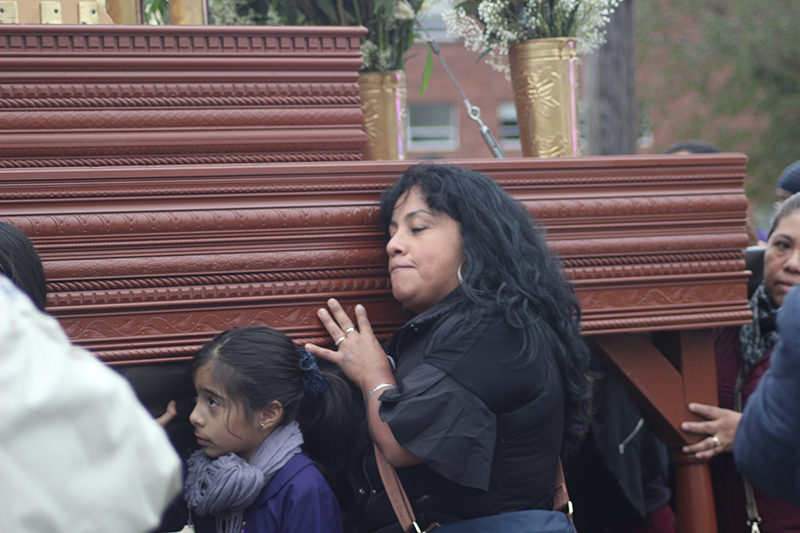 A woman and a young girl help to carry an image of El Señor de los Milagros at an Oct. 28 procession hosted by St. William Parish, Philadelphia. The devotion, which originated in 17th-century Peru, stresses prayer and penance. (Gina Christian)

She said families retell the story of the image so that younger generations will be able to sustain the tradition.

Marian prayers are also a key element of the devotion, with many faithful reciting the rosary as part of the nine-day novena that immediately precedes the procession. The reverse panel of St. William’s image depicts the Blessed Mother with the infant Jesus.

For Father Remi Morales, a native of Peru, seeing the procession in Philadelphia was “even more beautiful.”

“You see them exporting the piety, and they are courageous enough to share their faith in a different context,” said Father Morales, a priest of the Sodalitium Christianae Vitae (Sodality of Christian Life) order who is now in residence at St. Agatha-St. James Parish in Philadelphia’s University City section.

Father Morales observed that the procession, like many other forms of Catholic worship, engaged all of the senses.

“You process, you walk in silence and the music helps you to meditate, while you express beauty through the flowers and the incense,” he said. “It is a prayer and an offering.”

Father Morales pointed out that the image inspired hope, since it reminded beholders that Christ is “the Lord of mercy.”

He added that devotions such as El Señor de los Milagros can provide healing in a church wounded by ongoing clerical abuse scandals.

“Whatever is an expression of the faithful, of the piety of the people, of the simple Catholics, will purify whatever evil is going around,” he said. 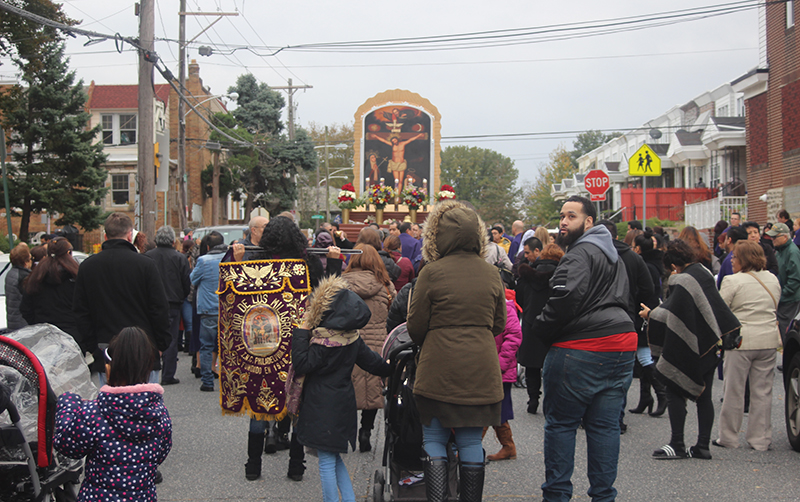 An Oct. 28 procession honoring El Señor de los Milagros (“Lord of the Miracles”) makes its way down a street in Northeast Philadelphia. The Peruvian devotion has been practiced at St. William Parish since 1998. (Photo by Gina Christian)