Film on school’s Vietnam vets shows men taught to love, not to die 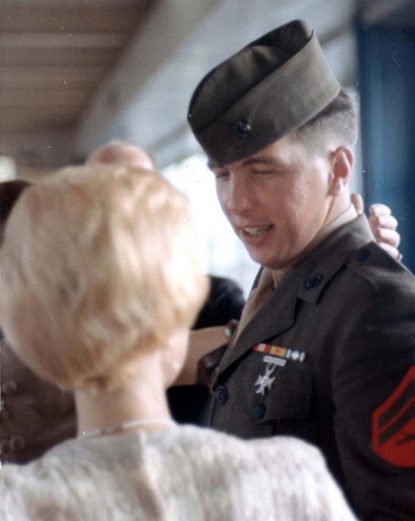 Jim Kirlin, a former Marine rifleman, is seen in a photo spending time with family in Northeast Philadelphia.

Raymond Ahern, Michael Giannini and Joseph Pellegrino graduated from Father Judge High School in 1961. Patrick Corcoran graduated in 1968. They represent the youngest and the oldest among the 27 graduates of Father Judge who sacrificed their lives way too young in the war in Vietnam.

Father Judge, which has the largest number of Vietnam fatalities of an existing non-public school in the country, already has a beautiful memorial to them near the main entrance of the school.

Now there is a feature-length documentary, “Remember the 27 Crusaders,” which premiered at the school Friday evening, Nov. 9, just in time for Veterans Day.

The Vietnam War was really a civil war between communist North Vietnam and autocratic South Vietnam, with the U.S. siding with the South. American troop support lasted through the administration of President John Kennedy, escalated under Lyndon Johnson and by the time the U.S. pulled out under Richard Nixon, there were more than 58,000 American deaths.

It was not a popular war in America; few brass bands welcomed home the sailors, soldiers, marines and airmen at the time, and the dead were mourned mostly by their relatives and comrades in arms. It is only in more recent years they have been given their just honor. 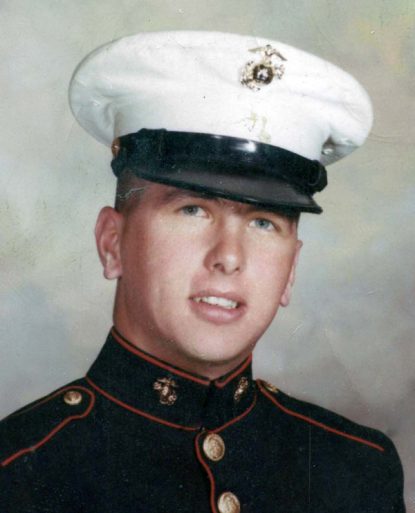 Jim Kirlin, a 1964 graduate of Father Judge High School, in his official Marine Corps portrait. Suffering from PTSD after his service in the Vietnam War and wondering why he survived but his friend and classmate did not, Kirlin went on to lead a film project of the 27 Father Judge Crusaders who died in the war, and the remembrances of their family and friends.

The emphasis is on the families the servicemen left behind, and the working class (with emphasis on working) Northeast Philadelphia neighborhoods and parishes that nurtured them.

Many members of those families, classmates and old comrades in arms were at the showing.

“I served with Michael Kilderry (’64),” said Jerry Tillery. “I put him on the helicopter after he was hit. He died 30 days later. This is important because it pays tribute to the families.”

“Everything in the video was real. We are giving life to the families here. These men are not forgotten and they are not just names on a stone wall,” he said.

Caroline Procopio was there for her brother Joseph Gradel, Judge ’64, who was drafted into the Marines. “I think this is great,” she said. “One fellow said it is the families that have PTSD, and I think that is true. It is something you never forget.”

(Watch a trailer of the film “Remember the 27 Crusaders.)

Mary McGorry, the sister of Stephen Miller, ’63, said her brother joined and reenlisted knowing he would be sent to Vietnam. 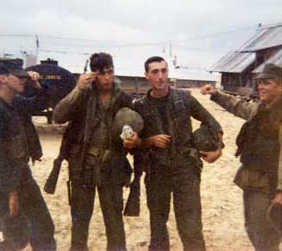 Marine Jim Kirlin, second from left, on duty in Vietnam, 1967.

“He was the oldest of 10 children in our family; I was only 5 when he died,” she said. “There is an extremely grateful feeling in our family for this film.”

Joe Griffin is a Vietnam vet, an advocate for veterans and a radio host on WIBG. He isn’t a Judge grad but a Cardinal Dougherty grad, but his school, now closed, also had 27 fatalities in Vietnam.

“What they learned in the streets and in their homes made them great soldiers,” Griffin said. “We weren’t taught how to die. The military taught us how to shoot weapons. In school we were taught to love.”

The idea for the documentary traces back to 2001, explained Jim Kirlin, class of ’64, who is himself a Marine rifleman and Vietnam veteran. That was the year the school hosted the traveling replica of the Vietnam War Memorial in Washington with the names of all the fallen inscribed on it. 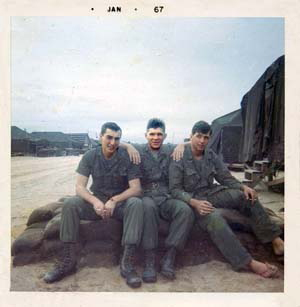 Marines finishing a day on patrol in January 1967 in Vietnam, and drying their feet from jungle rot, include from left Gary Bruske, who was later killed in action; Paul Boyle and Jim Kirlin.

Kirlin gave a talk at that event. He’d seen a lot of combat but came home without a visible scratch. The invisible stuff was there, although it took time for him to realize it. He was living with PTSD (post-traumatic stress disorder), which goes hand in hand with traumatic experiences, as well as survivor guilt. Why was he alive and his classmate Joe Gradel dead?

That’s when the thought of actually telling their story began to develop, although the film would take years to achieve.

Thanks to the skill of Shawn Swords and John Ricciutti it began to take shape and developed a life of its own. It became not as much a story of the men who sacrificed their lives but of the impact they had on the lives of those who they left behind.

“The vision developed as we went along and the family narrative became stronger and stronger,” Kirlin said.

There were five showings of the documentary in the past week and more planned in other places down the road, he said. 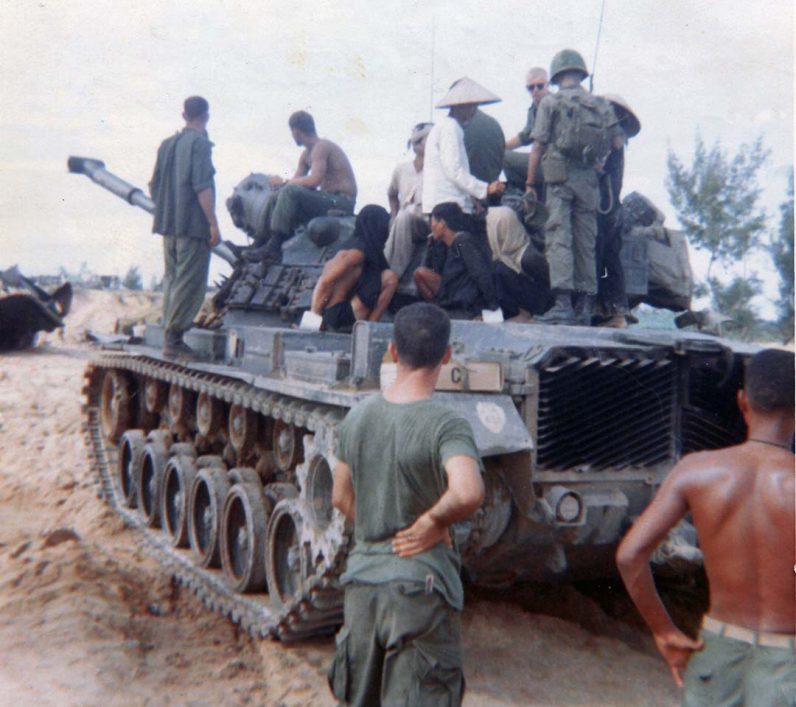 Marine Jim Kirlin joins a patrol in 1967 Vietnam on a tank transporting prisoners.

NEXT: Kids open up new world by building a library of their own