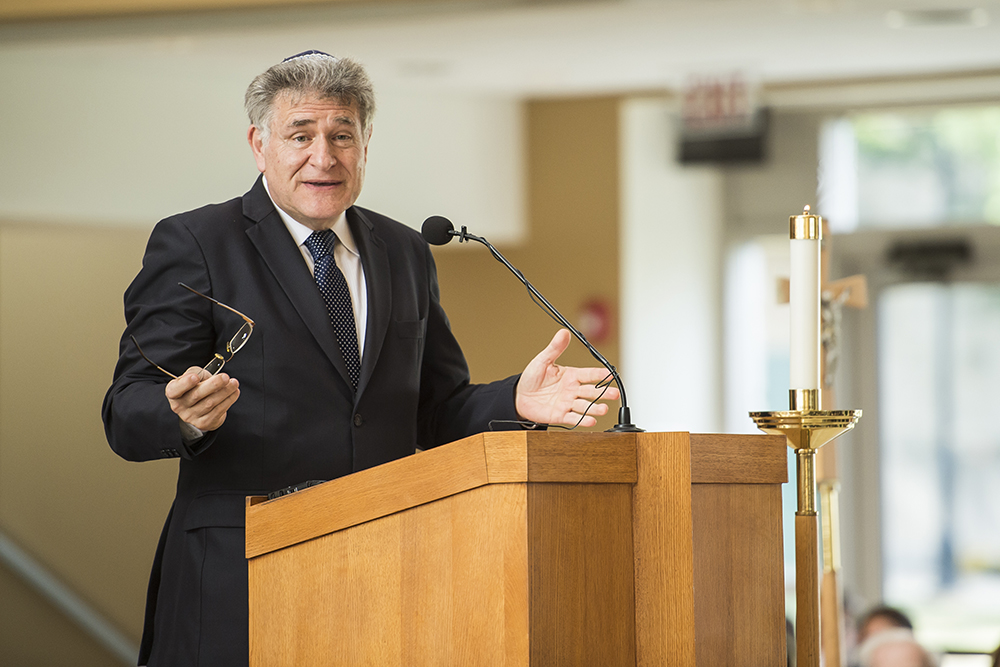 Rabbi Abraham Skorka of the Institute for Jewish-Catholic Relations at St. Joseph’s University in Philadelphia says that the task of ending anti-Semitism requires “a lot of spiritual courage.” A native of Argentina, Rabbi Skorka has worked with Pope Francis for decades to promote dialogue between Jews and Christians. (Photo courtesy of St. Joseph’s University)

In the wake of last week’s mass shooting at a Pittsburgh synagogue, a rabbi and close friend of Pope Francis noted that the roots of anti-Semitism are deep and complex.

“The history of anti-Semitism is a very long one, with more than 2,000 years of manifested hatred against Jews,” said Rabbi Abraham Skorka, a visiting professor at St. Joseph’s University in Philadelphia and member of that school’s Institute for Jewish-Catholic Relations (IJCR). Founded in 1967, the IJCR is the oldest university center of its kind in the U.S. created in response to the Second Vatican Council’s call for increased interfaith dialogue.

The Oct. 27 massacre at the Tree of Life Synagogue, which left 11 dead and six injured, is believed to be the worst anti-Semitic attack in recent U.S. history.

Now in custody, suspect Robert Bowers had shouted “all Jews must die” before opening fire on worshipers, most of whom were senior citizens. Bowers had previously left a trail of similar comments on his social media accounts, and allegedly repeated the epithets after his arrest.

Reflecting on the tragedy, Rabbi Skorka noted that Bowers was likely “influenced by all kinds of hate propaganda” against Jews and other groups – messages that are rapidly spread through nonstop negative news and commentary.

“If you analyze the media, the bad news and the scandals take special place,” said Rabbi Skorka, adding that Pope Francis had emailed him recently “with sorrow about this point.”

Rabbi Skorka identified such imbalance as “one of the great problems of our day,” and called for a “counter message” that included “the news of love and good works.”

Throughout his academic and rabbinical career in his native Argentina, Rabbi Skorka worked extensively with the future Pope Francis, using media channels to promote dialogue between Christians and Jews. The two hosted over 30 television programs and co-wrote “On Heaven and Earth,” which recapped their wide-ranging conversations on topics such as faith, atheism, abortion, homosexuality and globalization.

As with most major issues, Rabbi Skorka noted, anti-Semitism is the result of “not one factor, but many.” 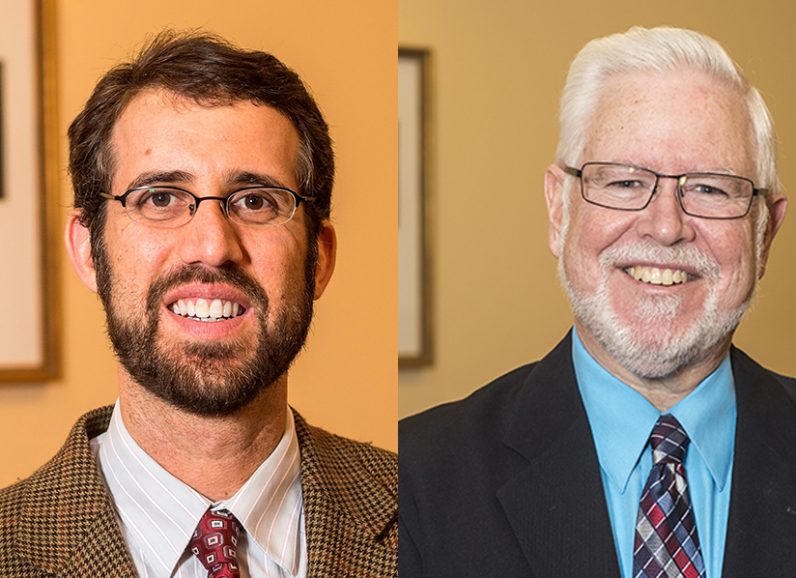 Gregerman, who is also an assistant professor of Jewish studies at St. Joseph’s, pointed out that European Jews – six million of whom were murdered in the Holocaust – have historically faced widespread persecution, while “American Jews have largely been shielded” by comparison. As a result, he said, “there is almost never any government or official support for anti-Semitism” in the U.S., unlike in Europe.

At the same time, Gregerman said, the many memorial events held in the wake of the Oct. 27 attack demonstrate “a clear sense” of general solidarity between American Jews and various religious and ethnic groups in the U.S.

The IJCR sponsored one such commemoration on Oct. 29, at which 110 attendees – representing a mix of students, faculty, staff and local residents – gathered for an interfaith service at the university’s “Synagoga and Ecclesia in Our Time” sculpture.

The work, which was blessed by Pope Francis in 2015, depicts Christian and Jewish friendship through two female figures representing each faith tradition. In medieval times, the image portrayed Judaism as defeated and blindfolded by a victorious Christianity; the updated image, crafted by Philadelphia sculptor Joshua Koffman, renders both figures “with nobility and grace,” according to IJCR director Philip Cunningham.

The Oct. 29 service was one of several signs of hope in Jewish-Christian relations, said Cunningham, who is a professor of theology at St. Joseph’s.

After the Pittsburgh attack, students at Pope John Paul II High School in Royersford emailed a letter of sympathy and support to fellow teens at the Jack M. Barrack Hebrew Academy in Bryn Mawr. Cunningham said the exchange was part of a relationship the two schools had developed through the IJCR.

He added that such “grassroots” outreach is a key part of the IJCR’s efforts to promote interreligious dialogue, which often takes place only at clerical or academic levels.

Cunningham also pointed out that anti-Semitism can manifest itself in more subtle ways that require examination. Individuals who profess tolerance can often find themselves exhibiting quite its opposite to blend in with certain social groups – a phenomenon behavioralists (borrowing a linguistics term) sometimes call “code-switching.”

Cunningham cited the example of theologians who claim to support Judaism’s ongoing role in salvation history, then backtrack when among fellow Christians who disagree. 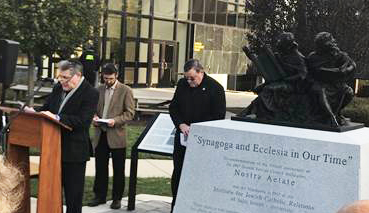 Rabbi Abraham Skorka speaks at a St. Joseph’s University interfaith service held in response to the Oct. 27 mass shooting at a Pittsburgh synagogue. The Oct. 29 service took place before “Synagoga and Ecclesia in Our Time,” a sculpture depicting restored Jewish-Christian relations.

“I think we as a church are only partially along the road of re-understanding who we are when we think positively of Jews and Judaism,” said Cunningham. “Many of our teachings are predicated on a negative view of Judaism, and a new understanding hasn’t really transformed or permeated us at a deep level.”

Rabbi Skorka added that the task of healing ancient wounds and forging true friendship between Christians and Jews is an ongoing one that requires “a lot of time, many individuals, and a lot of spiritual courage” in order to alter the course of human history.

“We are in the middle of a process, with the hope that God will bless this process,” said Rabbi Skorka. “This is not going to be the story of a select group of rabbis and priests, but of the simple person, the lay person, the everyday person.”